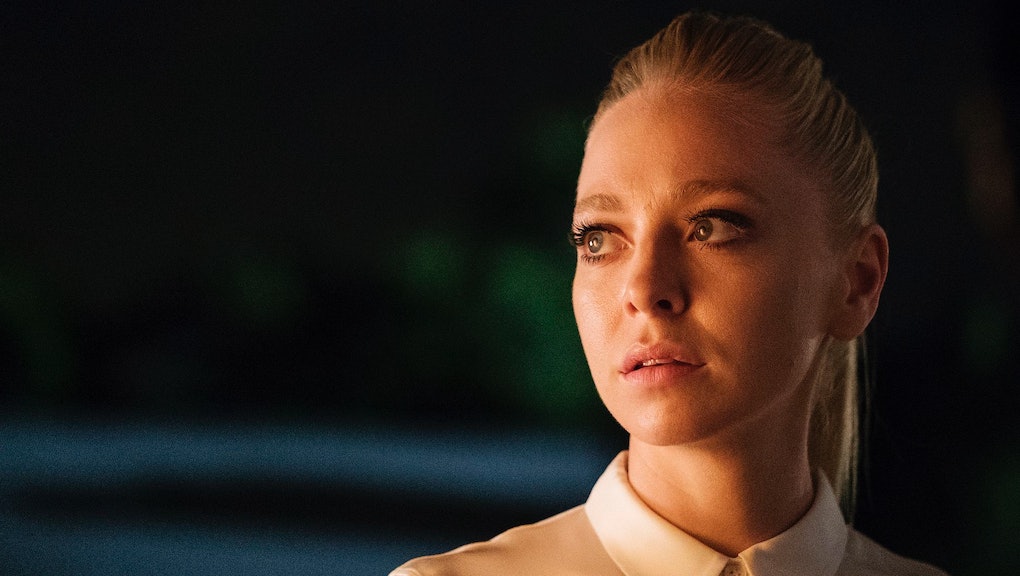 Do we say this every time? Perhaps. But it remains true: The first half of Mr. Robot's season two finale really was the strangest episode of the series yet.

(Editor's note: Spoilers ahead for the second season of Mr. Robot.)

The episode didn't offer up any clues as to whether Darlene and Cisco could've survived the shooting at the diner, but we did learn about a lucid dreaming technique Elliot inherited from his friend "Sam" — a not-so-subtle nod to series creator Sam Esmail.

Elliot did this to try and flip the script on his Mr. Robot alter-ego — watching him for a change instead of the other way around. In doing so, he essentially became an audience member of his own show. But as trippy as it was watching Elliot watch himself, it was rooted in a sense of realism because of the show's Fight Club-esque conventions for its protagonist.

Other encounters in the episode, however, lead viewers to question the show's reality — which yes, is a consistent theme on Mr. Robot. But the series is careening itself to a huge reveal next week, one that could irreversibly pivot Mr. Robot in a new direction. These encounters are the evidence:

Angela's quiz with the little girl before meeting Whiterose

A kidnapped Angela is driven to what seems to be the suburbs. She's escorted into a dark room — barely lit by an aquarium — and a small desk lies in the middle with a copy of Lolita, a bright red telephone and an archaic computer. She's left there by her abductors until a little girl walks into the room and begins to ask her questions in the guise of a game called "Land of Ecodelia."

Here's where things get weird: the little girl bears a striking resemblance to Angela, and the aforementioned game is an obscure reference to a scholarly argument that psychedelic drugs helped give rise to the technology that created computers. Then, there's the quiz the little girl has for Angela, which starts with a casual icebreaker question: "Have you ever cried during sex?"

Viewers are forgiven for assuming Angela was in a dreamlike state — this seemed too weird, even for Mr. Robot's standards. However, a flummoxed Angela eventually takes to answering the questions; correctly, apparently, as Whiterose reveals herself to her, and says she will speak with Angela for 28 minutes — that's very generous when we're talking about Whiterose!

But the conversation only adds intrigue to the Dark Army's plan, offering little in the way of answers. Whiterose explains that Angela's mother and Elliot's father dying while working at Evil Corp were part of a greater plan — their deaths, in part, will help "take humanity to the next level."

Unfortunately, the rest of their conversation is left off-screen, and Angela isn't seen again until she appears at the doorstep of her lawyer's house. She has an unsettling smile, but urges her lawyer to drop the legal case against Evil Corp. Whatever Whiterose told her — whether it's the crux of the Dark Army's plan or winning over Angela's "belief" — it seems to have worked. Fans will just have to wait until next week to find out what that is.

Tyrell finally showed up! After teasing the fate of Tyrell Wellick for nearly the entire season (which wasn't frustrating at all), everyone's favorite Patrick Bateman impersonator finally makes an appearance while Elliot tries to figure out what Mr. Robot is hiding from him. Mr. Robot, it turns out, was working with Tyrell all along on their mysterious "Stage 2" plan alongside the Dark Army.

That means, of course, that Mr. Robot lied to Elliot when he said that Tyrell was dead. Or did he?

Give Elliot credit: He's been duped in this show so many times that he's constantly questioning his own reality. Remember that he had no idea Mr. Robot was a figment of his imagination in season one, or that Darlene was his sister. Hence, while Tyrell and Elliot take a cab to a mysterious location, Elliot frantically asks the driver if he can see the man sitting next to him.

The frustrated driver mouths off in another language, and kicks them out of the taxi. While Reddit is sure to try and translate what the driver said, we never actually got an answer to the question. It's not out of bounds, then, to think that Tyrell is another figment of Elliot's imagination.

This doesn't mean that Tyrell was never a real character. His wife, Joanna, doesn't recognize Elliot as her husband. Instead, it's possible that Tyrell really was shot and killed by Elliot after the fsociety hack was executed in the season one finale, but in the process, Tyrell became another alter-ego for Elliot to assume. This one, in the form of Tyrell, ostensibly deals with the Dark Army.

Worth noting: Nobody else has dealt with Tyrell. Joanna has received gifts from him, and weird phone calls where he's just breathing on the other end. We'll have to wait on Tyrell's real fate until the second half of the finale next week, but in the meantime, this beautifully symmetrical screenshot (framing matters a lot to Esmail) from the preview is food for thought.

Is Mr. Robot about to open up new science-fictional possibilities?

What started as a series praised for its realistic portrayal of hacking is seriously teasing some sort of sci-fi element that's yet to be explored. The evidence is piling up: Whiterose talks about humanity reaching some new level; an episode this season was called "Operation Berenstain," a seeming reference to the theory of alternate universes; and this week's episode featured several tracks from the Back to the Future soundtrack (a movie Elliot and Darlene used to watch as kids, mind you).

Considering how much detail Esmail puts into the show, none of this is coincidental. What matters now, is what this means for the show and its future.

Your guess is as good as ours, but something huge is going to be revealed next week. Either that, or Mr. Robot is going to pull the biggest shark-jump since the idiom's originator.