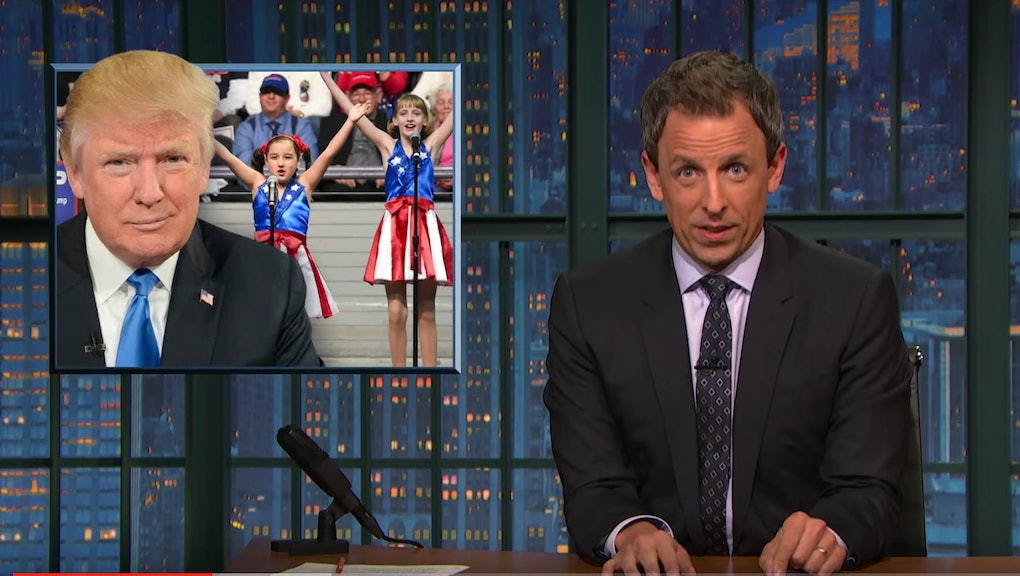 Seth Meyers takes a Closer Look at the Trump Foundation, which isn’t that charitable

Donald Trump has a lot of money — and he certainly likes to talk about it — but how does that translate to generosity? On Wednesday's episode of Late Night With Seth Meyers, the host took "A Closer Look" into Trump's charitable efforts, and the real estate mogul's biggest interests seem to be, sometimes literally, himself.

Citing the extensive research from the Washington Post's David Fahrenthold, Meyers noted that Trump has given less than $10,000 out of his own pocket since 2008, whereas his campaign has claimed that he has given over $100 million to charity.

"So his campaign claims $100 million, but reporters can only find $10,000," Meyers says. "That's like saying you have a private jet when you only have a private Jetta."

But Trump has no qualms in using this money for his personal use, such as buying a Tim Tebow signed helmet and — in one particularly absurd instance — purchasing a six-foot-tall painting of himself with Trump Foundation funds. It was something even President Barack Obama had to joke about when he was on the campaign trail for Hillary Clinton.

While Meyers did enjoy "Stand-Up Comedy Obama," the unfortunate reality, despite these findings, is that Trump is still quite close to Clinton in the polls.

"So to recap, Trump won't give money to children who perform at his rallies or staffers who work on his policy proposals, but he will use other people's money to buy signed football helmets and a giant painting of himself," Meyers concludes. "And he still could be our next president."