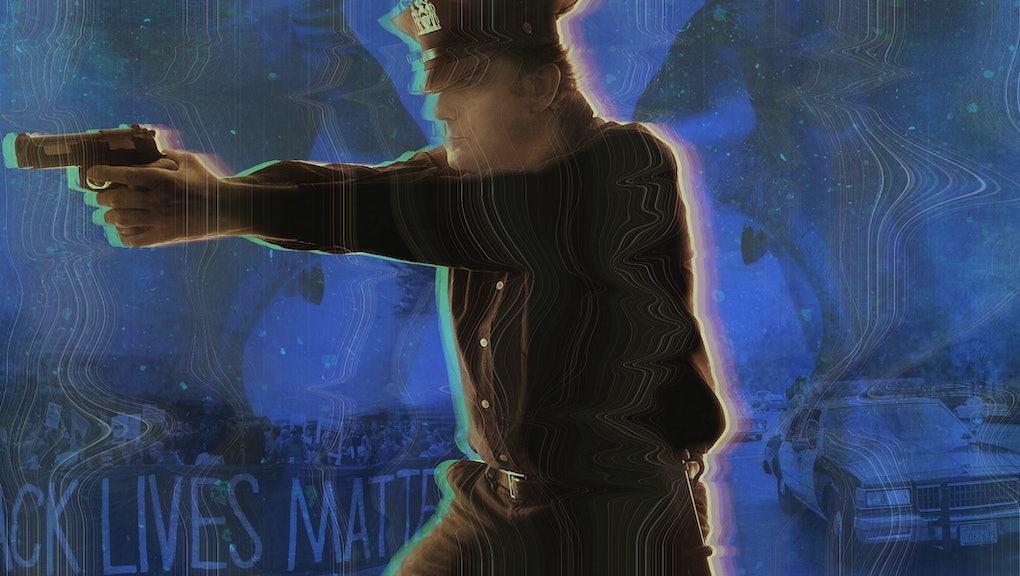 To stop police brutality, we must end the epidemic of PTSD among officers

On Jan. 20, 2000, Arizona state troopers chased a stolen car for miles on live TV. When they blew out the tires in a parking lot in Phoenix, Officer David Mogel approached the car. The only thing he knew to expect was that the driver, Wayne Williams, was still packing the shotgun he used to jack the car in the first place.

Mogel pulled the passenger-side door open. When Williams reached for the shotgun and swiveled the barrel Mogel's way, the officer fired and fired until Williams was dead.

"I had to shoot," Mogel said. "By the time I finished shooting, the shotgun was on the passenger seat, facing me."

Mogel had seen two fellow officers die in the line of duty, but he'd never killed a man. It didn't take long for the trauma to set in. Mogel became depressed. Eventually, his thoughts turned suicidal.

At first, he kept quiet about his mental state. His superior officers came up in the 1960s, before the phrase "post-traumatic stress disorder" made it into the American Psychiatric Association's diagnostic manual. Police culture demands bulletproof bravado, and Mogel didn't want to seem weak. He was reassigned to auto theft detective work after the shooting, but was still carrying a weapon, chasing criminals. He began to worry that he could be a danger to himself and others.

"My inner demons were boiling up inside me, and I had no outlet," he said.

When you think of PTSD, you might imagine the mental demons of an Iraq War veteran. But post-traumatic stress doesn't have to come from a single dramatic firefight or attack. It can build up over time in response to the everyday realities of police work: terse verbal confrontations during routine traffic stops, small scuffles with suspects, showing up at a crime scene to witness the aftermath of violence. Trauma can affect officers who work from their desks too, like dispatchers who field harried cries for help or investigators who handle cases of child abuse and human trafficking.

Badge of Life, a nonprofit that seeks to address trauma on police forces, estimated 216,000 officers — almost 20% of police in the United States — currently experience PTSD to some degree or another. By way of comparison, only 8% of the general population experiences PTSD. There are no accurate estimates of how many police with PTSD go untreated, but those who study the phenomenon insist that it is the vast majority.

Over the past two years, the Black Lives Matter movement has drawn attention to the epidemic of violence against communities of color, highlighting the way racism informs police brutality. But little attention has been paid to the possible link between PTSD and excessive use of force among police.

"PTSD is looked at as more of a combat issue," said Ken Allen, a union leader who's called for more attention to the prevalence of PTSD he sees among his officers in Atlanta. "But it can be traumatic just to be the responding officer to an extremely traumatic traffic incident, or a car hitting a baby in a stroller."

An undiagnosed epidemic: Ellen Kirschman, a psychologist who works with first responders, calls these "microtraumas" — the small stressors and low-level violent encounters that can lead to PTSD. Over time, these microtraumas lead to what psychologists call "hypervigilance," a state of alertness that leads someone to constantly assess their surroundings for possible threats. The watchfulness of patrolling a beat turns into permanent anxiety. Even out of uniform, hypervigilant police officers will watch those around them to see whose hands are visible. They'll sit with their backs to the wall at all times so they can face the whole room with ease. They often perform perimeter checks of typically safe spaces, like their own homes.

Eventually, this behavior bleeds from their jobs into their personal and family lives. Those with PTSD sometimes develop drug and alcohol dependencies, or find refuge in activities like gambling. For example, more than a quarter of military veterans diagnosed with PTSD also experience substance abuse.

PTSD can also lead to violence. Police officers often justify violent outbursts by saying they felt threatened by a suspect or a situation. Former Officer Eric Casebolt has been immortalized in a video that shows him rounding up, arresting and tossing a black girl to the ground at a pool party in McKinney, Texas. When Casebolt resigned and apologized for his actions a few days later, he revealed the cause of his overreaction: extreme emotional stress.

Earlier that day, Casebolt had been called to another pool where a man had shot himself in the head in front of his partner and children. Casebolt comforted the widow and photographed the blood-soaked body before rushing off to another suicide call, where he helped talk a teenage girl down from jumping off a roof.

"The nature of these two suicide calls took an emotional toll on Eric Casebolt," his lawyer said at a press conference a few days after the incident. "They serve as a reminder that while police work is often dangerous, it is fraught with emotions and family tragedy."

"With all that had happened that day, [Casebolt] allowed his emotions to get the better of him," she added.

Aside from a few watchdogs like Badge of Life, which conducts surveys on mental health among police, there's little research on PTSD among the country's 15,000-plus police departments.

But research on the U.S. military shows PTSD can lead to episodes of violence. Studies on vets with PTSD have found them almost three times more susceptible to domestic violence than those in the general population. One study showed they are given to "impulsive aggression" far more often than veterans without the diagnosis.

"When you look at police officers who are hypervigilant, constantly on edge and exhausted by adrenaline, it's a prescription for disaster," said Allen Kates, who spent six years researching and interviewing hundreds of officers about trauma on the job before writing CopShock, the leading manual on police PTSD.

Stoicism and trauma: Public outrage forced Casebolt to admit his traumas, but the experts Mic spoke to said most police officers just hide them. The idea that other officers might find out they're feeling emotionally unstable is one of the biggest reasons officers don't get help; no officer wants their partner to think they can't be relied on to have another officer's back. An officer's role as a guardian, their trustworthiness, is central to their personal identity.

But the reluctance to seek help is bigger than macho culture — there are systemic forces that threaten an officer's livelihood if they seek treatment. In police departments large enough to retain on-staff psychologists and psychiatrists, mental health professionals often report all findings to upper management, said experts who study PTSD among police. It's a built-in breach of confidentiality that prevents individuals from disclosing dirty laundry they don't want aired to their superior officers. This stoic culture has a chilling effect among officers who feel like they might need help.

Prevention vs. intervention: There are few holistic policies in place to address PTSD among police aside from basic psychological screening at the start of an officer's career. None of the experts Mic spoke to for this story could identify a police reform platform that includes mental health treatment for officers as a top-line priority.

"Officers get a little stress management sometimes in the academy, but that's not enough, and it's at the wrong time," Kirschman, the psychologist, said. "It's like doing premarital counseling with people who are desperately in love with each other."

But officers need regular treatment throughout their careers. Among the proposals proffered by researchers: requiring that police undergo evaluations after traumatic incidents, creating a more confidential psychiatric environment and reassigning officers away from beats where they're likely to revisit the scene of a traumatic event.

Some police need more than counseling. When officers no longer feel like they can wear a badge, what they need is to take it off. Workers' compensation boards, however, have fought vigorously to stave off officers who seek out stress pensions — early retirements for those who experience psychological trauma too severe to continue as an armed officer.

Take Paul Hipple, who in 1984 found himself locked on the ground in a wrestling match with a knife-wielding cocaine dealer. Hipple had been in plenty of fights before in his 16 years undercover — he'd been stabbed, bitten by dogs, run over by two cars and jumped by a gang that threw him out of a bus window in the Bronx, in New York City. But when the man he was wrestling with slashed his left hand, Hipple froze and was unable to pull the trigger on his firearm. He never returned to work.

Three courts rejected him after years of trying to sue for a full disability pension, saying his work-related traumas were too regular for any one to stand out as extraordinary. When the pension board reversed its decision in 1989, Hipple told reporters he thought officials had been wary of setting a precedent for officers with a history of work-related trauma seeking disability pensions.

A data problem: Nick Selby, a Texas detective who works on police reform, says that the problem with tackling police violence is a poverty of data. "People yell about police reform, but because we have no data on problems around policing, people just throw paint at the canvas," he said.

In 1994, a research brief on police use of force from the National Institute of Justice said there wasn't enough research to show whether or not police stress was a driving factor behind excessive use of force. Little work has been done on the issue since. The culture of silence surrounding PTSD among police only makes the problem harder to study.

A discussion about mental health among police is not a substitute for the long-needed conversation about the overpolicing of people of color in the United States. But it's hard to deny the role of PTSD as a root cause of violent escalations. If PTSD is a contributing factor to police violence, mental health must take its place at the center of police reform platforms.

It's been 16 years since David Mogel's fateful encounter in northern Phoenix. He is now a successful electrician with a million-dollar business and eight employees. He refers to his success since the incident as "post-traumatic growth."

Still, certain noises or smells set him back. He does what he can to avoid returning to the roadside where he was forced to kill or be killed. If he has to drive by a certain hospital where fellow officers died after being shot on the job, he's filled with dread.

He watches the news and sees presidential candidates whip up noise about police reform. He sees police fire guns and be fired upon, and wonders if they're alright.