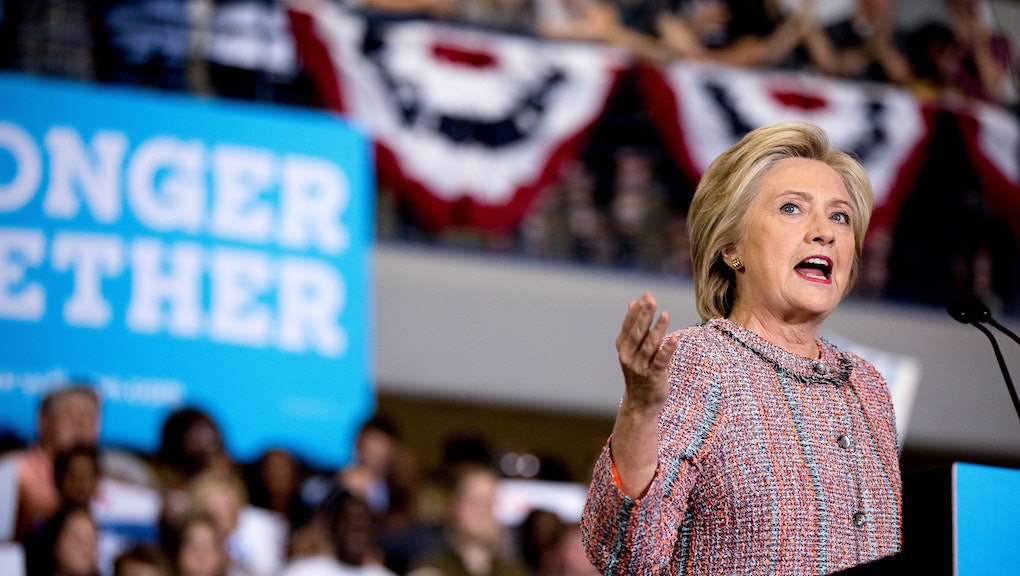 GREENSBORO, N.C. — Hillary Clinton came here on Thursday after a three-day break from the public eye, seeking to put a week's worth of negative headlines behind her and set the stage for the final stretch of the presidential campaign.

"I'm going to close my campaign the way I began my career and the way I will serve as your president, should you give me that great honor — focused on opportunities for kids and fairness for families," Clinton told the assembled crowd of several hundred supporters in a cavernous gymnasium on the University of North Carolina at Greensboro campus.

Clinton's return to the trail marked the beginning of a crucial stretch in the campaign ahead of the first presidential debate, scheduled for Sept. 26. Clinton and Trump are virtually tied in national polls, and Trump has made up significant ground in battleground states. Clinton holds a slim 1.5% lead over Trump nationally in the RealClearPolitics average. In North Carolina, her lead is a mere 0.6%; in Ohio, Trump's ahead by 1%.

The events of the past week — Clinton's "basket of deplorables" remark, her appearing to faint at the 9/11 memorial and the subsequent revelation that she had withheld her pneumonia diagnosis for two days — have accompanied the tightening in the race, if not caused it. In any event, the nature of the race has injected a fresh round of anxiety among prominent Democrats.

A senior Democratic official familiar with the campaign's thinking said the Clinton camp had expected the race to tighten for weeks and planned no fundamental shift in course before the first presidential debate. The source said the campaign is reassured by the fact that little has changed in the structural dynamics of the race, citing Trump's continued unpopularity with college-educated women and Latino voters.

The official, who was granted anonymity to describe the campaign's thinking, said the campaign is changing little in their approach after a week of negative headlines, with one exception: a renewed focus on winning over millennial voters, a group that has been overwhelmingly opposed to Trump but has not embraced Clinton as their champion. Recent polls have shown outsized support for Libertarian nominee Gary Johnson and the Green Party's Jill Stein, siphoning votes from Clinton in states like Ohio and Pennsylvania.

To that end, the campaign is dispatching Sen. Elizabeth Warren and Sen. Bernie Sanders, Clinton's opponent in the Democratic primary, to blanket Ohio over the coming days. Both are liberal stalwarts who enjoy broad support among young liberals who enthusiastically backed Sanders in the primaries. They have been slow to come around to Clinton's candidacy, despite a widespread dislike of Trump. The New York Times reported on Thursday that former Vice President Al Gore is also in talks with the Clinton campaign to appear on her behalf.

As polls tighten in swing states like North Carolina and Pennsylvania, the Clinton campaign is focusing on driving turnout among the groups of young voters who were so crucial to President Barack Obama's two election wins. Obama himself rallied supporters in Philadelphia on Tuesday, and Clinton announced she will travel to the city next week before visits to Ohio and Florida.

Clinton's appearance in North Carolina on Thursday, her upcoming swing through battleground states and the deployment of top-level surrogates to Ohio this weekend are clear signs that the campaign hopes to blunt whatever momentum Trump may have in much the same way they dispatched Sanders during the primaries — slowly, methodically and with a keen focus on the fundamentals of the race.

Whether that effort will be able to halt Trump's apparent momentum remains to be seen. The country — and a Clinton campaign that remains self-assured for now — will find out in less than 53 days.