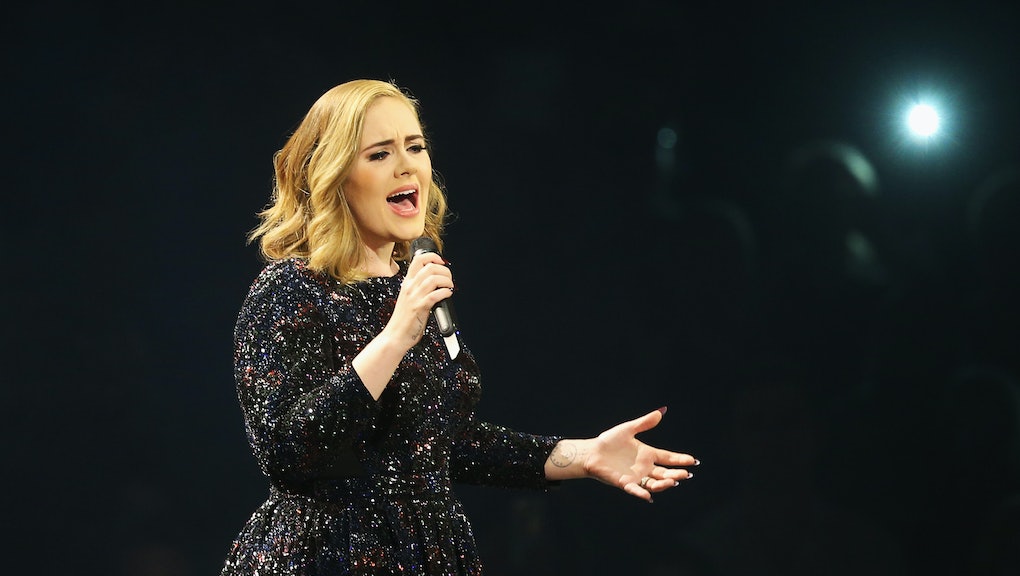 Adele took time out of a concert in Boston on Wednesday to pay tribute to the late singer Amy Winehouse. Winehouse, who died in 2011 — and who Adele has long credited with influencing her career — would have been 33 years old that day.

"I feel like I owe so much of my career to her," the singer said, according to Cosmopolitan. "That first album, Frank, it really changed my life," she added.

"I went to music school when I was 14, and when I was about 15 and a half, Frank came out," Adele continued. She said she'd see Winehouse on TV and in magazines with a pink electric guitar and thought "she was the coolest motherfucker."

Adele owes "90%" of her career to Winehouse, she said. "Because of her I picked up a guitar, and because of her I wrote my own songs, and the songs I got signed on I wrote completely on my own," she said. "If it wasn't for her, that wouldn't have happened."

Adele has talked before about Winehouse's influence on her career. In a 2015 profile in i-D, she said she and Winehouse didn't know each other, but she "adored" her nevertheless.

"If it wasn't for Amy and Frank, 100% I wouldn't have picked up a guitar, I wouldn't have written 'Daydreamer' or 'Hometown' and I wrote 'Someone Like You' on the guitar too," the singer said.

"Contrary to reports, me and Amy didn't really know each other, we weren't friends or anything like that," she continued. "I went to Brit School and she went for a little while. But a million percent if I hadn't heard Frank this wouldn't have happened. I adored her."

At Wednesday's concert, Adele dedicated the song "Make You Feel My Love" to Winehouse, according to Cosmo. That day, she also tweeted a birthday message in memory of Winehouse.