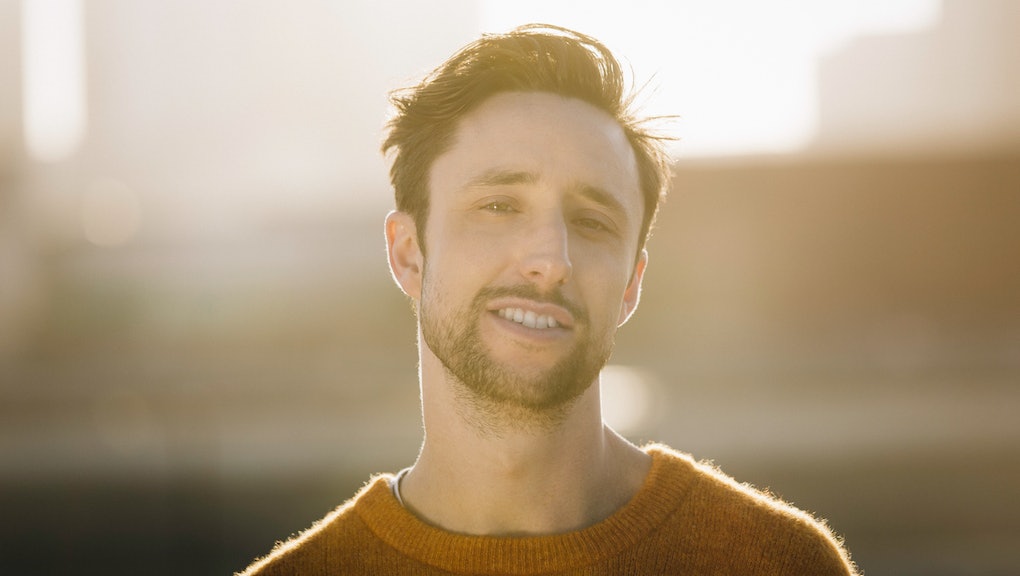 How to Dress Well on 'Care,' pleasure and the joy of dismantling heteronormativity

"Pop, but not populist," is the way Tom Krell once described his musical ambitions as How to Dress Well for Pitchfork. "I want to be No. 1 on Billboard, but I want to do it on my own terms."

Those words still resonate with Krell, perhaps even more now than when he first said them. "That's a very good quote of mine," Krell said when we met for an interview Monday, smirking while listening to himself of two years ago. "I actually think that this record, Care, is the first record I've made that makes good on the promise of that quote."

How to Dress Well's Care, out September 23, offers a sophisticated read of the role pop plays in our lives. The genre doesn't have to be inoffensively maximal or bubblegum sweet to be successful, the album suggests. Pop can lean into joy and pleasure, treating each with the respect they deserve, and still be a high aesthetic achievement.

In this blurring of high- and low-brow, it builds upon the framework of his past works. His past three full-length LPs have earned the rare Best New Music accolade at Pitchfork, a certification few luminaries have managed to achieve. Yet compared to his past, the production on Care is borderline goofy in how bright it is.

Synths that feel at home under the sea on the Little Mermaid soundtrack pepper "What's Up." On "Anxious," chipper strings stab over light percussion reminiscent of Omi's "Cheerleader," buttressing a song about the microfrustrations of social media. The album's lead single, "Lost Youth / Lost You," grapples with how difficult to truly understand love while luxuriating in every crevice of that feeling.

The album is playful and tender — and in this, Krell sees a revolutionary sort of potential. When pop music chooses to reflect life's complexity, rather than blur its clashing colors, it can be a powerful political force.

Mic: Something I've always admired about your music is that it has its catchiness and accessibility, but comes with this sort of weight and significance.

Tom Krell: I'm a bit weird, so I've always thought that I wanted to make music that was really emotionally rich in a way. And the pop music, I didn't find it to be rich like that. Tenderness and pleasure are very difficult to do in pop music. I think it's easy to do like sad, debauched sex, and I think it's easy to do romanticized love. We see that in every pop song ever. But I think once you go a bit more tender, it becomes raw in a way that becomes somewhat confrontational — not in an aggressive way — but a little charged.

I feel that leads into the title. Your last album, you seemed to put a lot of thought into the title, "What Is This Heart?" — with the quotes around it and everything. What does Care mean to you?

TK: When I was writing the lyrics for these songs and demoing them, I started seeing this word everywhere. I had no idea that this word was living so actively in my brain and in my heart. I started just thinking about it like, "What is the deal with care?"

Care is nurturing for growth, but in order to give care, you have to hear somebody's cry for help. You have to have a sympathetic capacity. It's not the same thing as someone being like, "Hey can I borrow $20?" and deciding whether or not you can. It's somebody saying, "I am experiencing frailty or need or lack and I'm asking you to do something for me to soothe that." The demand is ratcheted up a bit.

To ask for care, you have to be able to admit that you have that kind of neediness. It's different than asking for help. It's different than being like, "Am I good to the people in my life?" I called my brother, I called my mom, etc. But am I really, like, giving joy to my mother? am I giving care to my friends? It pushes the question just like one step further into more important terrain.

It seems like this album is more positive, a lighter mood than your previous stuff. I hesitate to say that definitively; I feel that's difficult for people on the outside to assume the emotions that are actually at play.

The last song on the record is called "They'll Take Everything You Have," and it's kind of like sonically bright. Kind of like "The Way It Is" [by Bruce Hornsby and the Range], but in the same way as that song, it's kind of a trick. It's actually a song about 21st-century neoliberal debt economics and austerity and anti-sympathy and the kind of social milieu we're allow to live in if that's we govern ourselves. The violin, post-rock section on that is one of the favorite things I've every record. Super beautiful, super dramatic, but then it comes down into this coda where I sing: "For all your decency, they'll still take everything you have."

There's a tweet of yours I read recently that I wanted to ask you about.

TK: I write a lot of dumb tweets, so this should be good.

You wrote: "lol doing so much press for this record and i'm just constantly getting heated about how anhedonic contemporary culture is!" What inspired that?

TK: A lot of the record is about sex and pleasure and pride and joy. I feel like we have entered a weird phase, where obviously post-9/11, cynical, 21st-century America is where we are. But it's particularly intense now.

The example I always go back to is when I was a little boy, Disney put out a cartoon movie called the Jungle Book that features like a cute-ass dancing bear, and just goofball shit. And now they did a remake of it and it's like a Michael Mann-like: [uber-dramatic synth sound] "Will Mowgli make it out alive? Or will he have to eat the face, of like a..." Whatever. It's just like high-fucking-octane.

It's so mind-boggling to me. I think it has something to do with the way labor is structured under neoliberalism, so that 24 hours a day you're supposed to be advancing yourself as a hirable and manageable subject. So even when you're indulging yourself in entertainment, there's a seriousness to it. I hate this faux-profound seriousness that dominates right now. I think there's actually a political value in taking pleasure and broadcasting that. And just saying "Nope. No return into back into seriousness. No return back into a monetizable blog. Just pleasure."

I'll say this about pop: Have you ever seen Xavier Dolan's film Mommy?

No. Tell me about it.

TK: Well it's a movie about this boy who's extremely troubled and his single mom. He is like a raging, manic, maybe somewhere on the spectrum, maybe developing schizophrenia, mentally unwell boy, and he's been driving his mother up the wall. There's a scene where he comes out and does like a sassy performance into a hairbrush of the Celine Dion song "On Ne Change Pas." It's so touching, and you see them connect so much and there's so much love in it. But it's against the background of this intense struggle.

The pop moment there — and this is what I value in pop music — is this: For a moment there, when Celine Dion sings, "To all the little girls in the world: Never change" — he sings that to his mother, and they're literally in a shitstorm. And then there's just a moment of respite, but that moment is charged by the desperation of life. It needs to register the desperation.

That's why going to the club and party music is so awful, because it doesn't register that like you're going to spend 70% of your weekly earnings at the club if you go for bottle service, or whatever is being suggested in these songs. There's never a moment when there's like a life is really hard. Because it makes it non-populist if you do that. It takes it outside the realm of pure ideology of whatever. When I saw the scene, I was like "Oh, that's what pop music is for."

"Anytime you can hard troll the actual perpetrators of heteronormativity, go for it. That's the wave."

It's interesting, I was looking at the video for "Lost Youth / Lost You" — that song taps into what you've been saying. It's uplifting and hopeful, but it acknowledges that love is extraordinarily hard to know. I feel like the visuals match that well, but it's funny, you read the YouTube comments on it and nobody got it. The comments are all just very confused by the mass of bodies, asking like: "Is he gay now? This is a weird way to come out." I'd love to hear you meditate on the choices you made in that video.

TK: That's funny. I'll have to go back and check that. My music is somehow, in a way that I never could have anticipated, it's like polarizing. I only find it polarizing with men. I mean, there are women that don't like my music, evidently, obviously. But I've never met a girl who's like "Ugh, what is this?" But I've met guys who are like, "Ugh, dude, no way."

I think it's because of a like tenderness in my singing and choices I make aesthetically that certain kind of masculinity is allergic to. There's a certain type of masculinity that just like throws up cloves of garlic and gets like on the preventative, like this mythological tenderness is going to strip them of their manhood and turn them to weeping boy status. I'm down.

Anytime you can hard troll the actual perpetrators of heteronormativity, go for it. That's the wave.

A lot of your songs in the past really delve into death and suicide; this one is focused on love and the life-giving aspects of that. And I'm curious: Which do you think is harder to know? Which is harder to face?

TK: It's interesting. We have a cultural aesthetic legacy of writing songs that are about sad effects. It's much harder for me to think deeply about love and care than it is to think deeply sadness. I can go into sadness and just create from that energy, and we know that like all of our artists are depressed and all of our comedians are depressed. That's almost like trivially true now. So it became like a really compelling prompt, to be like — she said this to me. Damn, that was like beautiful. That was thrilling to me. Why? To dig into those moments to try to drum up something from there.

When I was a teenage boy, I think I was taught that the only thing that counts aesthetically is something that's serious and sad. Either you're serious and sad or you're just trivial. I just wanted to see if I can write a song about love and joy and sex that was like profound, or literally just fun. Freeing from the need to be profound can be profound also.