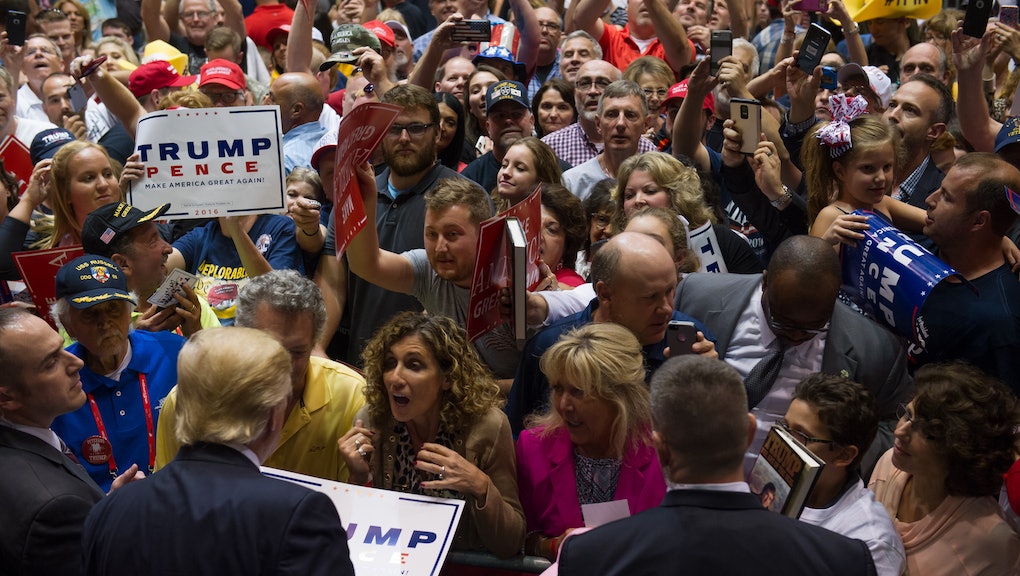 Who are Donald Trump's supporters? Here's who's likely voting for the Republican nominee.

A "basket of deplorables." — Hillary Clinton kind-of apologized for that one. Patriots. Bigots. Nearly whites-only.

There is an endless stream of positive and negative takes about Trump supporters. The record number of Republican primary votes Trump drew — for and against him — has been praised and lampooned by pundits and politicians for months. People who attend Trump rallies have drawn scorn for assaulting protesters while the ties between certain Trump supporters and white supremacy has troubled some.

Many of these charges are unsubstantiated noise from both sides. But exit polls, interviews and studies have created profiles of likely Trump supporters. And some of the data behind Trump's support may be surprising.

A Gallup study of its polling around the views voters hold toward Trump makes a strong argument that diversity changes minds. According to this analysis of responses from more than 100,000 Americans, people's degree of isolation from other races is "strong evidence" to predict whether someone will support Trump. White voters are more likely to support Trump if they have less interaction with blacks, Latinos or other ethnic groups.

This is somewhat reflected in a Vox finding that this is the question most likely to signal support for Trump: Is Barack Obama a Muslim? If you're white and answer yes, according to Vox, there is an 89% chance you will support Trump.

To be clear: Obama is not a Muslim and was born in U.S. The latter is a fact Trump long questioned, though he recently backtracked and says he believes Obama's birth certificate is legitimate.

The stigma that Trump supporters are, at best, wary of other races, and, at worst, white supremacists has stuck with many minorities. Minority groups favor Clinton over Trump by wide margins, particularly members of those demographic groups who are millennials.

The same Gallup study found anxiety about the economy — not actual financial hardship — was a strong indicator of support for Trump. Trump's supporters who have high incomes were more likely to say they were anxious about their economic situations

"To put this in perspective, extremely affluent Trump supporters report almost the same level of economic insecurity as lower-middle-class Americans who do not like Trump," Jonathan Rothwell of Gallup wrote.

A recent Atlantic report on Trump's support offered further confirmation that his supporters are primarily white. But there was a far more interesting revelation: 25% of Trump's primary voters were more affluent white women over 45 — an image contrary to the narrative that working-class white men put Trump over the top.

This data is not mutually exclusive, but it offers insight who favors Trump. White Americans who have less interaction with people of other ethnicities are more likely to support Trump. And people who are extremely worried about the economy — whether they are in economic hardship or not — will be more likely to vote for the self-described billionaire. Trump supporters are also typically older and more affluent — and are not necessarily male.

This profile is a problem for Trump: The general electorate is far larger and more diverse than Republican primary voters. But a surge in working class white support, as the New York Times has observed, could still put Trump in the White House. As polls tighten, Clinton will have to do more than win large majorities of minorities. She will have to keep Trump from locking down a historic level of white support.