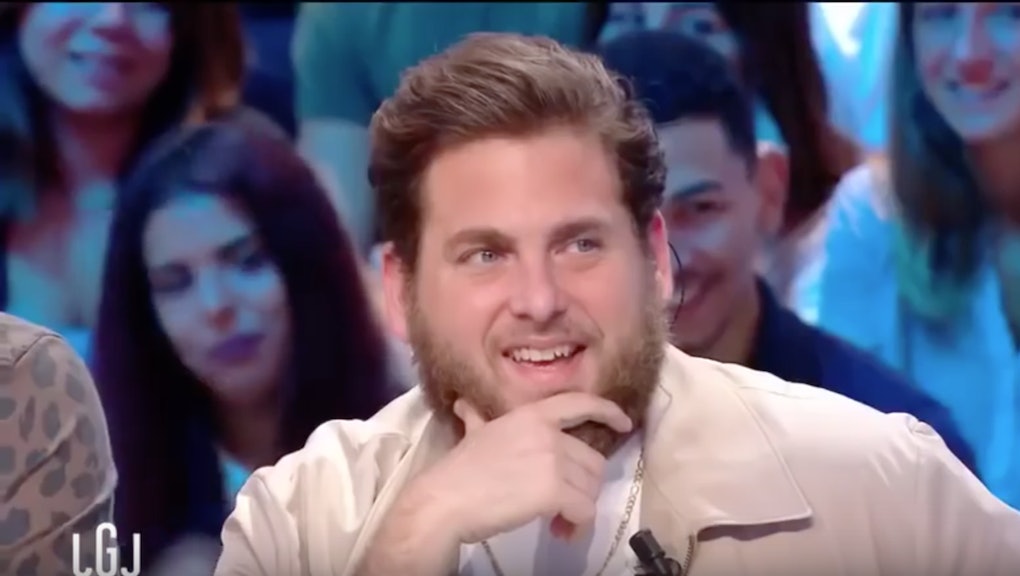 Jonah Hill is no longer promoting his new movie, War Dogs, in France, after the Oscar-nominee was mocked by a French presenter on the CanalPlus program Le Grand Journal. Alongside War Dogs co-star Miles Teller, Hill was chided by Ornella Fleury, the program's weather reporter.

Speaking in French — though Hill wore an earpiece so he could understand in real-time — Fleury referenced Hill's sodomizing scene in This Is the End as the starting point of a faux crush she had on the actor.

"When I saw you get sodomized by a three-meter-tall demon in This Is the End, I told myself, 'Now that's the man of my dreams'!" Fleury said to an unamused Hill.

Anyway, that's why I have a sexual fantasy with you, Jonah. We would meet up in a hotel room at night. We would chat, you'd make me laugh. Then all of a sudden, you'd bring your friends [Leonardo] DiCaprio and Brad Pitt, and then you'd go away.

Afterward, Hill reportedly opted to cancel the rest of his press tour in France, and Fleury has since apologized for her comments. Per a translation from the Local, an English-language French publication:

"Jonah, the problem is that for 10 years I have lived with you through your films," she said. "In fact, Jonah, I really had the impression that I knew you, so last Friday I thought I was just messing around with a friend, but the reality is that we are not friends."

Watch the interaction between Hill and Fleury below.