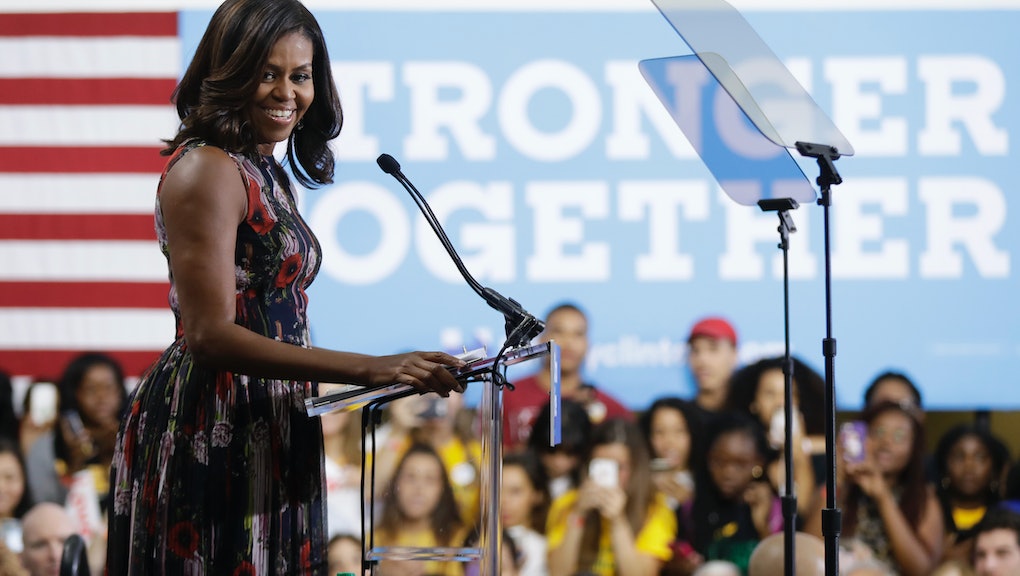 First lady Michelle Obama did not mince words when she called out Donald Trump during a speech Friday supporting Hillary Clinton at George Mason University in Fairfax, Virginia.

Trump, a noted racist, came to national political prominence in 2011 by spreading widely circulated rumors that President Barack Obama was not born in the United States.

After several years spreading this racist "birther" conspiracy theory, Trump announced Friday he believes Obama was born in the United States. (Because his opinion matters, apparently.)

On Friday, Michelle Obama had a remarkably poised clapback to the GOP presidential nominee's track record on the issue — and she didn't even use his name:

"There were those who question and continue to question for the past eight years, up through this very day, whether my husband was even born in this country," Obama said. "Well, during this time in office, I think Barack has answered those questions with the example he set by going high when they go low."

Obama continued raining blows on Trump — all with great class.

"At the end of the day, as I have said before, the presidency does not change who you are," Obama said to a room full of cheers. "It reveals who you are, and the same thing is true of a presidential campaign."

Obama went on to caution about the dangers of a candidate with a track record for vagueness on policy and a penchant for insults.

"If a candidate traffics in prejudice, fears and lies on the trail, if a candidate has no clear plans to implement their goals, if they disrespect their fellow citizens, including folks who made extraordinary sacrifices for our country — let me tell you, that is who they are," she said. "That's the kind of president they will be. Trust me, a candidate is not going to suddenly change once they get into office."

Obama then gave an eerie warning about the perils of sending the wrong person to the Oval Office.

"The minute that individual takes that oath, they are under the hottest, harshest light there is and there is no way to hide who they really are," Obama said. "And at that point, it is too late."

"They are the leader of the world's largest economy," Obama said. "The commander in chief of the most powerful military force on Earth. With every word they utter, they can start wars, crash markets, change the course of this planet."

She then eviscerated Trump for his immaturity and bigoted rhetoric by referencing his past hosting The Apprentice.

"Being president is not anything like reality TV," Obama said. "It is not about sending insulting tweets or making fiery speeches. It is about whether or not the candidate can handle the awesome responsibility of leading this country."

Obama closed her speech by offering a sliver of hope, stating Clinton, the Democratic presidential candidate, is by far the most qualified for the White House.

Which is fine, but let's get to the real question: When can we just anoint Michelle Obama the Queen of the United States of America?