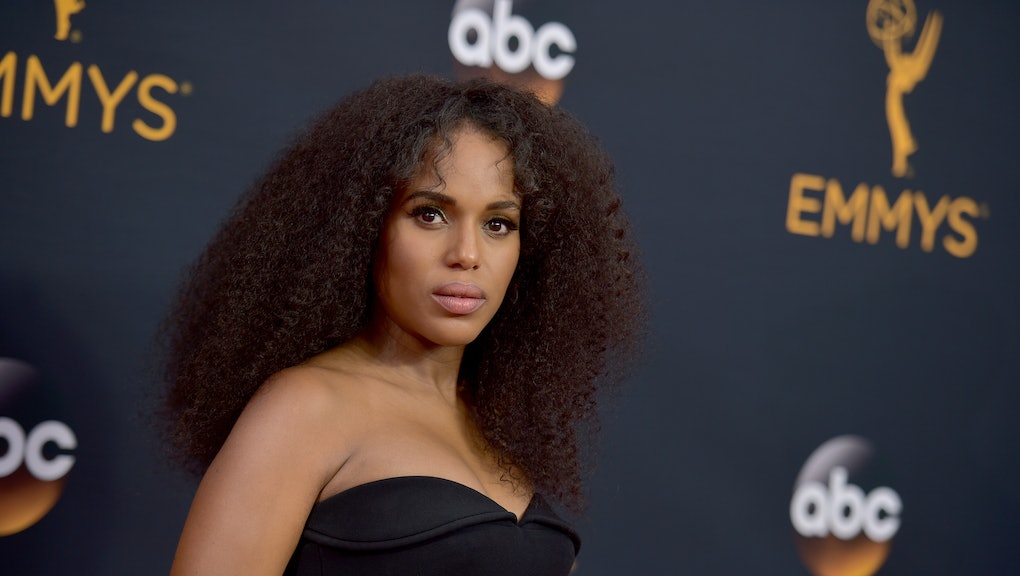 A very pregnant Kerry Washington set the red carpet on fire Sunday at the 68th annual Emmy Awards not for what she was wearing (that, after all was expectedly stunning) but with her decision to rock her natural hair.

The two-time Emmy nominee was on hand to potentially snag her first statuette for HBO's Confirmation, for which Washington earned a nomination for outstanding lead actress in a limited series or movie.

Washington's hair Sunday might not appear at first glance to be such a big deal, but with daytime talk shows routinely turning natural hair makeovers into disasters and girls being called to the principal's office because their hair is deemed "too puffy" or threatened with expulsion because of their natural hair, seeing the style proudly displayed on a red carpet is important.

The conversation surrounding the style crescendoed so much that a recently launched magazine, CRWN, was created entirely devoted to celebrating women's natural hair. "Just from my personal experience growing up, you go purchase your products in an ethnic aisle," Lindsey Day, CRWN's editor-in-chief, said in previous interview with Mic. "You flip through a magazine and don't see yourself. All these micro-agressions against your existence can make you feel like you don't matter as much

Look to Twitter for proof that Washington's gorgeous mane did not go unnoticed.

Here's hoping to seeing more natural hair, not just on red carpets, but everywhere. It is after all... natural.