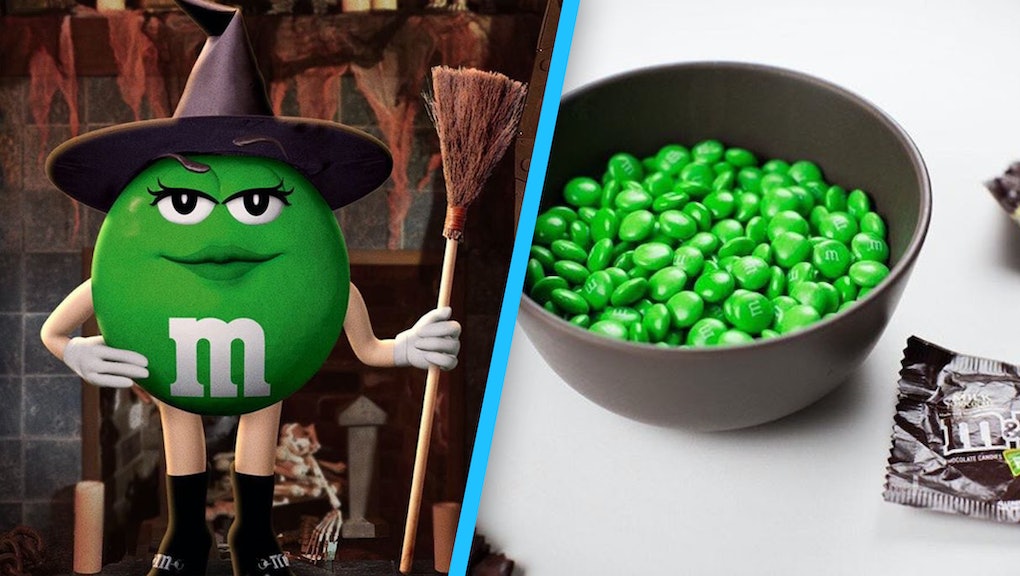 Why is the green M&M so seductive? A look back at the chocolate's sexist history.

It's 2016 — Hillary Clinton became the first woman nominated by a major political party; U.S. Olympic swimmer Katie Ledecky was so fast some of her male training partners had to leave the pool to protect their egos; Elena Ferrente wrote an internationally bestselling series; hell, Beyoncé broke the internet with Lemonade.

And yet, despite the varied accomplishments of modern women, we still have some awfully sexist M&M's characters.

The anthropomorphic M&M characters, known as spokescandies, are a merry band of chocolates. But take a gander at the green M&M. She's one sexy piece of chocolate. "Ms. Green," as she's called, has seductive, pouty lips, luscious eyelashes and she works a pair of heels.

It all started when sales started flatlining around 1995. To drum up more business, Mars Candy hired marketing agency BBDO to transform M&M's into a more iconic brand, Business Insider reported. BBDO dreamed up a cast of four characters that each had a certain personality. The red M&M was the sarcastic one, the yellow was the simple one, the blue was cool one and the green was the "sexy" one.

At the time, the green M&M was the token female — and the only seductive spokescandy. Just look at her putting her hand on her hip and blowing a kiss in the ad below. Total. Vixen.

Ads depict the Ms. Green as a genuine sexpot. "[It's] so grotesquely obvious and that makes it funny," Jennifer Berg, professor at the Food Studies program at NYU said in a phone interview. "They know that they're doing it; it's subversive. They're making fun of themselves and making fun of their product at the same time."

Her signature go-go boots were part of the strategy to make her extra foxy, Susan Credle, BBDO's creative director at the time, told Business Insider. "We gave her these go-go boots because we couldn't figure out how to give her ankles," Credle said, explaining that early sketches without the boots had "tree trunk" legs.

Yup, as bizarre as it sounds, BBDO had to give Ms. Green a pair of shoes that covered her ankles just so she could aline with female beauty standards. Because, heaven forbid a woman's ankles are anything but dainty? May we remind you Ms. Green came on the scene in the 1990's, not the 1890's, when women wore long skirts to cover their ankles.

Ms. Green's character is a cheeky nod to the urban myth the green M&M's are an aphrodisiac — a rumor that began in the 1970s when students fed green M&M's to their crushes, the website Snopes reported. (Spoiler alert: science says chocolate has little effect on desire, according to the New York Times.)

It took Mars 17 years to add another female M&M to the squad. In 2012, the company concocted a bossy, smart female character named "Ms. Brown."

"Ms. Brown is an intelligent woman with a sharp wit who finally decided to reveal herself after working for decades behind the scenes as 'chief chocolate officer'," is how the New York Times described the newest spokescandy.

Ms. Brown "seemed like a natural extension of the M&M'S spokescandy family given they're all loosely based on classic comedic character archetypes, as well as the fact Ms. Green had been the sole female voice for several years," a Mars Chocolate North America spokesperson said in an email.

A woman who got sh*t done "behind the scenes"? The fictional portrayal reinforces a sad reality: research shows women typically don't get credit when they work with men, New York Mag reported. Plus, women work more than their male peers. Globally, young women who enter the job market now will likely work roughly four years more than young men, over their lifetimes, according to a recent report from the NGO Action Aid, plus women put more work in at home. Basically, women are always hustling, whether they get recognition or not.

Take a look at Ms. Brown helping Yellow with his taxes. She's a caretaker, somewhat of a know-it-all who's frequently helping out the other spokescandies.

Red, Yellow, Orange and Blue "represent average or deprecating male characteristics," Berg noted. "All of the 'men' are benign sanitized versions of male traits while the 'women' are hyper-characterizations of female stereotypes." And, of course, the women have "Ms." attached to their names. Hmmm.

"Sexism is a two-way street," Berg said. And the lady candies still get the short end of the stick.

"When [sexism] is deprecating men, it actually elevates them," Berg explained, giving the example of the man who can't make dinner. "It's not about you're pathetic and you don't know how to cook. It's like, oh you're so cute, you order Seamless. It's endearing," she said. "When it's at the expense of a woman, it doesn't always have that effect."

Everyone wants to eat our M&M'S spokescandies. That said, each spokescandy has their own unique personality that's loosely based on classic comedic character archetypes that guide how we share their stories with the world.

By "everyone wants to eat our M&M's spokescandies," the Mars Candy spokesperson alludes to ads that depict human men and women lusting after the anthromorphic M&M's. Ms. Brown and Ms. Green may be sexy, but all the spokescandies are objects of desire humans drool over.

Sexualizing chocolate consumption is routine — plenty of chocolate brands (ahem, Dove, Godiva and Lindt) advertise products by implying that women have a biological need for chocolate or by showing women who eat chocolate are "on the cusp of orgasm," Berg said.

Even if they provide cheap laughs, the "classic" comedic character archetypes for the spokescandies feel stale. In this case, classic translates to antiquated and trite.

However, M&M's personalities that reflect the spectrum of eccentricities modern people have? That'd be a sweet change.