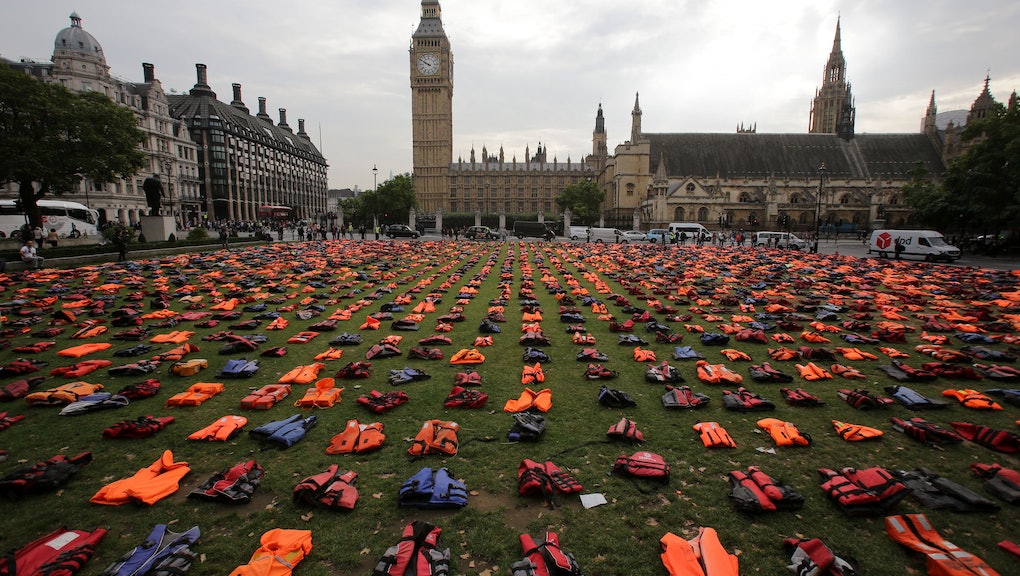 The "life jacket graveyard," as organizers refer to it, is actually meant as a powerful reminder of the thousands of refugees who have drowned while trying to make the treacherous journey to safety in Europe as well as a tool for raising awareness about the refugees who continue to risk their lives to get to safety — and the display has intentionally been placed right outside the offices of British lawmakers.

The life jacket graveyard was organized by U.K.-based Snappin' Turtle Productions, in partnership with the London mayor's office and several refugee organizations, and is meant to call attention to a United Nations summit about refugees, which is meeting Monday in New York.

According to the statement, which cited information from the United Nations High Commissioner for Refugees — the U.N.'s refugee organization — an estimated 6,940 people who were trying to get to safety in Europe drowned or went missing between January 2015 and August 2016.

The volunteers who laid out all the life jackets in Parliament Square on Monday showed up at 5 a.m. local time to set them up.

In the statement from Snappin' Turtle, Ahmad al-Rashid — a 26-year-old refugee who fled his home in Aleppo, Syria — talked about the memories brought up by seeing the life jackets out on the lawn. "The last time I saw these life jackets I was crossing the sea to Greece," he said.

"It makes me think about the risks I had to take," he said. "I know of friends and people who lost their lives in the sea after the life jackets betrayed them. Smugglers were selling them fake life jackets. The majority of people who fled their homes didn't have a choice but to take the horrendous journey to safety. Some of them were lucky and they managed to get to safety, others were not able to. Today we stand here with these life jackets to bring to life their memories and experiences."

Snappin' Turtle directors Michael Traboulsi and Ben Taylor explained the reason they helped organize the life jacket display. "Snappin' Turtle has followed the crisis like so many people, and it's something that won't leave us," they said. "This is a story that must be kept in the headlines, which is why we reached out to the charities with the idea of creating a display of authentic life jackets on the day of the U.N. summit. Each jacket tells its own story, whether it's an adult or a child or a whole family."

The display will stay up until Monday night, when volunteers will take it apart.