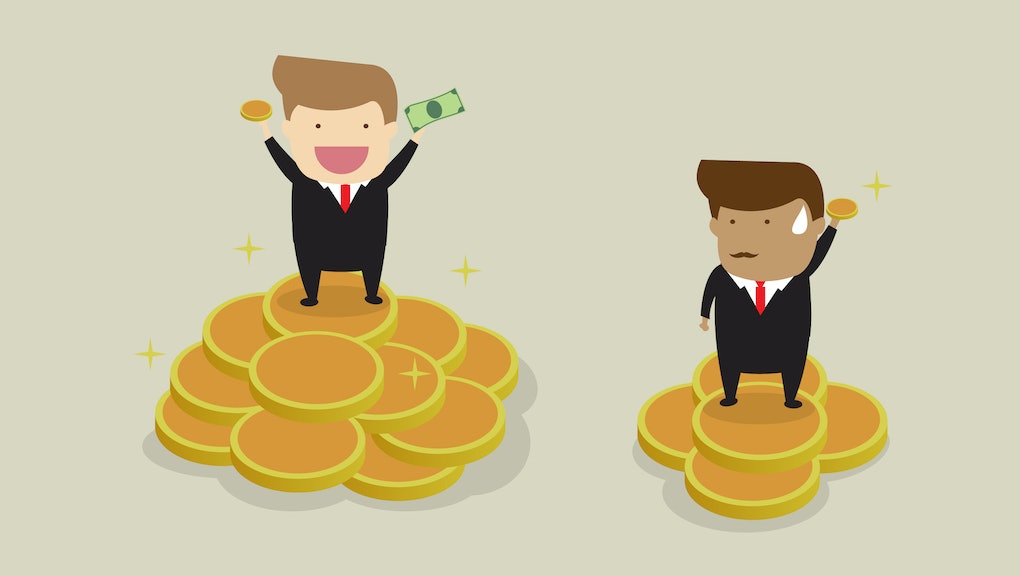 Instead of getting fairer since the 1970s, the difference in pay for white versus African American workers has grown wider, according to a report by the Economic Policy Institute published Tuesday.

That's right: The wage gap between blacks and whites in the United States is higher than it was nearly 40 years ago.

And it's even worse for black women, who earn 65.8 cents to a white man's dollar. Meanwhile, white women earn 11.7% more than black women.

Twitter users were not quiet about the report's findings:

This newly published data on the wage gap doesn't even include the most damning numbers around: A Pew Research Center report found that in 2015, on average, a black man earned around $15 an hour, while a white man earned $21 — aka 71 cents on the dollar.

In fact, other data suggest that college degrees — while ever more crucial for white workers — have had diminishing returns for black Americans.

The Federal Reserve Bank of St. Louis found that between 1992 and 2013, the median real net worth of white people with a college education increased by more than 86%.

For black people? It actually shrank by 55%.

One underlying factor could be that the difference in pay between black and white college graduates is biggest in top-earning fields, such as pharmaceutical sciences.

"Race is not a skill or characteristic that should have any market value as it relates to your wages, but it does," Valerie Wilson, co-author of the report, told CNN. Wilson is also the director of EPI's Race, Ethnicity and the Economy program.

Even census data shows the problem has been a consistent one: As median household incomes increased overall by more than 5% from 2014 to 2015, income inequality by race and gender remained pretty much unchanged.

The EPI study attributed the current black-white wage gap to "discrimination (or racial differences in skills or worker characteristics that are unobserved or unmeasured in the data)."