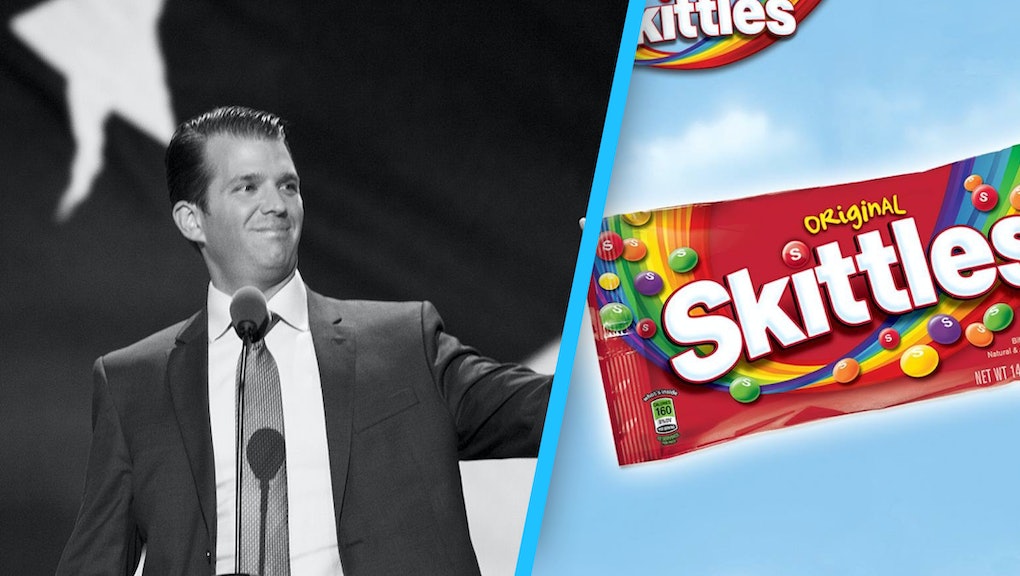 Skittles encourages people to taste the rainbow, not to be racists.

Early on Tuesday, the candy company offered up a classy response to Donald Trump Jr.'s insulting photo that compared Syrian refugees to a bowl of poisoned Skittles.

Trump Jr., the the son of GOP presidential nominee Donald Trump, tweeted out an image the same evening that read: "If I had a bowl of Skittles and I told you just three would kill you. Would you take a handful? That's our Syrian refugee problem."

The graphic is stamped with the official Trump/Pence logo, as Mic previously reported, which means that it was approved by the Trump campaign and was probably not just created by a Trump supporter. The graphic is also grammatically incorrect, which is for another story.

"Skittles are candy; refugees are people," the official Mars, Incorporated Twitter said. "It's an inappropriate analogy. We respectfully refrain from further comment, as that would be misinterpreted as marketing." Mic has reached out to Mars for more information.

Trump Jr.'s denigrating tweet has not been deleted yet, even after Mars Candy pointed out just how flawed it is to compare humans who are fleeing a civil war to candy, an inanimate object. Not only is the parallel dehumanizing, there is no evidence to support that three Syrian refugees out of every "bowl" of Syrian refugees "would kill" people. This logic could technically be applied people in general, as singer John Legend pointed out on Twitter.

Mic has reached out to the Trump campaign for comment.

Trump Jr. isn't the first to equate a group of people to food — a trend that has no place in considerate language.  Food writing has a history of using female archetypes when describing dishes, Slate pointed out in 2013. This only "reinforce[s] the objectification of women," however.

Comparing a group of people to a food can also be fetishizing, blog Writing With Color noted. Likening a person's skin to things like chocolate or coffee is "connected to some sensual desire," the blog continued. That makes it as if all people of color are just food for others to consume.

People are not edible, unless you live in the world of Soylent Green. And if that is the case, then the world has a much bigger issue on its hands.