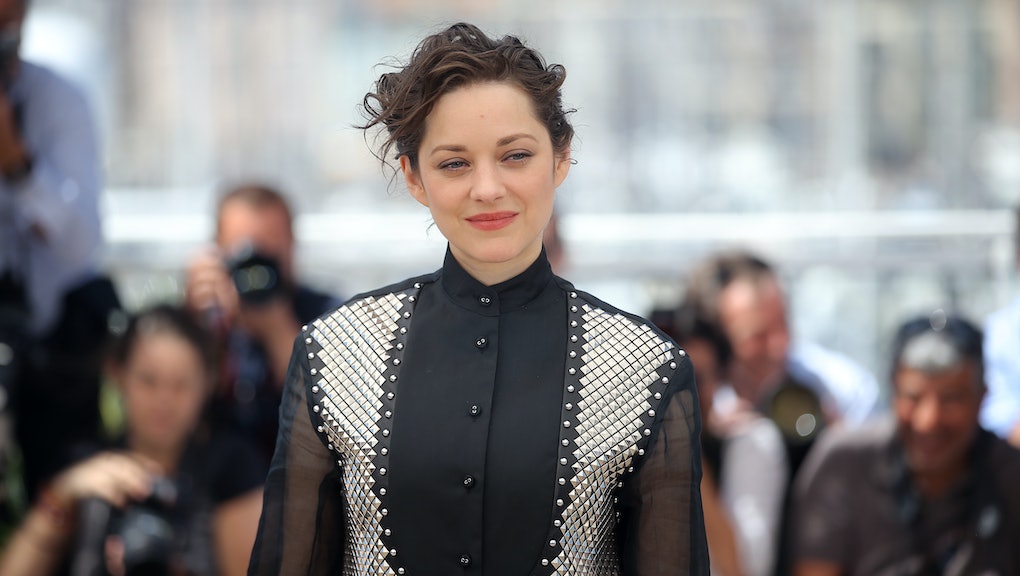 Here's why blaming Marion Cotillard for breaking up Brangelina is wrong

If you believe Page Six, Brad Pitt and Angelina Jolie's divorce is all about Marion Cotillard.

The tabloid reported Jolie hired a private eye to tail her husband, leading to the discovery that he was having an affair with the French actress. Pitt and Cotillard are co-stars in November's Allied.

1. There is nothing but anonymous information confirming the Cotillard rumor, and in fact there are already multiple reports refuting the story entirely.

2. Even though the story is seemingly just gossip, it's easy to see why people are getting wrapped up in it: It's the kind of delicious twist of fate that attracts fascination. There's nothing intrinsically wrong in being interested in the rumor.

3. But most importantly: There is indeed something wrong with blaming Cotillard for the split. Even if the gossip is 100% true, the end of Brangelina is absolutely not her fault.

Already people are calling Cotillard a "homewrecker" — the kind of term that we really should have left in the 20th century, but here we are. The idea is that Cotillard should be held responsible for the end of Pitt and Jolie's marriage.

To blame Cotillard requires such leaps in thinking that it actually defies logic. For it to be her fault, it would mean that not only is the rumor true, but Pitt somehow isn't culpable for his own actions. You'd have to, with a straight face, make the argument that Pitt — who, remember, left Aniston after falling in love with another woman — isn't to blame for an alleged affair.

The inclination to blame Cotillard — or even Jolie, for marrying a man who left his wife for her — instead of Pitt speaks to deep-seated problems. Instead of questioning his behavior, we have Twitter users saying they "can't blame" Pitt for allegedly sleeping with Cotillard. That response is positively drenched in sexism. It's basically saying, "Hey, who could fault a guy for sleeping with a gorgeous woman? We'd do the same!"

Meanwhile, just for being mentioned in a questionable gossip report, Cotillard gets called a homewrecker. That's the difference in how we treat men and women: Allegations of infidelity earn Pitt pats on the back, while Cotillard is cast as suspicious.

Brangelina ending is about Brangelina. There are two people in that marriage, and only those two know why they've chosen to separate. Reading tabloid reports is not nearly enough on which to base judgments. Unfortunately for Cotillard, she's become cannon fodder in this divorce — an unfair position for a blameless third party.