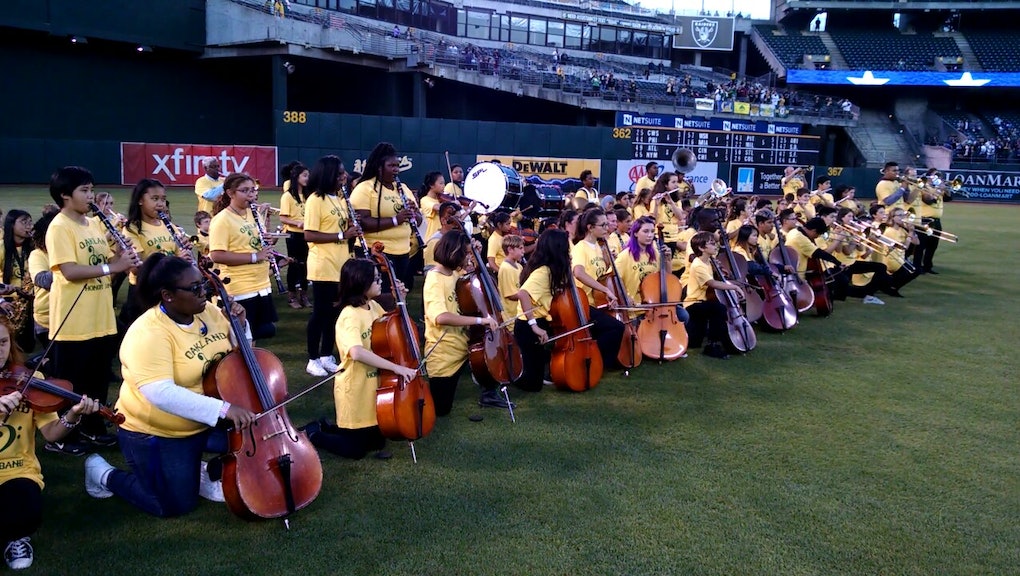 An Oakland middle and high school band knelt at the A's game, and the crowd loved it

It seems like San Francisco 49ers quarterback Colin Kaepernick's choice to peacefully protest police brutality by taking a knee during the national anthem is having a powerful effect on young people: During Tuesday night's Oakland A's game, almost all of the middle and high schoolers who opened with the national anthem knelt on the field as "The Star-Spangled Banner" drew to a close.

And their protest won them "enthusiastic applause" from the audience.

A photo uploaded to Facebook by the Oakland Unified School District on Tuesday showed the teenage musicians kneeling, instruments in hand, as they played the national anthem.

According to a description shared along with the photo, "most of the 155 middle and high school students took a knee in protest against police brutality and unfair treatment of people of color in America. The crowd responded with enthusiastic applause." The school district also shared a video on its official Instagram account.

These middle and high schoolers in Oakland are relatively close to where Kaepernick is holding his own peaceful protest during the national anthem, but Kaepernick has been inspiring kids across the country, not just in his own state.

High school athletes in Minnesota, Massachusetts, Nebraska and New Jersey have joined Kaepernick in protesting police brutality and racial inequality by declining to stand for the national anthem, sometimes risking disciplinary action to do so.

But it seems that the students in the Oakland Unified School District honors band protested with the full blessing of the district and many in the community. As one commenter wrote on the photo shared on the district's Facebook page, "Our youth should be applauded for their self-awareness, standing against social, racial and economic injustice. Progress and evolution are in their hands. Kudos to the musicians who knelt while playing the song."