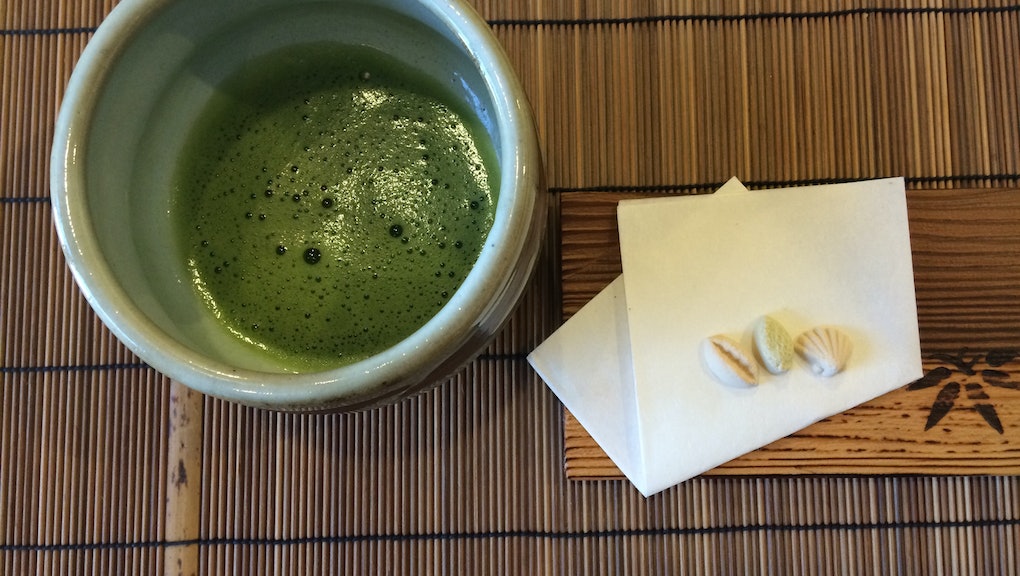 Sure, matcha could have some health benefits, but bathing in it won't make you superhuman

Got green? America sure does. Matcha is the current darling of the health world in the U.S. Brilliant green matcha lattes, matcha desserts and more are flooding Pinterest and health blogs, while retailers like Starbucks are capitalizing on the trend.

Heck, people are putting the green stuff in bathwater these days. Yes, for real.

Drinking matcha may give you a caffeine buzz, but — buzzkill alert — the health benefits of the finely milled powder are as murky as the tea itself.

Matcha differs from regular tea because it isn't steeped. To prepare a matcha latte, the powdered tea mush be vigorously whisked with hot water, tea company Teavana noted. These days, many cafes serve matcha lattes with frothed milk that masks the bitterness of the matcha.

Despite its sudden trendiness, the green drink is thousands of years old. During the Tang Dynasty in China, tea leaves were steamed and molded into bricks that were easy to transport and trade, matcha retailer Chalait noted on its website, explaining that the method of whipping powdered tea with hot water in a bowl became popular in the Song Dynasty. Matcha later became an important ingredient in Japanese tea ceremonies, Eater noted.

Matcha powder is like green tea on steroids. Matcha aficionados claim that the substance delivers a megadose of compounds known as catechins. Most notably, EGCG, a powerful antioxidant, is a catechin found in the tea. Many believe EGCG reduces damage to cells and can potentially prevent cancer.

Science says ... pump the brakes on the cancer proclamations. Chung S. Yang, a professor of chemical biology at Rutgers University, told the Wall Street Journal that research on green tea and cancer prevention has produced mixed results, leading him to believe there's only a weak effect. Yang co-authored a study on tea and its potential to prevent chronic diseases.

Even though matcha powders may have exponentially more good-for-you catechins compared to green tea, Yang noted that the short brewing time for the tea may translate to only a few antioxidants in your teacup.

But an analysis from Consumer Lab, an organization that conducts independent product testing, revealed that several studies demonstrate the power of the compounds in green tea. Green tea consumption (at five or more cups per day) was associated with lower risk of death and cardiovascular disease. Fourteen separate studies also confirmed that green tea is linked to a decrease in cholesterol. Not too shabby — though a daily five cups = a lot of bathroom trips, no?

Also, wannabe parents, take note: Drinking too much of the green stuff could potentially affect your ability to have kids, Mic previously reported. A study in the Journal of Functional foods found that the polyphenols in green tea spelled bad news for the reproductive organs in fruit flies, which share many of the same disease genes as humans.

So how bout that matcha bath? Can a green tub really make your skin glow? Actually, you're pretty much just soaking in very expensive water. No scientific studies have confirmed the benefits of cosmetic products that contain matcha, Nylon reported, noting that the tea has become a trendy ingredient in the beauty industry. While some dermatologists believe matcha beauty products can heal sun damage, acne and scarring, researchers have yet to investigate these claims.

If you're looking to sip your way to longevity, moderate amounts of matcha has demonstrated health benefits. But if you're slathering it on your face or dipping in a bath full of the stuff, you're not actually ingesting those helpful catechins.

Bottom line: You're better off putting your money where your mouth is, by literally consuming matcha instead of slathering matcha products on your bod.

This article was originally published on Sep. 29, 2016