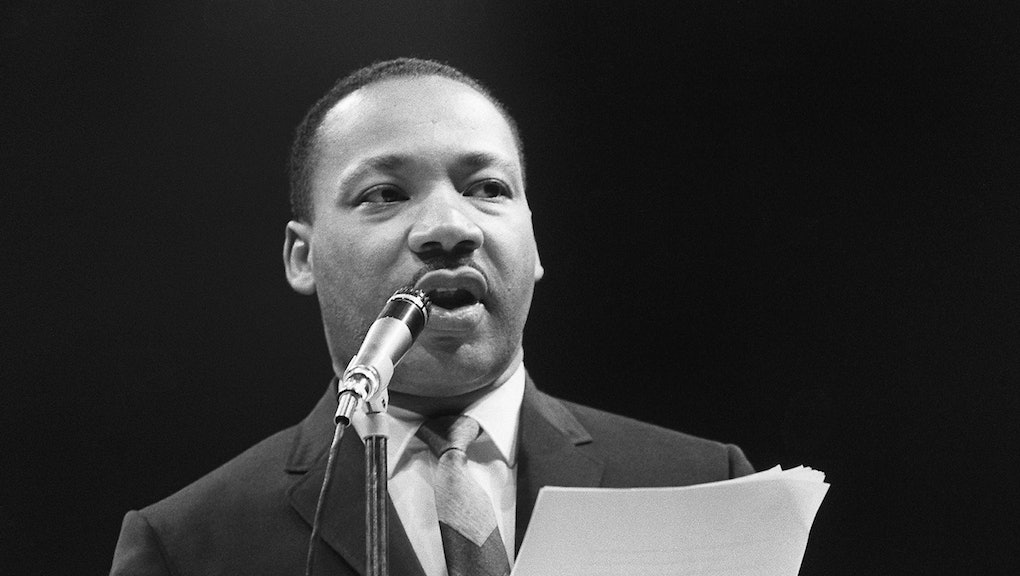 People are using MLK Jr. to silence black protesters — here's what they're forgetting

On Tuesday night, protests erupted in Charlotte, North Carolina, following the police shooting of Keith Lamont Scott, a black man who authorities said had a firearm. Hundreds of protesters congregated in the streets calling for justice for Scott, who his sister maintained was unarmed.

According to USA Today, 12 officers were injured amid the protest, which shut down part of Interstate 85 Wednesday morning. Police responded with tear gas and tactical gear after they said "agitators" had joined protesters, damaging squad cars and vandalizing a nearby Walmart.

In the wake of the protests, a Twitter user named Cameron Westbrook made what he could only have seen as a good point, posting a photo of Martin Luther King Jr. and black protesters, to which he said, "Remember when fighting for change looked like this?"

Twitter users began by pointing out the obvious — that King was assassinated despite his civil disobedience, proving that even the most peaceful protesters, even those who march in suits and ties, are treated as dangers to society.

Another Twitter user reminded Westbrook of King's own stance on riots, which King called the "language of the unheard" in a 1966 address. Though King said he's a staunch advocate of nonviolent protest, he emphasized the importance of not being dismissive of riots.

"Riots don't develop out of thin air," said King. "Certain conditions continue to exist in our society that must be condemned as vigorously as we condemn riots."

There's a history, of course, of people misrepresenting King and what he stood for. In 2016, King remains best remembered for his "I Have a Dream" speech, where he expresses his oft-quoted hope that one day his children will no longer judged by the "color of their skin but by the content of their character."

Typically forgotten are King's less digestible truths about how capitalism was built on the "exploitation and suffering of slaves" and that "whites ... are not putting in a similar mass effort to reeducate themselves out of their racial ignorance."

But critics of the modern-day movement for black lives seem to suffer from historical amnesia when it comes to King's legacy and the measures others fighting for justice had to take to produce radical change.

Civil rights weren't achieved solely by King, who's been made into an exemplar for respectability politics, but are thanks to many activists like Rosa Parks and Malcolm X, whose message on police brutality would still be considered controversial today.

Aurin Squire explained in a 2015 piece for Talking Points Memo that black respectability politics maintain "that systemic oppression can be overcome if we're clean, mild, moderate, and economically successful enough." For black protesters, that means being quiet, peaceful and cooperative and hoping that those who have never listened before will hear their message.

Still, even those who silently protest — like football star Colin Kaepernick — are criticized for their demonstrations.

Kaepernick drew flack from all sides for sitting down for the national anthem at a 49ers game in August in protest of police brutality and racism in America. People didn't just disagree with the message behind Kaepernick's protest, but his form of protest altogether, with many calling him unpatriotic, disrespectful and ungrateful for the privilege of living in the United States.

"What should horrify Americans is not Kaepernick's choice to remain seated during the national anthem, but that ... we still need to call attention to the same racial inequities [that existed 50 years ago]," Kareem Abdul-Jabbar wrote in Washington Post op-ed. "Failure to fix this problem is what's really un-American here."

The same could be said of the recent protests following the shootings of black men over the last few years.

After the 2015 murder of Freddie Gray in Baltimore, Maryland, a black teenager told Time, "I know Freddie [Gray]'s family didn't want rioting ... and people don't want us destroying our community... but we don't want police killing us. If they won't stop, we do what we have to."