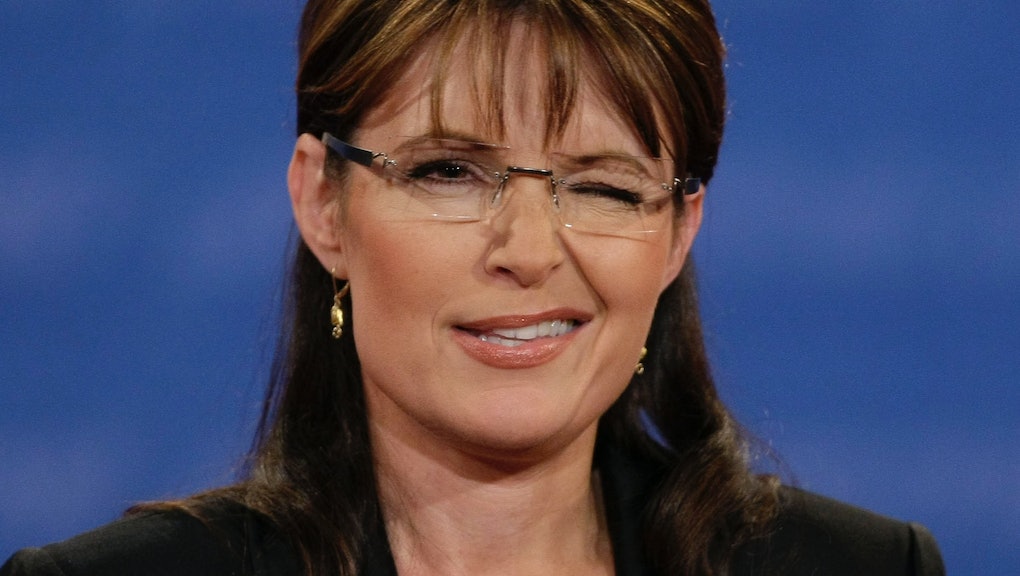 When Sarah Palin strode onto the stage to debate Joe Biden in 2008, the smart money said the Alaska governor was bound to end up looking, well, not too smart.

But Palin took on the shrewd gentleman from Delaware — and the "lamestream" media — with a strategy that had even those outside the ranks of "right-winging, bitter-clinging proud clingers" of guns and religion saying the GOP veep hopeful had skirted disaster.

Will Donald Trump end up taking a page from the Palin playbook when he faces Hillary Clinton next week? He just might.

Palin avoided flaming out in her matchup with Biden by not only matching his salt-of-the-earth charm, but through heeding advisers' instructions to intentionally change the subject and stick to canned talking points when faced with a challenging topic.

"I may not answer the questions the way that either the moderator or you want to hear, but I'm going talk straight to the American people," Palin said at one point, when Biden tried to call her out for dodging.

Trump's campaign-trail track record could make the Palin approach an appealing option when the GOP presidential nominee faces the former secretary of state in a series of three debates starting at Hofstra next week.

"It's a really good premise," James Morone, a political scientist at Brown University, said in an interview.

Morone said that both candidates "don't know much" about public policy, and that they faced one central challenge: "persuading the electorate that they are capable of holding this job."

At the time she debated Biden, Palin had already created the makings of one of the most famous Saturday Night Live spoofs in political history, thanks to a stumbling interview with Katie Couric in which Palin appeared stumped when asked about where she got her news.

As later described in the campaign post-mortem Game Change, the governor of the Last Frontier had major problems with debate prep — from a lack of basic knowledge of American history right down to repeatedly referring to her opponent as "O'Biden."

While Palin went on to challenge the book's depiction of her as clueless, there seems little question that her ultimate strategy went heavy on straight-to-camera "straight talk" and lighter on fine detail compared to Biden's strategy.

If Palin didn't outright win the debate, her strategy ostensibly allowed her to exceed expectations while preventing the more seasoned Biden from annihilating her before the clock ran out.

"It worked just fine. She did not embarrass herself," said Morone.

Trump will face a similar situation on Long Island when he squares off against Clinton, although the pressure will obviously be higher because it's a race for a new address at the White House, not Number One Observatory Circle.

The Manhattan businessman is lauded by his supporters (and himself) as an outside-the-Beltway straight talker, and panned by his critics as big on bluster and painfully short on specifics and facts.

But Trump's greatest risk in 2016 is somewhat different than Palin's was back in 2008.

"For Sarah Palin, the whole game was avoiding her obvious ignorance. For Trump, it's not avoiding his ignorance — it's avoiding him creating another firestorm by going off half-cocked on something," Morone said. "You don't want him sort of setting off all the independents once again and getting everyone throwing up their hands and saying, 'This is a guy we can't vote for.'"

To that end, the latest iteration of Team Trump, headed by longtime GOP strategist Kellyanne Conway, has fought to keep the candidate on the teleprompter and sought to rein in his penchant for freestyling.

But Trump got to where he is today by treading a path that's been anything but traditional.

That's why even if Trump's debate strategy does end up relying more on a blueprint calling for deliberate pivots in the face of "tricky" questioning versus last-minute cram sessions on world affairs, the plan could go awry.

"I think any attempts to corral or confine Trump are futile," conservative commentator S.E. Cupp said in an email.

"Even when given a script, he has difficulty sticking to it. During a debate he'll react in real time, with all the attitude his supporters have come to love," Cupp said. "If there are questions he doesn't know the answer to, he'll do what he always does — say 'We'll have to see' or 'We're going to look at that.'"

This is not to say Clinton doesn't face challenges of her own in the three-debate series: Trump is nothing if not unpredictable, and he's a proven bomb-thrower whose withering on-stage insults by turns tripped up and energized his primary foes.

Morone said even as Trump must appear presidential and prepared and avoid trafficking in "meanness and racism," Clinton needs to go beyond the distant wonkishness that's tripped up candidates from Mike Dukakis and Al Gore to John Kerry and even Barack Obama in previous cycles.

Bottom line, according to Morone, Clinton "has to come off as personable, nice, someone you can identify with — and [Trump] just has to not be a jerk."