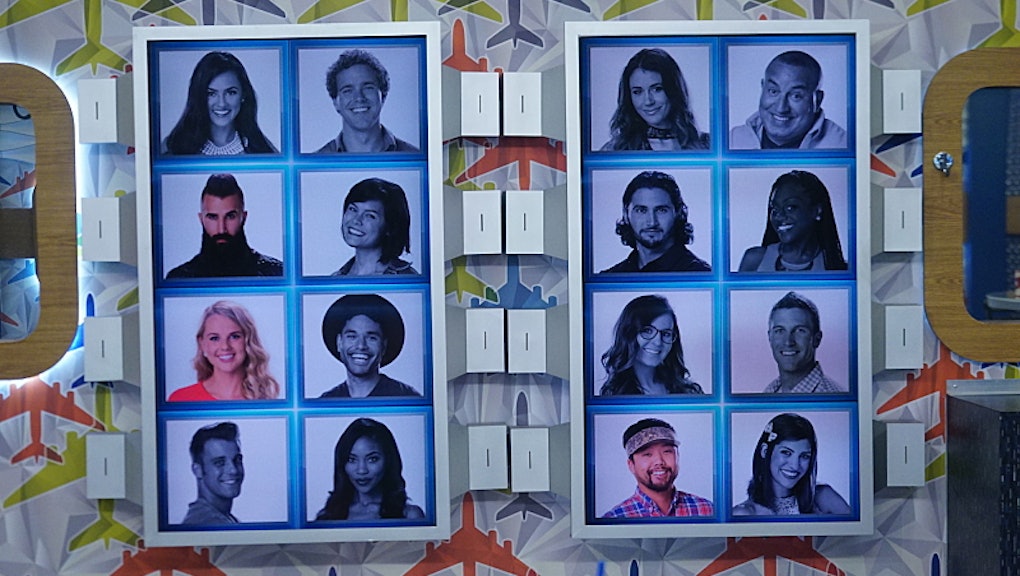 To close out the season, there's a three-part final Head of Household competition. The first round is an endurance competition in which James, Paul and Nicole are dressed as cats and must follow a red laser pointer around to different areas of the backyard, where they have to hang onto a wall.

Nicole was the first to fall off, followed almost immediately by James, making Paul the winner of round one.

Only Nicole and James compete in the second part of the competition, which is carnival-themed. They're shown descriptions of different houseguests, like "never a have-not." They have to determine the three houseguests that fit this description, run through a long maze of fences, put the three contestants' faces in a roller coaster car and push it down a hill.

They then have to push a button to take a photo of the roller coaster car and run back through the maze. The photo has to completely capture the car or it doesn't count. The first person to take three correct photos wins. Nicole finished significantly before James, so she gets to compete against Paul for Head of Household.

For the final competition, Paul and Nicole are presented with a series of quotes from their fellow houseguests and have to determine how each quote ends. Paul wins and is named the season's final Head of Household.

As the final Head of Household, Paul has to choose to evict either Nicole or James. He's made final two deals with both of them, but he evicts James on the grounds that he feels James stabbed him in the back.

After his eviction, James talks to host Julie Chen and tells her that he planned all along to play the way he did, staying under the radar and not winning competitions. James now joins the jury and has a hand in determining the season's winner.

The nine jury members must choose between the last two houseguests, and before they do that they get to interrogate Paul and Nicole. Though they have discussed their feelings and deliberated as a group, each jury member votes individually.

Natalie asks Paul why she should give him her vote when he didn't give her or other people respect. Paul says he was "just having fun."

Victor asks Nicole if she feels that she rode on people's coattails, and she says she was the brains behind a lot of the things that happened in the house.

After the jury asks questions, Paul and Nicole give short speeches and the jury members cast their votes.

If you're already missing the drama, don't fret. The next season of Big Brother is called Big Brother: Over the Top, and it starts on Sept. 28 at 10 p.m. Eastern on CBS's on-demand site CBS All Access.