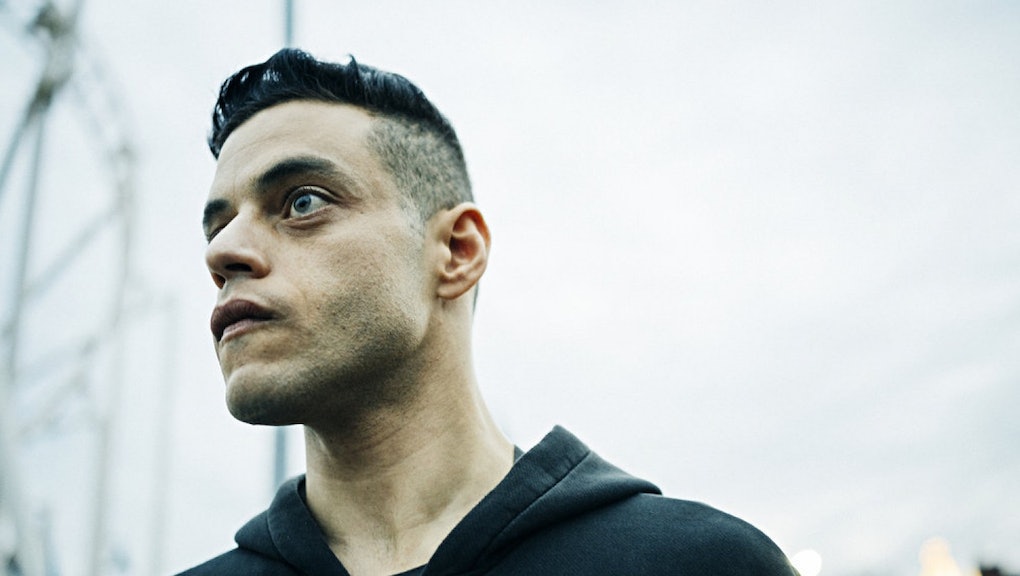 The ‘Mr. Robot’ finale was the show’s best use of manipulating the audience's paranoia

Say what you will about Mr. Robot, but the series is cognizant of the deep-seated paranoia it gives its viewers. In just two years — and really, from the onset of the first season — we've been led to question reality, mostly through the lens of the show's unreliable narrator, Elliot. (If you initially weren't sure whether to trust him, you certainly knew you couldn't after finding out Mr. Robot was a figment of his imagination.)

The best shows can create this type of sensation early — think about how non-book readers watching Game of Thrones soon came to the realization that nobody on that show is safe. That started back in season one for the HBO series, when it killed its lead protagonist, Ned Stark. Then, when you thought Game of Thrones couldn't one-up itself, the brutal Red Wedding happened.

Mr. Robot's season two finale, then, was a gut check for the audience: A test for anyone who thought they'd figured out at least some parts of the opaque narrative that creator Sam Esmail has pulled together. But on several occasions, Mr. Robot pulled the rug from under us — even if a long-awaited reveal turned out to be more mundane than expected.

Here's where the season finale manipulated the audience's increasing paranoia, which, ironically, makes us more suspicious ahead of season three.

So, turns out Tyrell Wellick was real.

When Tyrell Wellick finally returned in season two's penultimate episode, some viewers suspected that he became another figment of Elliot's imagination. After all, the last we see of him, Elliot's reaching for a gun in a popcorn machine, and he wakes up three days later in Tyrell's car, completely unaware of what's happened. For what it's worth: Mr. Robot also told Elliot that he killed Tyrell earlier this season.

Elliot was wisely suspicious of Tyrell's existence from the get-go, insofar as harassing a cab driver about whether he sees two people in his car, to which we never get an answer. Therefore, when Tyrell is ready to begin stage two of the Dark Army's plan — basically, blowing up Evil Corp's paper records — Elliot seemingly calls his own bluff, noting that Tyrell isn't real and won't be able to stop Elliot from canceling the attack.

Even as Tyrell points a gun at him, Elliot's unfazed — it harps back to Mr. Robot symbolically shooting him in jail when they had internal conflict, since they're one and the same he can't actually be harmed.

"I'm the only one that exists," Elliot says confidently to Tyrell and Mr. Robot. "It's time to finally take back control."

But then a shot goes off, and Elliot's bleeding on the floor. As he looks up at Tyrell and Mr. Robot, we see Mr. Robot beginning to flicker in and out of the picture. Tyrell, meanwhile, is still there: He's real.

It's the last we see of Elliot, but he's not dead — even Mr. Robot couldn't pull off killing its main character. However, it's a painful moment (literally and figuratively) for Elliot, who firmly believes he's going to be in control of his own destiny, in spite of Mr. Robot's anarchic intentions for society.

We know the source of Joanna Wellick's cryptic messages and phone calls.

An extension of the theory that Tyrell was dead and another figment of Elliot's imagination explained the cryptic messages and phone calls Joanna Wellick ostensibly received from her missing husband — it would be Elliot's Tyrell Wellick persona, or something along those lines. But Joanna, with the help of a previous hack from Elliot, tracks down the location of the phone calls, and we have our answer.

Turns out it's Evil Corp's CTO Scott Knowles, whose wife, Sharon, was murdered by Tyrell in season one. Scott explained to Joanna that Sharon was pregnant at the time she was killed; the news coming on the same day as his promotion to CTO. Joanna responds by brutally insulting Scott, after which he proceeds to nearly choke and beat her to death.

Her trump card from the entire situation, it seems, was to point the blame at Scott for Sharon's death. Joanna's caring boyfriend is revealed to be one of the bartenders at the Evil Corp party where she was murdered. She wants him to conjure up a fake story about Scott's whereabouts to pin the blame on him for Sharon's death.

It explains why Joanna had such a bland, out-of-the-blue boyfriend in season two: She was using him this entire time as leverage. But it pulls her story even further away from her now-alive husband and Elliot, and it's unclear how she'll connect to the overarching narrative going forward.

The FBI knows more than we thought — but Romero's death was an accident.

The crux of FBI agent Dom's compelling nature seemed to be that she was a small fish in a really big pond trying to take down the Dark Army and fsociety; the proof coming in the form of multiple shootouts and never-ending dead ends. But while she's interrogating Darlene — who survived the last shootout, but sadly, Cisco was killed — she lays out the full picture. The FBI knows a lot more about fsociety, including its ringleader, Elliot.

Darlene's own paranoia about the Dark Army is flipped on its head, too. Romero's death — which Darlene suspected was the Dark Army cutting loose ends with fsociety — was actually just a freak accident in Romero's neighborhood, as Dom explains. He caught a stray bullet.

Darlene, ironically, was losing her grip and patience at a group that wasn't explicitly after fsociety, while ignoring the tangible threat that's ready to consume them all. Like Dom explains, the FBI is a python, patiently waiting to go in for the kill, which we imagine should come in season three.

Trenton and Mobley are alive, but Leon's tracked them down.

An (understandable) extension of Darlene's paranoia came when the other surviving members of fsociety, Trenton and Mobley, mysteriously disappeared. The inclination here was that the Dark Army got them — or even the FBI — as stage two unfolded.

However, Trenton and Mobley are alive: They left New York and are working at a Fry's Electronics store in the middle of nowhere. But as Mobley and Trenton are discussing a way in which they can undo fsociety's hack on Evil Corp, they are approached by Elliot's former prison buddy, Leon.

Considering Leon's true intentions as a Dark Army lackey are revealed in prison — and this happens as he viciously stabs several inmates who attempt to rape Elliot — his appearance doesn't bode well for them. (Unless he's just asking about where he can purchase Seinfeld DVDs.) But we're left with Leon approaching the duo, so their fate will linger in the audience's minds until next season.

That season two ends with viewers questioning another encounter speaks to the ever-paranoid nature of Mr. Robot. Viewers aren't going to be getting the full picture from Esmail, but we should know that by now (control is an illusion, after all). But that's part of the magic of Mr. Robot: We're constantly being teased and tested to figure this show out.

Chances are, if you enjoyed the psychological whirlwind of season two, you'll be along for the ride in 2017.