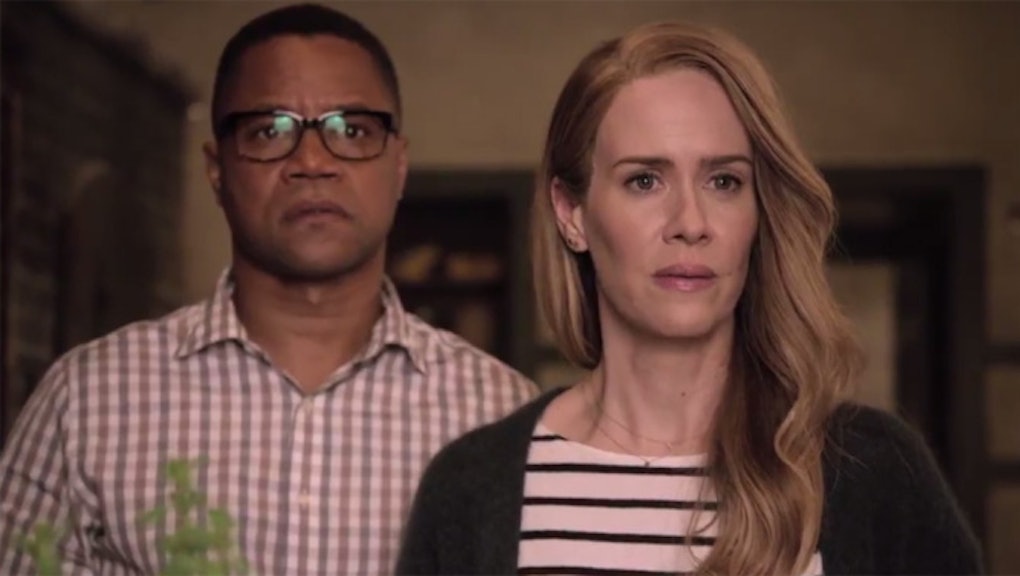 In yet another wild episode, season 6 of American Horror Story is proving to be one of the scariest yet. "Chapter 2" provided viewers with the disturbing backstory of Shelby and Matt's new home. We're only two episodes in and the couple is ready to move out.

Picking up from last week's episode, Shelby finds herself in the midst of a bizarre satanic ritual after searching for the women she hit with her car. Stranded in the middle of the woods, Shelby looks on in horror as Kathy Bates, along with her cult, performs what appears to be a human sacrifice. A man wearing a pig's head gets burned alive as a punishment for theft.

If you were still opening your eyes by this point, you might have noticed that Lady Gaga made a brief appearance.

Bates' character spots Shelby, who makes a run for it, but she doesn't get very far before passing out in the middle of the road. The next day, she wakes up in the hospital and the police prove to be as useless as ever. They tell her that they didn't find any evidence of human sacrifice in the woods the previous night, but Shelby has had enough this time.

Matt finally wants to pack his bags and leave, but Shelby wants to stay and fight. She is convinced that the bonfire gone wrong was another attempt by the creepy locals to drive them out of their home.

Later that night, Shelby and Matt are awoken by strange pig squeals outside. Once again, Shelby makes the unwise decision to grab a baseball bat and investigate the situation.

Matt follows her, but they become separated while scouring the woods. While frantically searching for her, he hears her screaming in the distance. When he finally finds her, Shelby is standing in front of a scarecrow-like structure that looks like it belongs in The Blair Witch Project. It is set on fire and adorned with a slaughtered pig's head on top, bloody pieces of meat dangling from its branches.

As all of this is going on, Matt's sister Lee attempts to reconnect with her daughter Flora. Although Lee is a compelling character, her parenting skills seem somewhat questionable. I mean, who would willingly bring their daughter to a house that seems to either be under attack by angry hillbillies or haunted by ghosts?

Either way, Lee is intent on bonding with her daughter. But when Lee's ex-husband Mason comes to pick up his daughter, he comes to a disturbing realization. They find her hiding in a closet, but she isn't playing hide-and-seek like they suspected. Instead, Flora says she was talking to her new friend Priscilla. Flora tells her parents that she was going to give her doll to Priscilla and when Lee asks why, she says, "So she wouldn't kill us. She's gonna kill us all and save me for last."

Finally, Mason demonstrates the first example of good judgment thus far this season and gets Flora the hell out of that house. He vows to never bring her there again. Lee watches as her daughter is driven away into the distance.

Later, Matt thinks he is dreaming when he sees two nurses brutally murder an old woman in his living room. Consumed with fear and doubt, Matt and Shelby begin to investigate the disturbing history of the home that they poured their life savings into. After stumbling upon a video tape, the truth comes to light. A professor, played by American Horror Story regular Denis O'Hare, narrates his experiences in the home during the '80s.

Dr. Elias Cunningham reveals that a murderous pair of sisters, Miranda and Bridget Jane, started an assisted living facility in the residence. They supposedly welcomed elderly people into the home where they were taken care of but eventually killed in a series of grisly ritualistic murders.

The motivation of the killings is perhaps the most bizarre aspect of the episode. The first letter of each victim's name spelled out the sisters' favorite word: murder, which they painted on a wall in the house. But after just five deaths, the sisters vanished, leaving the word incomplete: murde. Any character whose name starts with an 'R' may want to consider leaving.

Five patients died before the police showed up. Dr. Cunningham believes the ghosts who haunt the house exterminated the sisters before they could finish their murderous rampage.

After listening to the professor's story, Matt wonders whether or not he is telling the truth. Matt returns to the living room where he "dreamed" about the nurses and tears down the wallpaper. What does he find? "Murde" on the wall.

As all of this is going on, Lee seems to have lost her mind. She has returned to the home with a now-abducted Flora, and Matt immediately recognizes that this is a terrible idea. He begins to tell Lee that she could go to jail for felony kidnapping, but she says that the only reason she took Flora is because Mason wants to revoke her visitation rights. But in the midst of their arguing, Flora disappears. Outside, Lee, Matt and Shelby frantically search for her.

After searching through the woods, Lee finally stumbles upon what can only be described as the tallest tree of all time and looks up in horror. At the top of the tree sits Flora's yellow hoodie dangling from one of the branches.

The next episode airs Wednesday at 10 p.m. Eastern on FX. Until then, one question will sit in the back of our minds: Where the hell is Flora?