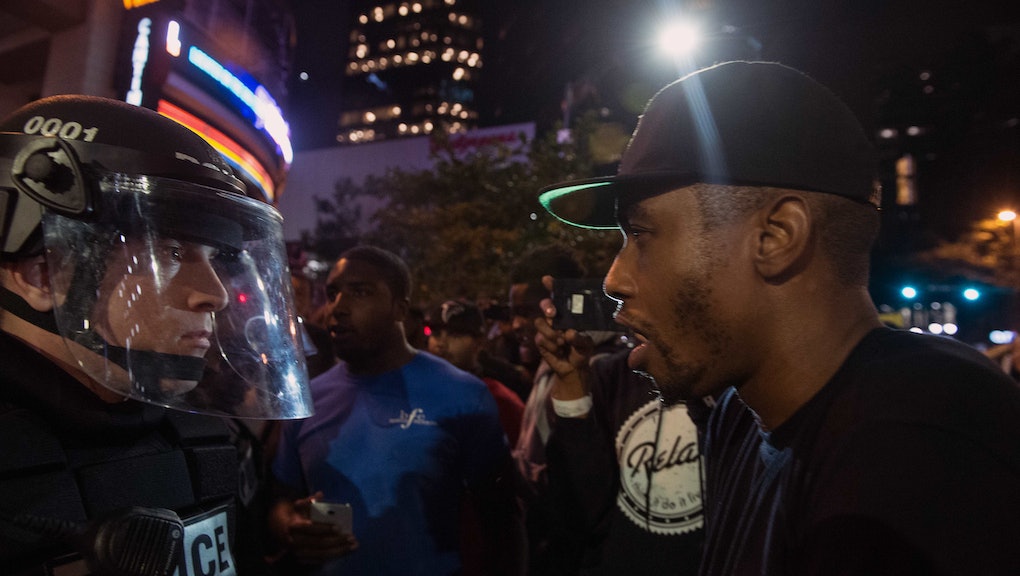 Since the fatal police shooting of Keith Lamont Scott on Tuesday, residents and activists in Charlotte, North Carolina have flooded the city's streets in protest of what they believe is just the latest chapter in the seemingly never-ending story of police brutality perpetuated against minorities in America.

As the protests entered their second night on Wednesday, however, a scene that had commenced with a peaceful candlelight vigil on Tuesday quickly dissolved into chaos.

Here is a brief breakdown of the events that transpired in Charlotte on Wednesday night:

Wednesday night began with a peaceful march. A crowd of docile protestors began a march near Marshall Park and moved towards the police headquarters building, according to Charlotte-Mecklenburg Police Chief Kerr Putney who spoke at a press conference Thursday morning.

As more protestors joined, things turned rowdy. As the march progressed, Putney said, the small group began to grow, and eventually the crowd turned violent and began damaging property. According to Reuters, the Charlotte-Mecklenburg Emergency Unit was deployed near the Charlotte Transit Center.

Amid the building chaos, one attendee was shot. According to Putney, there was one instance of assault with a deadly weapon, which occurred at around 8:30 p.m. outside of the Omni Hotel.

Although the victim is currently in critical condition, the person was originally reported to be dead on Wednesday night. During the press conference, Putney noted that the victim sustained life-threatening injuries, and said that the sheer volume of the crowd of protestors made it difficult for emergency responders to maneuver the wounded person away from the scene.

Putney said that police are investigating claims by witnesses that a CMPD officer shot the victim.

"We're reviewing video [of the incident]... our job is to find the truth, as best the evidence can show us," he said.

Charlotte-Mecklenburg Police Department deployed teargas to manage the crowd. At around 8:43 p.m., gas canisters were fired by police in an attempt to quell the protests, without success.

By 11:55, Putney said, the light rail track had to be halted due to the sheer size of the crowd. Protestors continued to assault officers and damage city property.

"Any violence directed toward our citizens or police officers or destruction of property should not be tolerated," McCrory said in a statement obtained by Reuters.

Putney said that 44 civilian arrests were also made during the protests.

"We have a lot of looting and a lot of businesses that are damaged," he said. "Our intent is to protect those assets so that we don't suffer further damage."