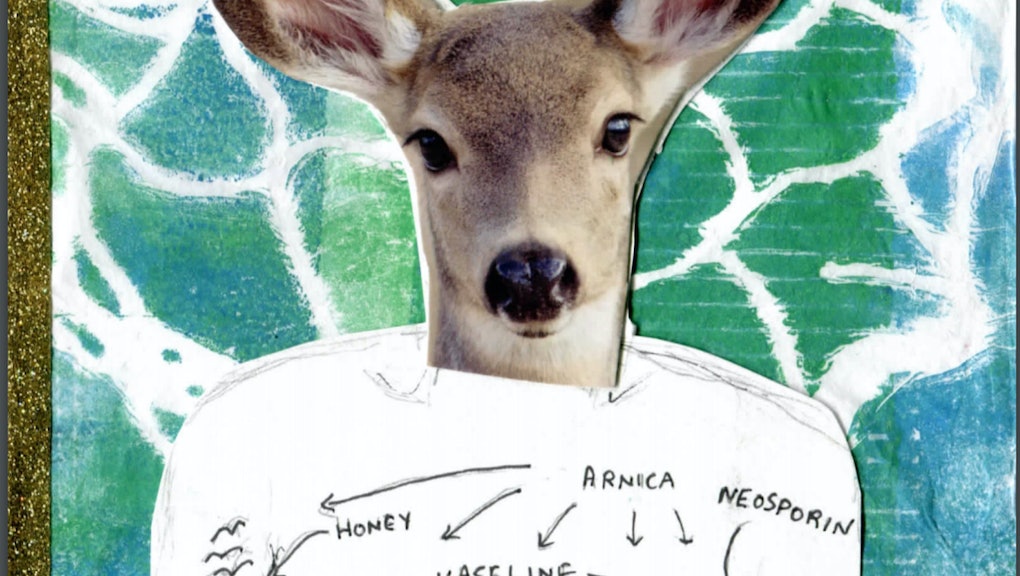 In Oliver Bendorf's 'Top Surgery' zine, a trans man uses humor to recover — and to educate

Before his top surgery — the term many trans people use to describe bilateral mastectomy — Oliver Baez Bendorf didn't have a proper means of describing transgender men's experiences before and after the procedure... so he decided to create one.

In his new zine, Top Surgery, which he is now selling on Etsy, Bendorf uses text, images and even musical notes to describe his experiences.

"One of the best parts of zines is you can include whatever you want, and you can use whatever you have around," Bendorf said in an interview. "Combining image and text is one of my favorite things. Who doesn't like to look at pictures? Something new can happen that is more than the sum of the parts."

Bendorf suffuses the book with lots of humor: When he first wakes up from surgery in a stupor, he asks if the name of the operating room is "Dumbledore."

That humor, Bendorf said, was essential before and during recovery from his surgery.

"The reasons that we laugh are so spread out across the emotional spectrum, with only one slice of our laughter being in response to things that we conventionally think of as 'funny' — puns, slapstick, etc," Bendorf said. "We laugh out of nervousness, grief, relief, stress."

Whether it's the slapstick hilarity involved in his partner dressing him in compression socks or his new slogan — "boobless and fuckless" — Bendorf said that levity has been central to his transition — and it's central to the tone of his zine, as well.

According to Bendorf, the zine evolved from his own diary entries, which explains its casual, humorous tone. In the weeks following his top surgery in July, Bendorf was unable to do any heavy lifting, but was able to cut and glue smaller pieces of paper together to construct the zine.

"I love how zines open up more possibilities for circulating one's work, and how handmade the process is," Bendorf said. "My master copy is very heavy from all the glue and collaging!"

Bendorf's zine comes at a time when the amount of transgender stories online — and what they detail — has changed dramatically. More and more transgender people are using YouTube and other social media outlets to document their own transition, as well as talk about their scars.

Bendorf hopes that, no matter how you identify, you think the guide will be a helpful resource. It's the kind of guide he would've wanted before his own surgery.

"I hope the zine gives people another way of thinking/feeling about their own body, or another angle through which to relate to top surgery, whether they themselves are considering it or just had it, or are close to someone who is," he said. "I don't mean for it to be comprehensive and it's far from it. It's impressionistic, associative, and shifts through modes, sometimes a how-to, sometimes a doodle."

He added, "I tried to make the zine that I would have wanted, myself, to find."