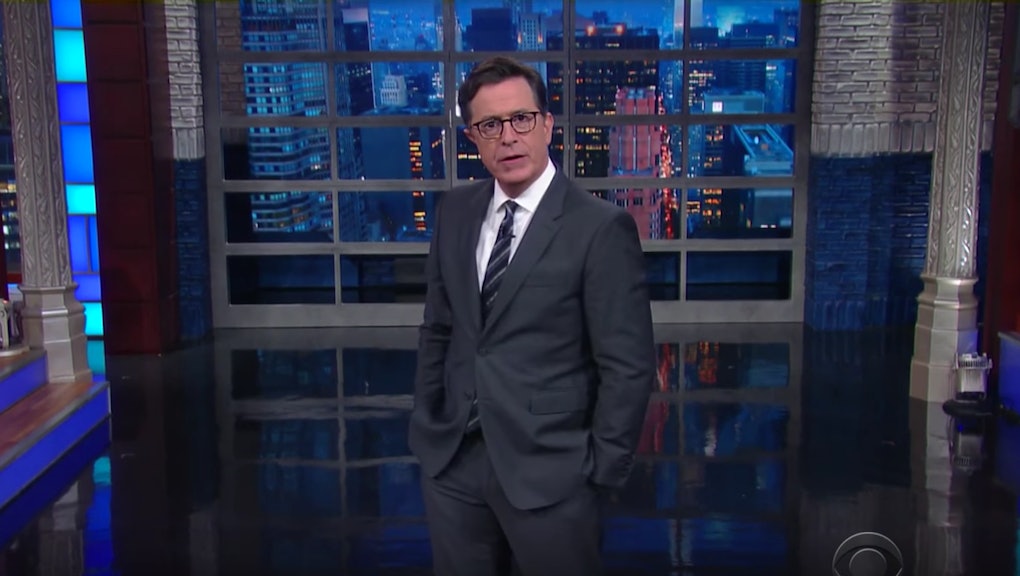 The Late Show host Stephen Colbert offered his thoughts on the protests in Charlotte, North Carolina, on Thursday's show, lamenting another shooting of a black man at the hands of the police. As a result, the protests turned violent, with the governor declaring a state of emergency in the aftermath.

"I just wish there was some sort of respectful, silent civil protests that people could engage in that wouldn't enrage the other side," Colbert said, before showing an image of San Francisco 49ers quarterback Colin Kaepernick kneeling during the National Anthem.

"Well, in the face of continued heartbreaking racial strife, all eyes turn to [the] civil rights icon, the Rev. Dr. Donald Trump," Colbert said, segueing into the Republican candidate's suggestion for stopping violence in black communities.

Trump has recently voiced support for stop-and-frisk policing — which as Colbert noted, has been deemed unconstitutional. Plus, coming from Trump, it'd be a difficult proposal.

"Stop-and-frisk is a bad idea," he explained. "Not only has it been found unconstitutional, but if Trump's doing the frisking, it'll take him hours with those tiny little hands of his."

Colbert then turned his attention to other absurdist claims from members of Trump's campaign, pointing to the candidate's Ohio campaign chair, Kathy Miller, who suggested in an interview with the Guardian that racism didn't exist before President Barack Obama was elected. The face of the interviewer, frankly, spoke for itself.

"That's right, there was no racism until Barack Obama was elected," Colbert concluded. "Martin Luther King didn't just have a dream — the whole thing was an hallucination."