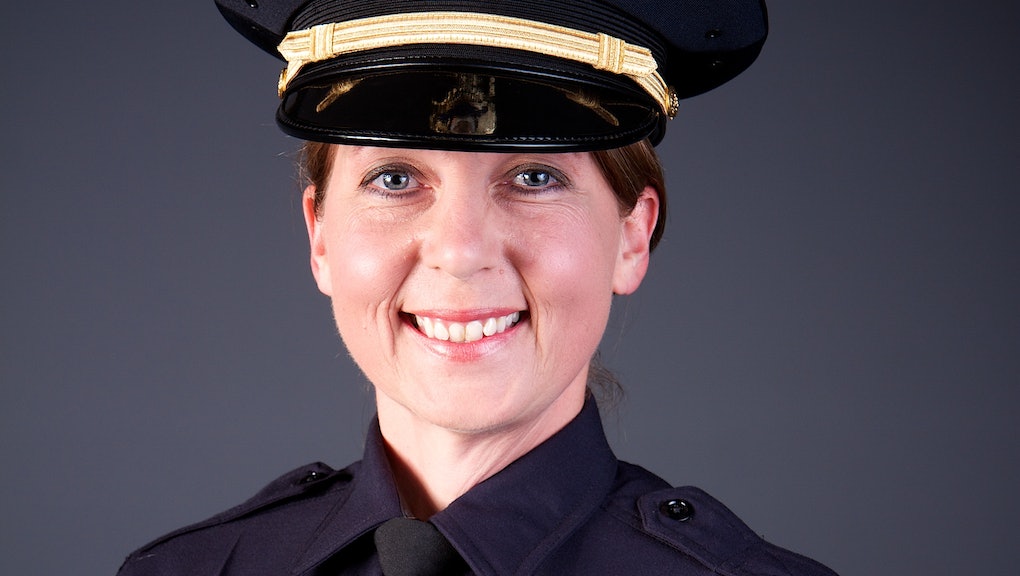 On Thursday, Tulsa, Oklahoma, police officer Betty Shelby was charged with first-degree manslaughter for fatally shooting Terence Crutcher, an unarmed, 40-year-old black man. On Friday morning, Shelby was booked at a county jail and released on a $50,000 bond.

According to a Washington Post report, it's becoming more common for officers to face charges following shootings like Crutcher's. But still, of the thousands of fatal shootings involving police that have occurred since 2005, as of last year, only 54 officers have been charged with a crime. Overwhelmingly, these officers have been white males, forming a clear picture in the public imagination when it comes to the question of who perpetrates police violence.

The charging of Shelby, then, throws us a bit of a curveball.

Though Shelby's clearly white, she's also a woman, which has caused some to wonder whether sexism plays a role in her charges.

"How surprising would it be if a woman, rather than all those male cops, is the first to go to jail for killing an unarmed black man?" Foreign Policy columnist Julia Ioffe wrote on Twitter.

Other Twitter users chimed in, pointing out what they saw as a double standard in who faces charges for police brutality. "I find it suspicious that they're quick to charge a woman police officer, Betty Shelby, but the men police officers go free," wrote @EAMediaLive. Another user called the charges against Shelby "white male privilege at its finest."

Bustle's Melissa Cruz interrogated this gender question in a column published Thursday, writing of Shelby's charges: "Make no mistake — this is what should happen. But it's interesting to note that while Shelby was charged, the male officers responsible for also fatally shooting unarmed black men predominantly weren't."

Cruz speculated that it may be easier to pin blame on Shelby because she's a woman. But Zoé Samudzi, a 23-year-old a sociology PhD student at UC San Francisco, said it's possible to make the exact opposite argument — that it's conceivable Shelby could get away scot-free, thanks to a trope that portrays white women as victims of black men.

"We know virtuous white womanhood has been a trope that has driven criminalizations of racialized bodies," Samudzi tweeted. "When fragile [white women] are confronted by black monstrosities, why would we believe they wouldn't be seen as more justified in using force?"

In a phone interview Friday, Samudzi said it's this kind of nuance that's missing from conversations surrounding Crutcher's fatal shooting. People are used to talking about police brutality purely within the context of race, she said — so when other identity categories like gender get thrown into the mix, no one's quite sure what to make of it.

"There's this unwillingness to recognize that white women have power in proximity to whiteness and aren't simply oppressed by their gender," said Samudzi. "In this case, we're talking about a white woman who is in a dominant position with the power to use fatal force as mandated by the state."

Samudzi said it would be peak white feminism to focus solely on Shelby's gender: The Tulsa officer's whiteness and womanhood are inextricably linked.

If calling for Shelby to receive equal treatment to her male colleagues — who've largely escaped criminal charges and convictions — is feminists' benchmark for equality, it's an "incredibly twisted" one, said Samudzi.

"If you're not looking at the ways different kinds of womanhoods are constructed, you have no understanding of what gendered oppression looks like or gendered liberation," she said.

Shelby could play what Samudzi calls the "fragile white womanhood" card, which might turn out in her favor. Or, because she's a woman, she might be seen as disposable and punished to the extent of the law if, for a moment, to "shut up black protesters" and create an illusion of justice, Samudzi said.

Of course, anything could happen — and ultimately the decision won't be made by the court of public opinion, but by a judge and a jury who will have to figure out what to do with a white woman who fatally shot a black man.

"It's not easy to say which way it's going to go," Samudzi said. "White supremacy is violent, but it's also fragile and temperamental — it doesn't always act in ways we can predict."