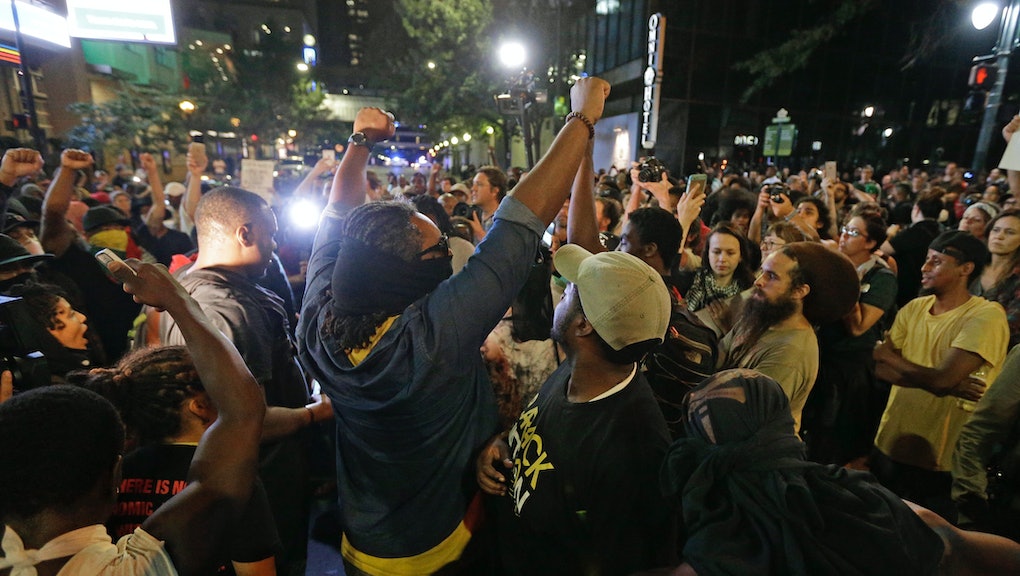 Why are they "rioting" in Charlotte? Here's the problem with that question

In the three days since the police killing of Keith Lamont Scott in Charlotte, North Carolina, community activists have organized protests to draw attention and express consternation over his death. To many observers, this marked yet another inexplicable death of a black man at the hands of officers operating under a broken police system.

Some of those peaceful protests escalated when heightened police presence met protesters in the streets. On Wednesday night, one protester was shot, and later died, two officers were injured and 44 protesters were arrested. In response, several news outlets have used the term "rioters" — one that connotes violence and lawlessness — rather than protesters to describe the people involved in the demonstrations.

In one example, the Wall Street Journal said the riots in Charlotte "upended" the town's civic identity.

Since a riot is usually characterized as "violent public disorder," using the term "riot" places blame on the communities who feel its their very safety that is at risk. And while many are quick to condemn demonstrators in Charlotte, some of the most historic events in this nation's founding were characterized by sometimes violent protest — including the Revolutionary War and the Boston Tea Party.

Raleigh-based organizer Conrad James, told Mic in an earlier interview the media's emphasis on rioting and looting exacerbates the false notion that everyone in Charlotte is responding violently to Scott's death, when the majority of protesters acted lawfully.

On Thursday, USA Today published a letter to the editor which asked that more people call the protests "riots" and the protesters "rioters." Much like the response to Colin Kaepernick's decision to stay seated during the national anthem — a move that critics said was unpatriotic — some people have found fault with how Charlotte's black citizens have chosen to voice their outrage with their police force.

The double standard about how we talk about responses to police brutality is nothing new. While people of color protest people being killed in their own communities, white people often riot, without fear for their lives or media backlash, for something as ordinary as their favorite team losing a championship game. With public opinion turned against the protesters, it becomes even harder for those protesting to achieve peace in their own backyard.

"What I saw was a lot of young folks who were organically and peaceful protesting, simply standing and taking up space," community organizer Cherrell Brown told Mic in a phone interview on Thursday. "Their response to peaceful protesters holding space and taking care of each other was to tear gas us."