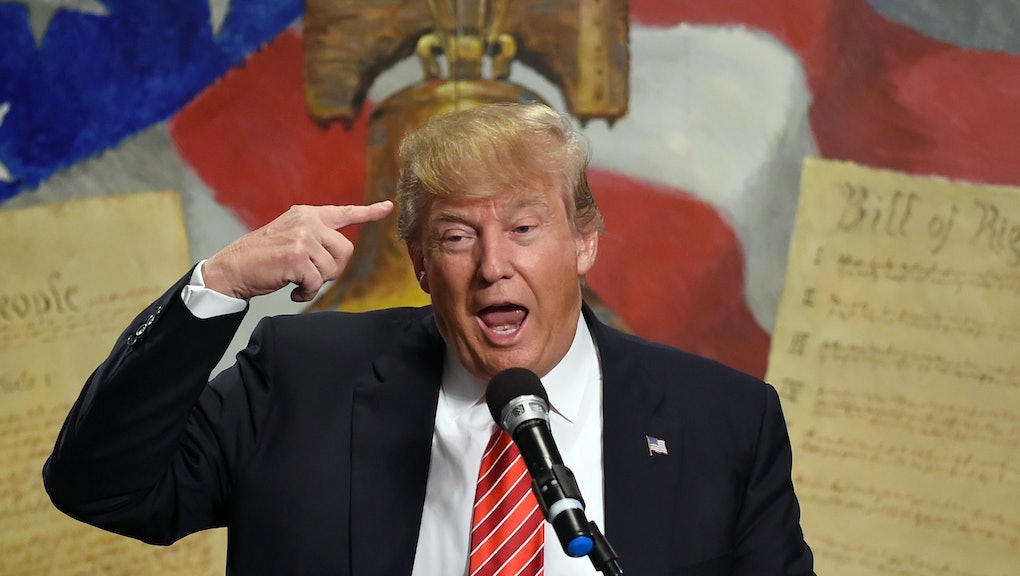 The first presidential debate doesn't begin until Monday night, but the mind games are well underway.

After Mark Cuban, the billionaire Donald Trump critic, gleefully announced that he'd attend the Hofstra University showdown courtesy of the Hillary Clinton camp, Trump returned the "favor" by floating an appearance by Gennifer Flowers, the former mistress of Clinton's husband.

Later, Republican vice presidential nominee Mike Pence said that Flowers would not, in fact, be attending the debate.

Whether this possible psych-out is childishness or smart strategy is in the eye of the beholder, it falls squarely into the category of psychological warfare — which may prove a potent tactic in this year's debates.

The larger question: Should Clinton, a former secretary of state whose experience in government and world affairs far outstrips Trump's, lean on her track record alone to impress the American people — or should she try to get him to blow his stack on live TV?

Of course, there's plenty of dispute over whether Trump can stay chill in not one but three scheduled debates.

Among those who think he can: Dana Perino, who moved on from her role as the first female Republican White House press secretary to become co-host of Fox News Channel's The Five and I'll Tell You What, a Sunday show born of a podcast.

"I do believe he will be able to keep his cool for 90 minutes, and she will try to poke him, and he will try to poke her," Perino said in a phone interview. "He has 20 years of television experience, so he's great in front of the camera. ... Even though she's been in public life for so long, she is not a television personality."

In debates, Perino said, "the goal is to try to get a rise out of someone so that they have one of those non-verbal moments of frustration, or they sigh or they roll their eyes — those are the kinds of things that people are looking for."

For Clinton, Perino said, "I think that the smaller her debate prep book is, the better off she'll be. She is really good on the policy. She is a nerd and a wonk after my own heart — I love that part — [but] at some point you have to put the notes away" and exude "good energy" while she attempts to appeal to new and younger voters.

Clinton isn't new to this format.

She stood at the podium in her successful 2000 run for U.S. Senate against Republican Rep. Rick Lazio, during her failed 2008 bid for the Democratic presidential nomination against then-Sen. Barack Obama and, of course, against Sen. Bernie Sanders in this year's primary.

While reports suggest the studious Clinton will be thoroughly prepared — if not over-prepared — while Trump characteristically wings it, past debates hyped as mismatches have produced surprising results.

Trump is newer to the debate stage, but he proved himself fairly impervious to even personal attack while running the GOP primary gauntlet.

That was then, though, and there's no shortage of forecasters who say Clinton can let Trump self-destruct while focusing on getting her message out to the voters.

"I don't think Clinton needs to do anything in particular in order to goad Trump into displaying his un-presidential temperament. He is very likely to do that of his own accord," said Ian MacMullen, who teaches political science at Washington University in St. Louis, which will host an upcoming debate.

"The challenge for Clinton is not, therefore, how to get Trump to show himself in a negative light, but how to present herself to [the] audience. Put simply, she should try to be relaxed, positive, funny, and likable ... perhaps even a little self-deprecating," MacMullen said via email.

Neither Clinton nor Trump representatives would comment on the record about the psychological aspects of the three debates, but MacMullen said the element of surprise may be key: "I expect Trump to say something in the first few minutes that is intended to throw the whole debate in some unexpected direction," he said — perhaps dropping some new bombshell "truth" about Clinton's health, emails or family foundation:

"Clinton must simply strive not to be thrown by whatever stunt Trump pulls. Don't get angry or flustered. Laugh off his more ridiculous provocations, quickly state her basic position on the question, and then get back to an upbeat and confident presentation of her views."

While Trump is apparently capable of letting jokes about his hair care slide, he's gotten huffy about other things — his net worth, his career, how he talks about women. He's (sort of) apologized for some and flamed critics on others.

With the polls tight, the stakes are high, so both candidates will presumably be on their best behavior Monday.

That doesn't mean they're immune to attack — and both have weak spots.

"Clearly, Mr. Trump is most sensitive about his record as a businessman — it's the core of his brand and a source of great pride for his family," said Michael Caputo, a former Trump campaign aide.

"Attack failed ventures, you get a Trump Steaks press conference. Attack Trump University, you get counterattacks on the judge," he said. "If I were advising Clinton, I'd tell her to go after his business acumen. If I were advising Trump, I'd tell him to expect [Clinton to make] inaccurate and unfair attacks on his businesses — and [not] go off the rails when she does."

As political psychologist Bart Rossi has previously said, Trump's nonchalance wavers when confronted about his past bankruptcies — a peeve Clinton might use to get in her rival's head.

Said Caputo: Trump's "answer when he's most frustrated and boiling over after an attack on his business: 'There she goes again, lying to America. She lies about [her] emails, she lies about her pay-to-play foundation, she lies about her [health]. ... You sure can't believe her now or in the White House.'"

Then, Caputo said, if Trump doesn't want to appear rattled, he's got to "pivot to an attack."

Bottom line, "If you're explaining a casino bankruptcy," Caputo said, "you're losing."