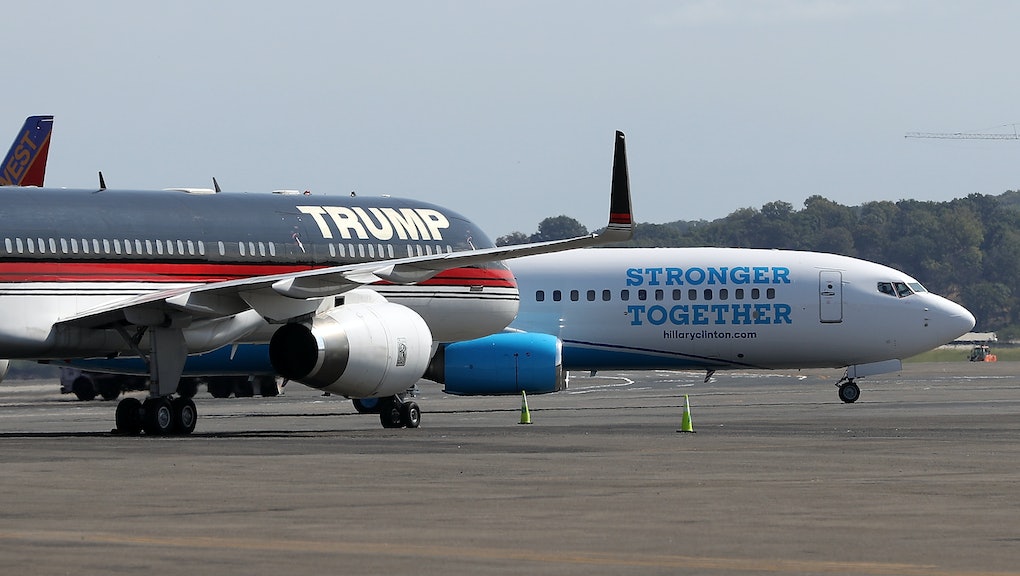 Republican nominee Donald Trump and Democratic nominee Hillary Clinton will face off for their first debate on Monday night — and polls show that the race in the popular vote between the two candidates has narrowed considerably.

The most recent Washington Post-ABC News poll released on Sunday shows Clinton leading Trump just 46% to 44% among likely voters, an uncomfortably small lead which puts Trump well within the poll's 4.5% margin of error. As the Post noted, in early September Clinton led by 5%, and in August her lead was roughly four times as large at 8%.

The results add to Clinton's already concerning dip in the polls and thus the urgency of a good Democratic showing in Monday night's debate.

Poll aggregator Real Clear Politics, taking into account the new poll results, judged Clinton's average lead as shrinking from 3% Saturday to 2.5% as of Sunday. On Friday, pollster Nate Silver's FiveThirtyEight listed Trump as having a roughly 38.1 chance of victory in their polls-only forecast and 38.6% in their polls-plus model incorporating historical and economic data. On Sunday, those numbers had shifted toward Trump's favor to 41.9% and 42.4% respectively.

That's still not close to parity for Trump — but just months ago in late June, FiveThirtyEight's polls-only model predicted a 20% chance of victory for the real-estate billionaire. Since Trump benefits from the very real phenomenon of lowered expectations, even a just-acceptable performance at the debate could push him even closer to overtaking Clinton.

It still isn't time for full-on panic. The electoral college, which is what actually chooses the president, is a significantly more challenging road for Trump than the popular vote. It's possible Clinton will crush the indisputably less-informed Trump at the debates, and even continued strong showings in the polls may amount to nothing if Trump's comparatively pitiful ground game fails to push his supporters to the polls on Election Day. But the race has still narrowed in the lead-up to the debate, and up to half of voters rank the outcome of the debate as being at least somewhat important to their eventual choice in November. Gulp.