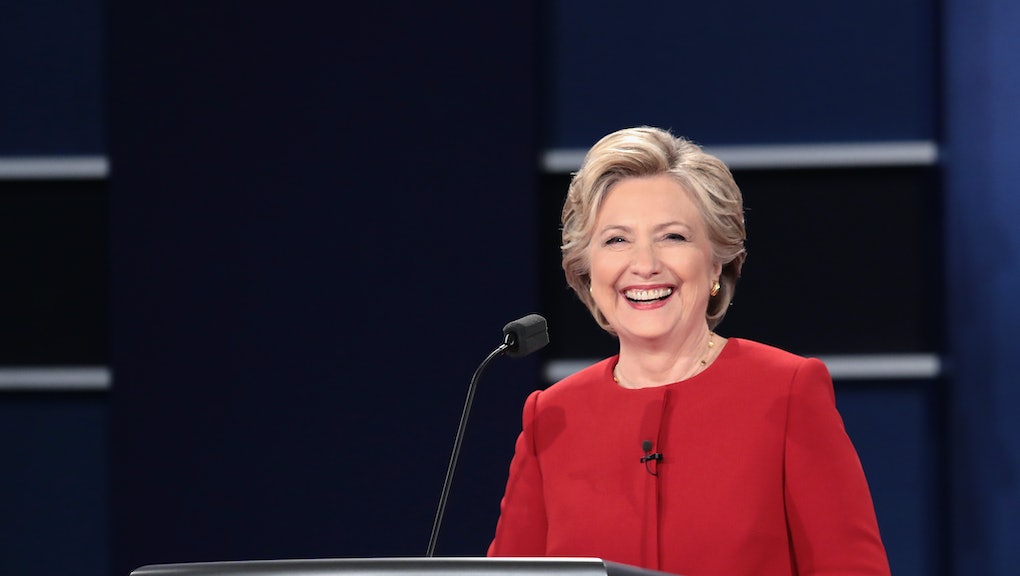 Hillary Clinton won the first presidential debate, and it wasn't even close

HEMPSTEAD, N.Y. — That sound you hear is the entire Democratic Party exhaling.

"I think it may be the most lopsided debate ever," a relieved Clinton campaign official said halfway through the debate.

Clinton won by letting Trump shoot himself in the foot over and over again, keeping her cool as the Republican nominee repeatedly interrupted her and continued to lie about his past positions. She was prepared, poised and patient as Trump repeatedly took her bait, overreacting to Clinton's attacks and walking into the traps Clinton laid for Trump over his business record and political history. She was funny without being inauthentic, and the contrast with Trump's unhinged performance was striking.

"He became unhinged all on his own," Clinton campaign manager Robby Mook told reporters after the debate.

Clinton successfully walked the line between offering a positive vision for the country and tweaking Trump just enough to make him fly off the handle. She coolly answered the questions posed to her by NBC News' Lester Holt, typically using the first half to rehearse her policy positions before turning to needling Trump, who couldn't help but respond in a manner that made him come across as condescending and bullying. Clinton did this again and again, and Trump almost always fell for it — on jobs, on trade, on taxes, on his business record, on foreign policy, on race.

Trump was reduced to interrupting her, lying about his own past and muttering "wrong" while Clinton was speaking.

A representative exchange of Clinton providing Trump enough rope to hang himself came about midway through the debate, when Clinton turned to Trump's history as a businessman. Exploiting Trump's sensitivity over questions about his wealth and real estate acumen, Clinton went right in.

"If your main claim to be president of the United States is your business, then I think we should talk about that," she said. "Your campaign manager said that you built a lot of businesses on the backs of little guys. And indeed, I have met a lot of the people who were stiffed by you and your businesses, Donald."

Clinton then mentioned the fact that an architect who had not been paid by Trump was in the audience, to which Trump responded, "Maybe he didn't do a good job and I was unsatisfied with his work, which our country should do too."

She later got Trump to say, "I take advantage of the laws of the nation" while defending not paying income taxes for years.

Those were some of the quintessentially Trumpian responses, the kind that make Republicans cringe and Democrats squeal with glee, particularly given Trump's lead among working-class white voters. Trump continued to melt down as the debate went on, angrily claiming, "My strongest asset, by far, may be my temperament." Clinton laughed, "Hoo wee!"

Throughout the night, she managed to criticize and correct Trump without coming across as arrogant. Her reactions to Trump's were not unlike how many viewers must have reacted at home: "Can you believe this guy?" Toward the end, he said Rosie O'Donnell deserved the sexist insults he'd lobbed at her appearance.

That happened. In a presidential debate.

If expectations were any lower for Trump coming into the first presidential debate, they would have been underground. But somehow, Trump managed to dig a tunnel underneath them. Clinton won the first debate in a landslide.