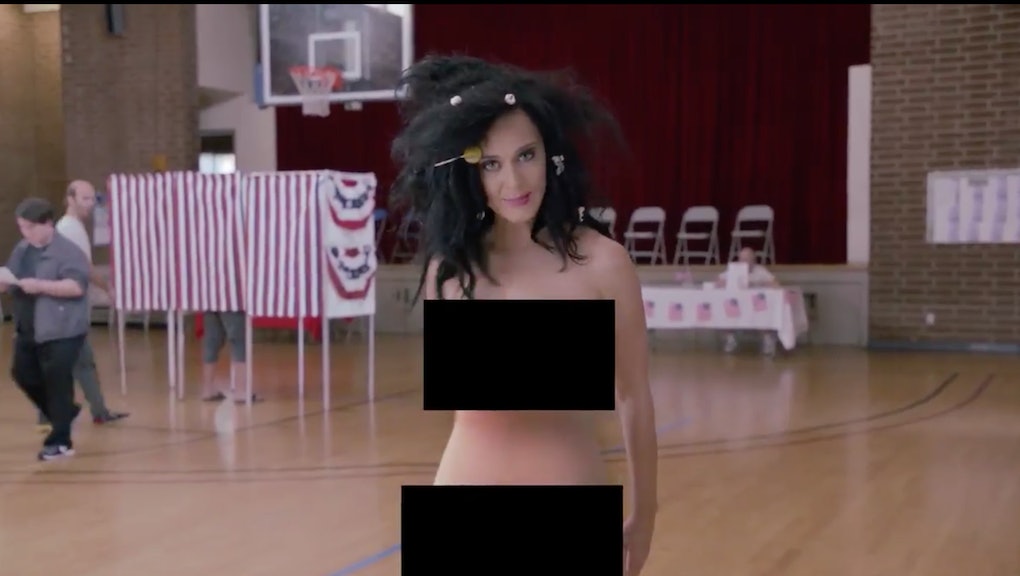 Last week, Joss Whedon encouraged Americans to vote with a promise that Mark Ruffalo will do a nude scene in his next film. Tuesday Katy Perry attempted something similar to celebrate voter registration day, filming herself hitting the polls naked.

"Tomorrow I use my body as click bait to help change the world," Perry announced Monday on Twitter. In the sketch produced by Funny or Die and Rock the Vote, she learns you can't actually show up to the polls naked, but you can wear pretty much anything else you want.

"Nov. 8 is Election Day, and I've got some great news," she says in the video, sporting a wild hairdo filled with popcorn and gum. "This year, you can look like shit when you vote. Yep, I've briefly scanned the Constitution and nowhere does it say you can't just roll out of bed and come to the polls in whatever state you woke up in."

Perry did a brief run-down of potential looks, suggesting out-of-bed voters might wear children's onesies, put on acne cream or be a "hunk in kids' briefs."

But Perry's admission that she sleeps naked — as she rips off her pajamas — is quickly halted by two police officers who cuff her. So yes, you do have to wear clothes at the polling station, otherwise you'll end up in the back of a police car with... Joel McHale?!

Moral of the story: Get to the polls on Nov. 8, but make sure you're wearing some type of clothes when doing so.