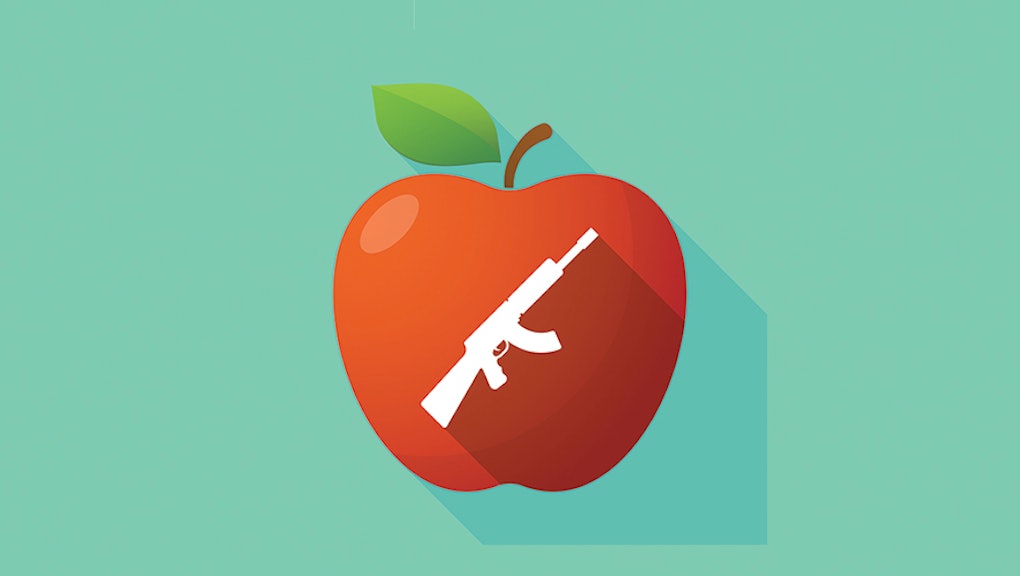 In 2015, the Guardian published a list of 24 ways to reduce crime in the most violent cities in the world. Suggestions included avoiding repressive policies, moving the focus away from poverty and putting the focus more on gun control. One thing missing from the list? Nutrition.

The rapper Common is among the many people who says a healthy diet can help prevent and reduce violent behavior. "Eating healthy will contribute toward better behavior and productivity for people within our communities," he told DNAinfo in August. While Common was speaking specifically about neighborhoods in the Southside of Chicago, which have incredibly high rates of gun violence, his statement can apply to other cities, and it's backed by science.

"There is backbone to the argument Common is raising," Alex R. Piquero, a criminology professor at the University of Texas at Dallas said in an interview. Piquero is the co-author of a study recently published in the International Journal of Environmental Research and Public Health which found that people who reported frequent hunger, and thus a lack of nutrition, as a child were more prone to being involved in violent acts in adulthood.

It all comes down to an individual's impulse control. "It is pretty well known that people who can't control their impulses commit crimes," Piquero said. "But I wanted to go further back and see if childhood nutrition had an affect on impulse control." Impulse control is not just psychological, but also has a biological basis that the medical sciences are just starting to figure out, so it made sense to look at its link with nutrition, he added.

Piquero and his researchers analyzed a national level data set of nearly 35,000 people in which participants were asked to indicate whether or not they went without food growing up. "We found that people who experienced frequent hunger were more likely to have impulse control problems in adulthood, and thus more likely to commit violence."

Another study by a Dutch research team published in Aggressive Behavior in 2009, found that behaviors issues were linked to deficiencies in omega 3 fatty acids. These fatty acids are most commonly found in nutritious foods like salmon, eggs and walnuts, WebMD noted.

The results? The number of disciplinary incidents, which tend to be violent in nature, dropped by 35% in the group on the supplements, while the number dropped by only 6.7% for those in the placebo group, Psychology Today reported.  Incidents that were "especially violent" dropped by a whopping 37% in the group that was on the health supplements.

So is healthy food the solution to lowering crime rates?

Piquero offered up a firm "yes." While more research is needed in regard to healthy eating as an adult and the reduction of violent behavior, Piquero thinks providing all kids with enough nutritious food is a good way to start making a dent in the problem.

"We have to feed kids well early in their lives because their brains are developing in the first five to seven years." — Alex Piquero

"I think it's in everybody's best interest that kids get fed, and get fed as nutritiously as possible," Piquero said. "We have to feed kids well early in their lives because their brains are developing in the first five to seven years," he added. It's critical to make sure that the kids are fed well during these years because it will help them "increase their attention spans in classes, decrease their lack of impulse control."

Studies have shown that kids who do not get enough to eat have a tough time paying attention in class. "If kids are able to pay attention in school, they are going to do well, and this will help them land a good job and avoid other factors that lead to violence behaviors," Piquero added.

Programs, such as No Kid Hungry, exist to serve children healthful food, Piquero said, but there needs to be more. "Something as simple as giving healthy food to kids when they are young is going to have so many more benefits that go on throughout the rest of the kids life," he added. "And it not only affects the kid, but everyone that kid interacts with."

A change has got to come.

There are 16.2 million children in the U.S. who live in food insecure households, or homes that don't have the means to get enough nutritious food, according to No Kid Hungry. It's a case of coming from families with a lower socioeconomic status, Piquero said. A lot of these kids only really get meals at school, Piquero noted, because they can't afford to eat outside of it. Unfortunately, school isn't in session all year around, though the USDA does have a summer food program to help provide meals.

It's a lot cheaper to provide healthy foods to children than to put someone through the incarceration system in the U.S.

Keeping someone in the incarceration system for one year can cost anywhere between $31,307 in some states to $60,000 in states like New York and Washington, CBS reported.