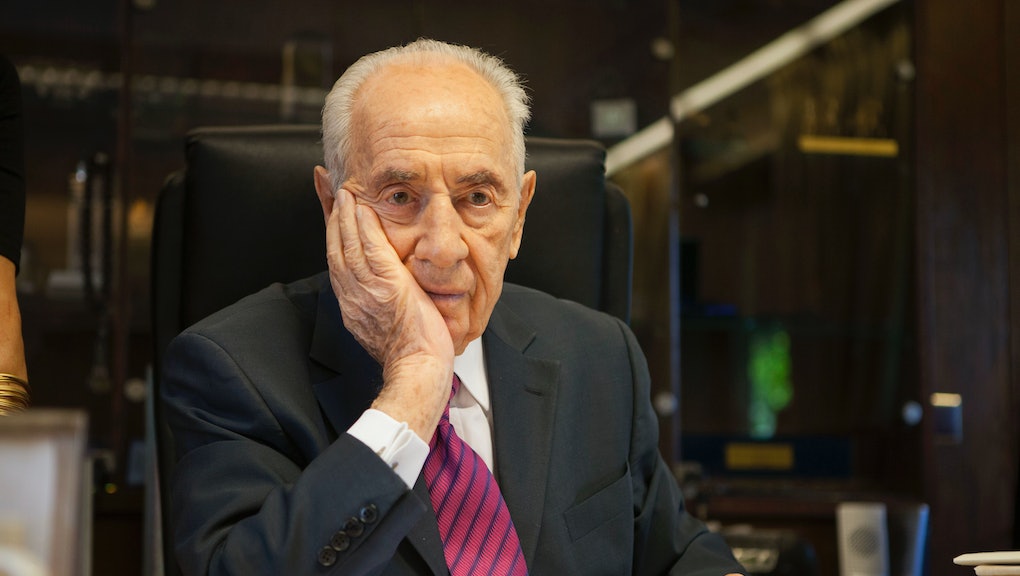 As these tributes attest, Peres is probably going to be remembered as one of the last great statespeople in the world — a man who was, until his last day, the epitome of a true diplomat, long before politicians provoked one another over Twitter.

The popular memory: In his last official position, as the nonpartisan, symbolic head of a state constantly divided among itself, he was seen as the peaceful face of Israel, keeping the country's image as a modern, developed nation, aspiring for peace. We Israelis were constantly reminded that he was awarded the Nobel Peace Prize, alongside Yitzhak Rabin and Yasser Arafat, for his part in the 1993 Oslo Accords, which were supposed to be the introduction to a sustainable and everlasting reconciliation between Israelis and Palestinians.

Being a public servant, elected or not, can prove an unthankful job, to say the least — especially nowadays, when everything you say or think is archived in seconds, and social media allows every single person to state an opinion just as if he or she were seated at the head of the table in the situation room.

But this doesn't mean we should give a free pass to someone just for embarking on the difficult undertaking of public service. On the contrary, it is our obligation to be critical of everything we hear or read from and about public figures — and our generation excels in this task.

This is extremely important in Israeli politics, which are very different from American politics. Being a small country, speaking a language spoken by only about 9 million people around the world, we don't have the vast amount of information Americans have at their fingertips. Questioning every single piece of information we receive is crucial to the country's well-being, and more importantly, its citizens.

Wrestling with a complicated legacy: In Hebrew there is a saying: "Achrei Mot Kedoshim Emor." It's constructed of the names of three consecutive Torah portions ("Parashot") in Leviticus, and loosely translates to "do not speak ill of the dead."

Yes, Peres' death marks the end of an era, an era most of us didn't even know outside history classes. But despite his noble acts, we must not be trapped by the notion of that saying.

I cannot attest to Peres' personality. I have never met him personally, nor have I spent time with him while he played with his grandchildren. But when it comes to a public figure, this is rarely the main issue.

What I do remember is that, in spite of being the symbol of Israel's peace efforts, Peres supported the first settlement in the West Bank that was erected in 1975, when he was defense minister under Rabin, opening the door to many other settlements established from then on.

He was also not shy of political schemes, named "the indefatigable subversive" by Rabin in his 1979 autobiography, for trying, behind Rabin's back, to replace him as prime minister. Later on, Peres' "dirty trick" (also a name given by Rabin) tried to dismantle a national unity coalition headed by Yitzhak Shamir, by signing secret deals with other factions of the coalition.

He had no luck with these two schemes, like in many of his other political battles. He lost the elections to Benjamin Netanyahu, now once again Israel's prime minister, by a mere 1% in 1996 after Rabin's assassination. Four years later, Peres lost the Knesset's vote for presidency to Moshe Katzav. The joke those days was that he couldn't even win if he ran against himself.

To some extent, he was not even a beacon of human rights, as some might think — siding with Jerusalem's three-religion clergy against holding the World Pride march in 2006, thereby giving its opponents verbal ammunition for the riots around this LGBTQ event.

Rehabilitation: Only when the Knesset, Israel's parliament, finally voted him in as president, in 2007, did his image undergo a significant transformation. Suddenly, Peres became a figure, a symbol, rather than an actual person. He might have rethought his earlier hawkishness because he had genuinely changed his mind about things — from an elder statesman's perspective, you can see things differently.

He may also have aspired to his official, almost regal position in the public mind as part of a bid to reinvent himself, and he worked hard to make sure it happened. He became a statue of a man with plasticized values that spoke a lot but often said nothing, and suddenly, he was celebrated as the man of peace, with Rabin long out of the picture.

We should demand our leaders be symbols of humanitarian values not by elimination, but by inclusion.

We should be wary of metamorphoses like this one that try to blind us, and usually succeed. Peres was not an evil man. He was simply a politician, and quite often, the petty kind. The only way he could transform himself so easily was that he filled the gap of what the values of peace and inclusion the world expected from Israel but never received from the right-wing Netanyahu, who served as prime minister throughout Peres' presidency. But we should demand our leaders be symbols of humanitarian values not by elimination, but by inclusion.

There's no doubt that his legacy of public service will carry on, and it should. This man gave almost his entire life for the benefit of Israel and its people. But in an era of hyper-polarized politics, where we taunt an American presidential candidate for having pneumonia, we should remember that even an icon like Peres had his flaws. We can't allow ourselves to be mesmerized by an image of perfection.