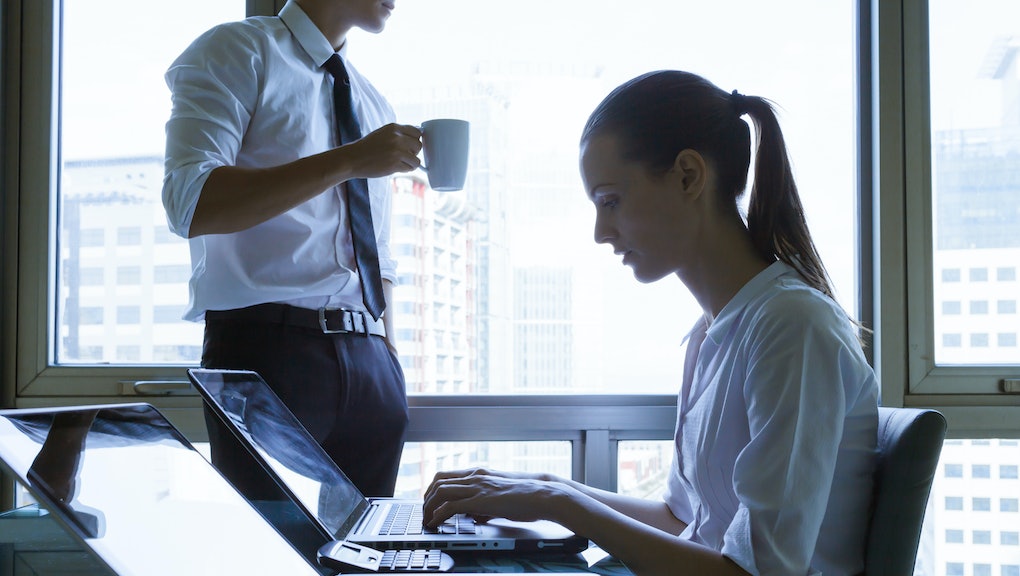 Men are promoted to first-level managerial positions 30% more often than women, according to a new study released by McKinsey & Co. and Lean In.

Specifically, for every 13 men who get promoted to their first "boss" job, only 10 women do the same. The report suggests that women's stymied advancement early in their careers could be a major reason most never make it to the C-suite.

"I think what was particularly surprising was the finding about the first promotion," Alexis Krivkovich, co-author of the study titled "Women in the Workplace 2016," said to Mic by phone. "I certainly anticipated that the early years would be most even [between men and women], but what the data shows is the reverse — and that has implications for the rest of a woman's career."

Perhaps unsurprisingly, then, the report found a third of women self-reported that they believe their "gender will make it harder to get a raise, promotion, or chance to get ahead."

Just in July, $100-billion-company Qualcomm agreed to pay around $20 million in a class-action lawsuit that claimed women at the company were unfairly paid lower salaries and not promoted.

And Qualcomm is hardly the only company where women have lagged male peers. While men and women enter the corporate workforce at almost exactly the same rate, 80% of C-suite executives are male, the recent report found.

Rates of promotion are even worse for women of color, only 3% of whom end up in those top positions, like CEO or COO.

Certainly, part of the problem, the report authors suggest, is that women don't always aim for senior executive positions — the challenges can sometimes seem too daunting.

"Women anticipate a steeper path to the top," the report found. "Women who aspire to become a top executive are less likely to think they'll get there than men with the same aspiration — and more likely to worry they won't be able to manage work and family commitments."

But bias and perception can be just as much of an issue too. Managers are about 10% more likely to hesitate in giving difficult feedback to women because they're "concerned about an emotional breakdown," the report found.

Women are also less likely than men to be asked for input on important decisions, participate in high-level meetings, or be given challenging assignments — all of which may contribute to professional attrition, the study reported.

"At the root of it is unconscious bias," Lean In president Rachel Thomas said by phone. "Women and men tend to overestimate men and underestimate women. History tells us men are leaders, so people have that expectation."

The consequences of this bias are many, and go beyond promotion rates.

The report mentions, but doesn't dive deep into the gender wage gap, whereby women earn on average around 80 cents for every man's dollar. And, again, race impacts pay, too — Latina women lose twice as much as white women over a lifetime to the wage gap.

In many regards, women face the same barriers their mothers' generation did in the workplace, as a piece on the report in the Wall Street Journal points out: The proportion of millennial women who say their gender hurts them at work is "only slightly lower than what older generations of women reported."

But both Thomas and Krivkovich say they remain optimistic, encouraged by the proportion of companies that declare gender diversity to be a top priority — 78% in the 2016 report, to be exact, a considerable increase from the 56% of companies that said it was a priority in 2012.