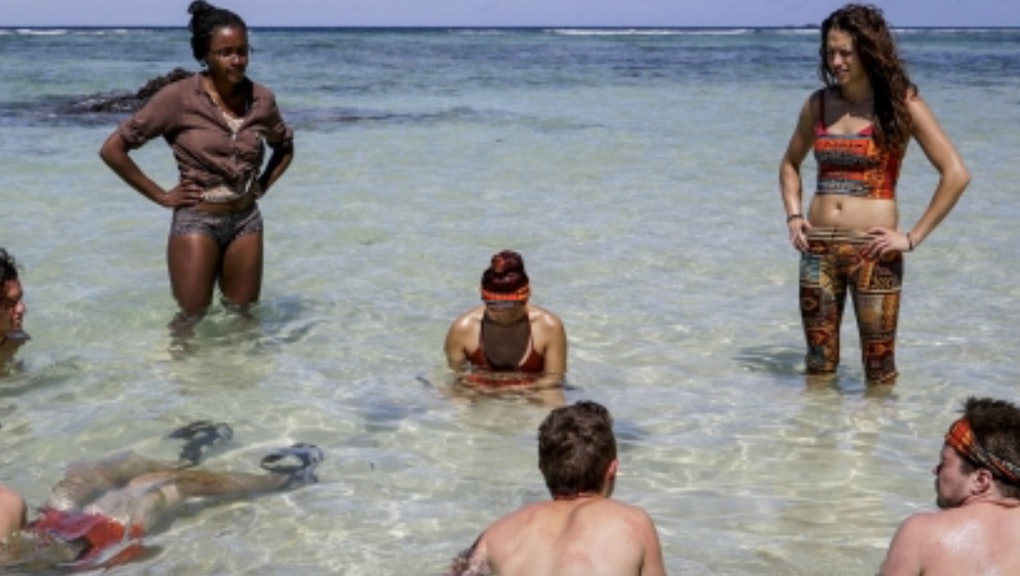 Welcome back to the 33rd season of Survivor: the exciting social experiment where millennials presumed not to know the meaning of real work (one is a professional gamer, for heaven's sake) try to outlast Generation Xers in the Fijian wilderness.

On episode two, things in Fiji get hot — both literally and figuratively. While Jessica "Figgy" Figueroa and Taylor Lee Stocker take their flirting to the next level, Paul is treated for heat exhaustion and dehydration, but doesn't have to leave the game. The same can't be said for Mari Takashi, the aforementioned professional gamer, who's eliminated at Tribal Council.

But let's get back to where we left off last week. It's day five, and Gen X still hasn't managed to start a fire. Enter David Wright, the paranoid TV writer scared of his own shadow, and a clear contender for the next chopping block. In an inspiring zero-to-hero narrative, David starts the fire. But will it be enough to prove his worth to his tribe?

Under the pretense of collecting rocks to use as chairs around the fire he started, David scurries through the woods in search of a hidden Immunity Idol. Lo and behold, he finds one. "I never thought this was going to happen to me," he says in disbelief.

Over at the Millennials' camp, Jessica "Figgy" Figueroa and Taylor Lee Stocker are in full-on flirt mode. "Those blue eyes, they are dangerous," Figgy gushes to the camera. Wait — oh my gosh — in the next scene, it's the middle of the night and they're making out. What?! Have they not been eating ants and dirt for a week without brushing their teeth? Do their armpits not reek? Nay, those obstacles won't impede Taylor's path to love.

"Millennials are dreamers, and I'm dreaming big," he proclaims.

But Justin "Jay" Starrett, Figgy and Taylor's buddy, is worried. "Power couples don't last," Jay warns Taylor. Clearly, Jay is too young a millennial to have ever heard of Rob and Amber Mariano.

Now, for the most impressive feat of the episode: Ken McNickle, the guy who lived "off the grid" in Hawaii and knows all things about all nature, catches an octopus. A freaking octopus.

David, unsurprisingly, is terrified of the octopus — but he's enamored with Ken. To solidify a bond with Ken, David shows him the hidden Immunity Idol he found. The pair bands together in the hopes of taking out boat mechanic Paul Wachter, Mr. Bossy Pants around camp.

They'll need more allies; a little while later, Ken recruits Ciandre "CeCe" Taylor to target Paul, too. Speaking of Paul, what the heck is happening to Paul? All of a sudden, his hands begin shaking uncontrollably as he lies on the beach, and producers radio for medical help.

"I'm not in control; I'm always in control," Paul moans, as a doctor tests to see if he's had a heart attack. The results? No heart attack; just heat exhaustion and dehydration. Paul doesn't need to be airlifted away, and is permitted to stay at camp, and in the game.

Finally, it's time for a challenge — a reward/immunity combo. The contestants have to swim to a platform, jump for some keys, dive for some rings and toss the rings around a series of floating poles. The Gen Xers — unburdened by the weight of ironic mustaches, perhaps — leap, swim and ring-toss their way to victory.

That means the Millennials are headed to their first Tribal Council. When they return home from the challenge, a group of castaways plots to take out Figgy. The group includes Hannah Shapiro and Michaela Bradshaw, the latter of whom has clashed with Figgy over her behavior around camp.

Meanwhile, the Michelle Schubert-Jay-Figgy-Taylor alliance needs to up its numbers. The fours manage to pull Michaela into its ranks, but they'll still need one more player to tip the scales in their favor.

It's time for Tribal Council. As Jeff Probst banters with some of the castaways, Michelle stealthily whispers to Hannah that she's voting for Mari. While Figgy and Taylor regale Jeff with steamy tales of their hook-up, Michelle and Jay try to convince Hannah to join them in voting for Mari.

"I need a reason," Hannah whispers, overwhelmed. What's she going to do: Stay true to pal Mari and vote out Figgy — or join Michelle, Jay, Figgy and Taylor, and vote out Mari?

If you thought Hannah was a sweet, harmless geek, think again; she flips sides and casts a vote for Mari. Mari, who is good at video games, is not quite so good at the game of Survivor. She becomes the second player eliminated from the game.