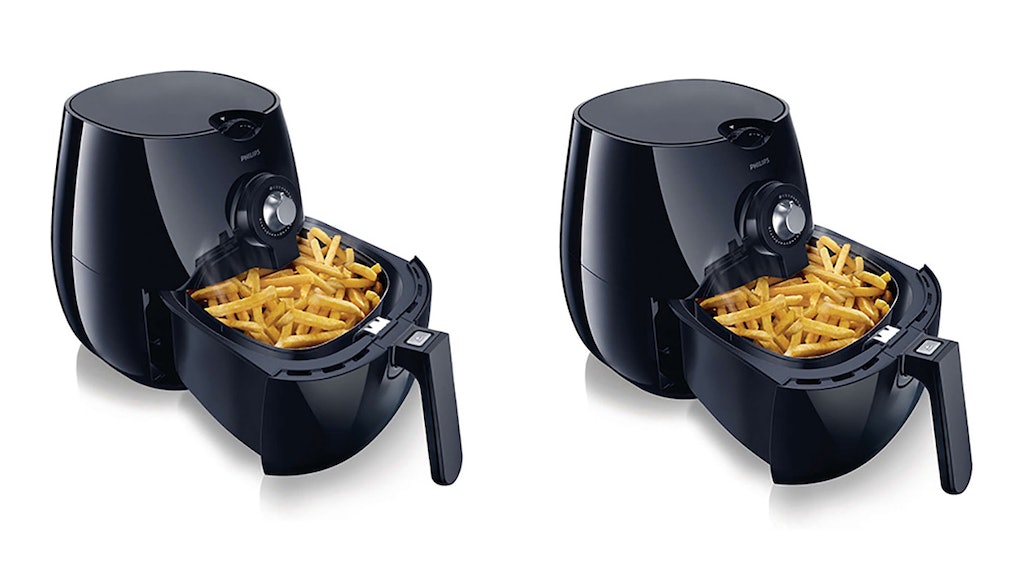 If you've spent any time awake between the hours of midnight and 4 a.m., blankly flipping through TV channels, you've come across an infomercial for an air fryer.

This magical device claims to make fried food more healthful by using air, instead of oil, to crisp the food, reducing the fat content of the dish. It sounds like modern-day sorcery, but for any fan of fried food (everyone), it's practically the holy grail of kitchen appliances.

The air fryer is a relatively modern invention, Caitlin Bart, the senior marketing manager of kitchen appliances at Philips, said in an interview. According to Bart, the Philip's airfryer didn't hit the U.S. market until 2013. Before then, the most similar product on the market was a device called the T-Fal Actifry, which used a mix of oil and air to fry food.

The air fryer has a bit of a cult following — there are even Facebook groups dedicated to them, and Bart says Philips has sold 7 million air fryers globally as of August. These babies are not a cheap investment: The Philips Airfryer, for example, will set consumers back a whopping $299.

So how the hell does an air fryer work, anyway?

Air fryers are similar to deep fryers, but they use air instead of oil to give food a "crispy, crunchy outside and a soft inside," Bart said.

Each air fryer has a heating element at the top of the unit that "forces superheated air down and around the food," Bart explained. The food, which is held in a suspended basket, is encased in highly concentrated, super hot air, which crisps the food quickly without having to immerse the food in oil, she added.

Gadget magazine Gear Patrol likens the air fryer to a mini oven rather than a fryer, noting that "it's a rapid, controlled, efficient convection oven."

So do you need oil?

The concept of frying food without oil seems strange, but Bart said that oil is not required to make most foods when using an air fryer. She recommends adding a little bit of oil to the fryer when making certain dishes, like breaded chicken cutlets, in order to give it a darker, crispier outside.

Bart also said that homemade fries, not frozen ones, need about a tablespoon of oil to get to the right texture. Still, that's a lot less than the eight or so cups other recipes call for to cook homemade fries.

What foods can you fry in it?

You can use an air fryer to make pretty much anything you'd make with a deep fryer, according to Bart. Customers also use the gadget to reheat food quickly, she added. The most popular foods to put in the appliance are definitely fried chicken and french fries, but users have gotten adventurous with the device, Bart said. They've concocted dishes like chocolate lava cakes, brussels sprouts, shrimp and even empanadas in the air fryer.

Another popular favorite? Kale chips. "They come out awesome," Bart said. Air fryer kale chips are apparently a favorite snack of chef Gordon Ramsay's daughter, who is a spokesperson for the Philips product, she said.

Does it take longer than a deep fryer?

Air fryers are on par with deep friers and faster than ovens when it comes to cooking food, Bart said. This is because the air contained inside of the machine is very concentrated, which helps speed up cooking times, she added. The machine takes about three minutes to heat up, which is a lot quicker than heating up oil or setting an oven to preheat, Gear Patrol noted.

So is it actually healthier?

Bart is adamant that using the air fryer is more healthful than conventional frying. Philips compared both homemade french fries and frozen fries in the device and found that in both cases, the air fried food had drastically less fat.

Registered dietitian and spokesperson for the Academy of Nutrition and Dietetics Alissa Rumsey agreed that air fryers are healthier. "They offer a healthy alternative to deep frying, as you end up consume much less oil and calories," she said in an email.

This is good news for people looking to reduce their food's fat content without having to totally give up deep-fried delicacies.

Will we all just use air fryers in the future?

Maybe. Americans have a growing dedication to weight loss and health — the diet industry is worth $20 billion — so tools like this will likely become more popular than they already are.

While air fryers aren't currently commonly found in restaurants, that is likely set to change, Bart said. She's only seen a commercial air fryer at one restaurant (New York City's By Chloe) because the industrial vrsions are incredibly expensive. Bart said she could see other restaurants heading in this direction in the future.

Currently, the biggest complaint about household air fryers is just how loud and big they are. They take up a serious amount of counter space, which is tough if you live in a small house or apartment.

Philips is working on a solution to these inconveniences, and will release a new version of its air fryer in January — one that is more compact but still has the same capacity. That's perfect timing if your New Year's resolution is to eat more fries and mozzarella sticks.