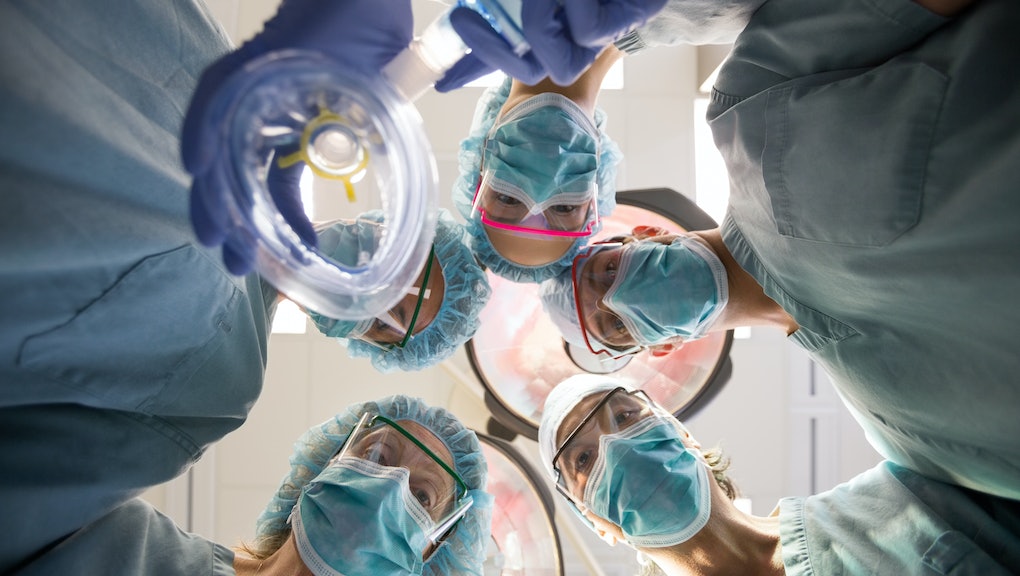 The average annual wage for all workers in the United States is a little more than $48,000. Sure, there are one-off ways to make a little extra money, but if you're in serious need of a raise — and are feeling all sorts of professional ennui?

Your best bet might be going to med school.

Mic crunched the most recent numbers from the Bureau of Labor Statistics and found the 30 highest-paying positions in the United States: More than half are in medicine.

Among the other top-earning jobs, management jobs dominate, according to the 2015 survey data (the most recent available).

Here are the 30 highest-paid positions, ranked by salary in ascending order.

Managing a brand is even more critical given today's social media-centric landscape, and over the past decade many organizations and institutions have professionalized fundraising. That's why this job is not going anywhere. The industry is expected to expand in the next decade — 7% is about as fast as the average for all occupations. But be warned: This is a gig with a tremendous pay range. The lowest 10% earned less than $56,890 a year and the highest 10% earned more than $187,200.

These are folks who plan, direct, or coordinate the operations of public or private sector organizations. They might formulate policies, manage daily operations or plan the use of materials and human resources — but their work is too diverse and general to be classified in any one single area like personnel or purchasing. These jobs tend to be in places with a lot of people, like California, Texas, New York and Illinois, which tend to hire the most operations managers.

Millennials will change jobs four times in their first decade out of college. And compensation and benefit managers will be there at each stop, determining how much cheddar employees take home. Compensation managers plan, develop, and oversee programs to determine how much an organization pays its employees. Benefits managers plan, direct, and coordinate retirement plans, health insurance, and other benefits. Since we'll have more jobs and we'll likely be working later into our lives, these managers are critical to a steady, fluid workforce.

Why be a lawyer chained to your device when you can live the lush life of an academic? Well, with grueling research agendas and fickle faculty tenure decisions, this isn't necessarily the plumb position it once was. And even the above-average growth projected in this field is misleading — since much of the anticipated job growth will be for part-time faculty. Still, law schools aren't going out of business any time soon and law profs, as a group, are the most highly compensated teachers in the country.

After shedding jobs during the Recession, the financial industry is hiring again, though not quite as much as before. Financial managers handle the financial health of an organization. They produce reports, direct investment activities and develop strategies and plans for the long-term financial goals of their organization. While the field anticipates average growth, competition is expected to become fiercer going forward: candidates with advanced degrees will do better.

Becoming a lawyer can still be a winning enterprise, at least for those at the top firms. Though, given the cost of law school and tough job prospects, for the rest it can be an uphill slog. Lawyers advise and represent individuals, businesses, and government agencies on legal issues and disputes. Industry growth will be average over the next decade and competition for jobs will be stiff: law school graduates outnumber new jobs available.

There are some real occupational hazards that come with being a pilot: It is stressful, it's not a beloved industry and it's downright dangerous. But it's getting safer, and the money is good — especially given lower educational requirements for pilots than for other top jobs. Growth is expected to be average, but competition for the plumb posts — flying for major airlines — will be fierce. Low-cost regional airlines and non-scheduled aviation services will provide the most job opportunities.

These folks direct activities related to research and development, and coordinate activities such as testing, quality control, and production. In other words, they oversee the work of scientists, including chemists, physicists, and biologists. You would expect that a buzzy industry that handles R&D and quality control would have strong growth projected. But demand can be affected by shifts in the economy and outside investment, and in the next decade, managers in the natural sciences are expected to see slower than average growth in their field.

Digital marketing alone is a $62 billion industry. Marketing managers estimate the demand for products and services offered by organizations and their competitors. They also develop pricing strategies to help organizations maximize profits while ensuring customers are satisfied. The industry will expand faster in the next 10 years than the average for all occupations. Advertising, promotions, and marketing campaigns will continue to be essential for organizations as they seek to maintain and expand their share of the market, according to the BLS.

The field of computer information systems managers — or IT managers — is expanding much faster than other occupations. There is high demand for IT professionals, who plan, coordinate, and direct computer-related activities in an organization, as firms increasingly expand their business to digital platforms.

Drill, baby, drill! Or not. It depends on oil prices. The whole industry does, which is why some petroleum engineers can't get jobs. Petroleum engineers design and develop methods for extracting oil and gas from deposits below the Earth's surface. Job growth is expected to be faster than for other occupations over the next 10 years. But oil prices are key as higher prices lead to increasing complexity of oil companies' operations, more engineers may be required for each drilling operation.

Nurse anesthetists are the highest-paid of all advanced practice registered nurses, which include nurse midwives and nurse practitioners. These registered nurses, with advance graduate education, administer anesthesia, monitor patient's vital signs, and oversee patient recovery from anesthesia. They also assist anesthesiologists, surgeons, other physicians or dentists. There is huge growth expected in this field because of the increased emphasis on preventive care and growing health care demand from Baby Boomers.

Somebody has to keep Hollywood in veneered smiles. In addition to cosmetic dental enhancements like veneers, prosthodontists construct oral prostheses to replace missing teeth and other oral structures for the mouth and jaw. This field is projected to see much faster-than-average growth: The demand for dental services will increase as the population ages, cosmetic dental services become increasingly popular, and access to health insurance keeps growing, according to the BLS.

Dental specialists focus on an area beyond general dentistry, such as pediatric dentistry. Just as with prosthodontists, the industry will benefit from growing demand.

As with specialists, the field for traditional dentists is projected to grow much faster than the average for all occupations.

The American Academy of Pediatrics says there is a shortage of pediatricians — physicians who diagnose, treat and help prevent children's diseases and injuries — particularly in some subspecialties and in rural areas. Growth in this field is expected to be robust, according to BLS.

We've all read about CEOs whose pay greatly exceeds the $185,000 average here. But there are plenty of CEOs who lead their organizations without making millions. They are leaders who determine and formulate policies and provide overall direction of companies. They plan, direct or coordinate operational activities at the highest level of management with the help of subordinate executives and staff managers, according to the BLS.

Family doctors do pretty well, even as nurse practitioners squeeze in from one side and specialists from the other. General practitioners — physicians who diagnose, treat and help prevent diseases and injuries that commonly occur in the general population — may refer patients to specialists when needed for further diagnosis or treatment. But this field, like most of medicine, will see fast growth in the next decade, BLS projected.

Psychiatrists are physicians who diagnose, treat and help prevent disorders of the mind. More people use medications to treat psychological and behavioral disorders today than ever before: more than one in five adults now uses medicines prescribed by psychiatrists to address issues like anxiety and depression. So this job isn't going anywhere.

These doctors diagnose and provide nonsurgical treatments for diseases and injuries of internal organ systems. Strong job growth is projected, according to BLS, as demand for health care services ramps up with the aging population.

Highest-paying job #6: Physician (all other)

These physicians are those who work outside the classic "doctor" job. They may work in research or at medical schools. They may work in government or laboratories or even private industry. While the position likely involves more research or policy-making than medical practice, these physicians may also examine patients, take medical histories, prescribe medications and perform and interpret diagnostic tests, according to BLS.

Orthodontists, who receive specialized education following dental school to examine, diagnose and treat specific dental issues and oral cavity anomalies. They put you in braces — and not just for teenagers anymore — and fabricate appliances to realign teeth and jaws.

These physicians provide medical care related to pregnancy or childbirth, as well as diagnose, treat and help prevent women's diseases, particularly those affecting the reproductive system. Over the last 15 years, this field has shifted from being male-dominated to female-dominated.

Want to perform surgeries on the face, mouth and jaw? You will be paid well, but not without effort. Requiring at least four years of additional surgery training, oral surgeons treat facial traumas, fix cleft lips and even diagnose and treat patients with head, neck and oral cancer.

Patients are growing savvier about the importance of a good surgeon. These health care professionals — who treat diseases and injuries by invasive, minimally invasive or noninvasive surgical methods — are in high demand.

Often compared with airplane pilots, anesthesiologists thread a delicate needle — administering anesthesia prior to, during or after surgeries and other medical procedures. Despite reports suggesting robots could perform better than humans, many in the medical field still contend that anesthesiologists are not going anywhere. And, as with all medical professions, significant job growth is expected in the next decade, according to BLS.