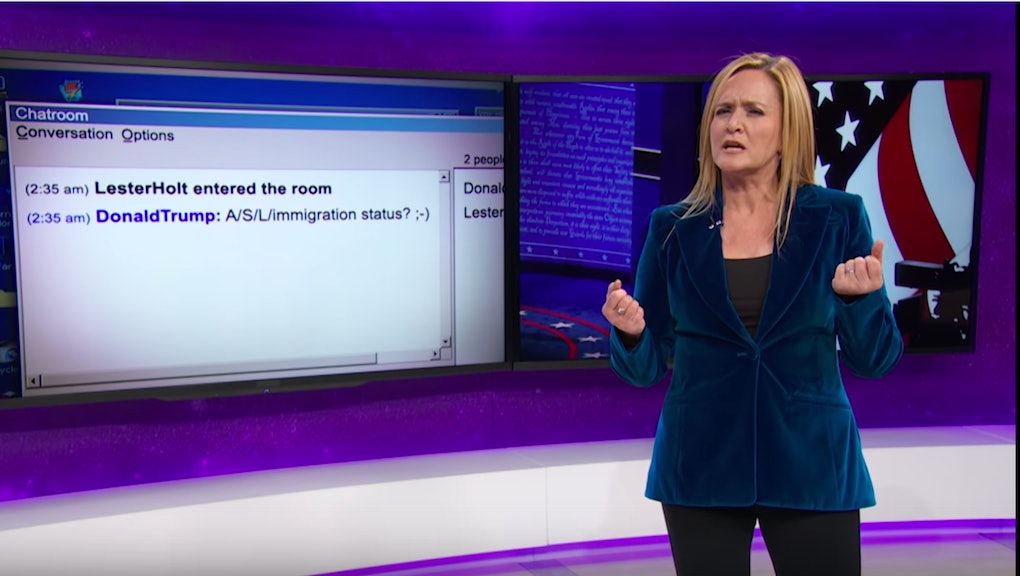 A Wednesday night airtime — instead of the typical Monday — gave Samantha Bee plenty of time to break down the first presidential debate on Full Frontal, and the late-night host didn't disappoint. Stressing the importance of this year's election, Bee noted that even the NFL's Monday Night Football matchup was skipped by the majority of Americans in favor of the debate.

"For once, concussion-ball was not as compelling as watching American democracy play Russian roulette," she says.

But while Donald Trump was steady in the opening portion of the debate — or as Bee put it, Trump campaign manager Kellyanne Conway's "control collar worked for about 20 minutes" — he fell into Hillary Clinton's trap by succumbing to his sexist tendencies.

"Trump warned us that Hermione Clinton would be cheating by doing something called 'preparing,'" Bee said. "But Trump never considered the possibility that she might be a Count of Monte Cristo overplanner. She spent months building an elaborate trap for Trump, and he lumbered right into it."

That was when Trump doubled down on his remarks about former Miss Universe winner Alicia Machado on the Fox program — who, Clinton noted, he called "Miss Piggy." On Fox, he said that she "gained a massive amount of weight and it was a real problem," to which Bee laid out a scathing rebuttal with the help of her staff.

"No, you had a stunningly beautiful Miss Universe winner, but you treated her like garbage — now you have a real problem," Bee says. "Not only with her, but with any woman who's ever been called fat, which is all of us. We've been dealing with you our whole life."

Watch Bee's segments on the presidential debate below.