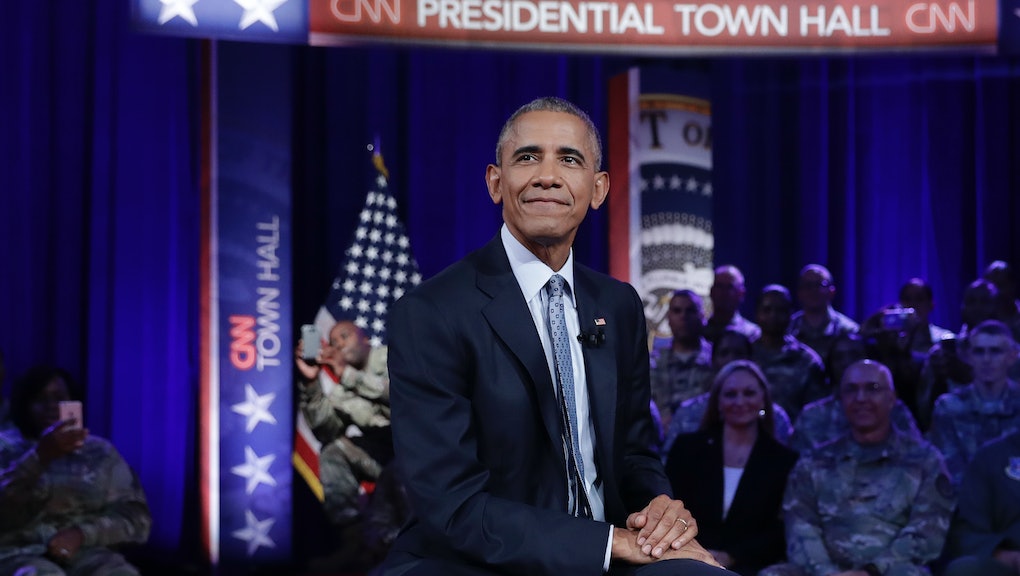 Wednesday night, during a CNN Town Hall interview with Jake Tapper, President Barack Obama defended his decision to avoid the term "radical Islamic terrorism" — a choice he's had to explain more than a few times during his time in office.

"I've said repeatedly that where we see terrorist organizations like Al Qaeda or ISIL, they have perverted and distorted and tried to claim the mantle of Islam for an excuse, for basically barbarism and death," Obama said.

He added, "These are people who kill children, kill Muslims, take sex slaves. There's no religious rationale that would justify in any way any of the things that they do."

Republican nominee Donald Trump is among those who have criticized Obama for not using the term. Following the July attack in Nice, France, Trump said it was high time for Obama to call attacks from ISIS "radical Islamic terrorism," saying the president would never be able to tackle terrorism without "defining it."

"People would sigh with relief if he would say it, but he doesn't want to say it," Trump said at the time.

But Wednesday night, Obama said he's always been careful with his words when it comes to speaking about terrorism — because words matter.

Obama said it's dangerous when "a president or people aspiring to become president get loose with this language." How we talk about Islam, he said, has a real impact on the lives of Muslims in the United States.

Robert McCaw, government affairs manager at the Council on American-Islamic Relations, said in a phone interview Thursday that "lack of exposure to Muslims and being barraged with increased levels of anti-Muslim rhetoric being mainstreamed by politicians like Trump has led to 2016 being the one worst year of anti-Muslim violence in American history."

He said he commends Obama for being careful with his language, noting that what groups like ISIS crave most is "religious legitimacy;" in other words, the use of terms like "radical Islamic terrorism" only serves to validate their cause.

What's more, McCaw said he believes those who've put pressure on Obama have their own agenda.

"I believe a number of far right conservatives share the same goal as criminal groups like ISIS — they want to see a war between Islam and the West," said McCaw. "What they fail to realize is Islamic life and Muslims are a part of the West and that our communities safely bridge this gap."