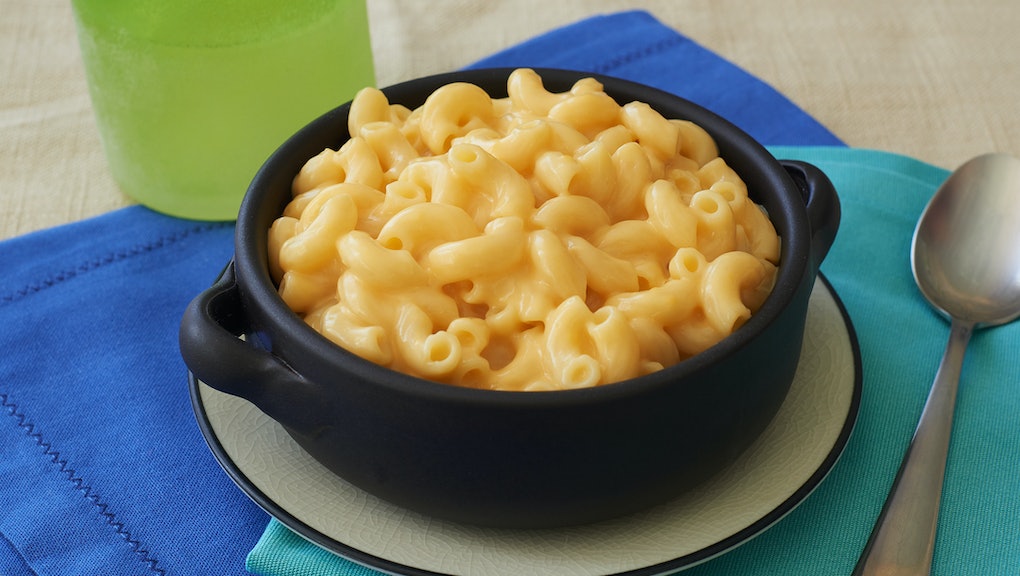 There's a new mac and cheese in town, and it'll serve your late night and your 7-year-old niece's cravings for all things coated in cheese, but this new mac is not the packaged noodle dish you're used to.

This box of goodness is changing everything we previously accepted about packaged mac: no cheese dust, no gooey orange gloop and absolutely no freezer trays in this box that makes a gooey bowl of cheddar-coated elbow noodles. Mac-topia has arrived.

Three Bridges, a family-owned San Francisco-based company, has been purveying refrigerated ravioli, pasta and sauces since 2014, but is now ready to disrupt the mac and cheese market with a product previously unseen. It's mac and cheese that's not frozen, not dehydrated and rBST free (which means the cows producing the dairy aren't injected with hormones) — it uses entirely clean ingredients and takes less than thee minutes to prepare.

The shelf life for the refrigerated mac and cheese is 30 days, which is a bit shorter than the box of Velveeta that's been sitting in your pantry since 2015, but maybe that's a good thing.

Should cheese really be confined to a room temperature foil packet? This is the first not-frozen mac and cheese product on the market to use real cheese (Velveeta and the like are "cheese products"), which actually seems pretty wild, but it's true.

"We set out to innovate a mac and cheese meal kit because we realized consumers are hungry for a mac and cheese that's convenient and easy to make, but isn't made from the mystery 'cheese dust' that's too often found in boxed mac and cheese products that are currently on shelves today," chef Craig Schauffel, vice president of Research and Culinary Innovation at Three Bridges, said in an email.

The preservative-free, artificial ingredient-free and filler-free mac and cheese is made with freshly grated cheddar cheese, to be stirred into milk heated on the stovetop (or microwave if you're stove-averse) and mixed in with partially cooked homemade macaroni noodles. That's it — no colander required. "Our mac and cheese meal kit is a simple, honest and better-for-you take on an age-old comfort food," Schauffel said.

Nutritionally, one cup of serving of Three Bridges' mac and cheese beats out its competitors:

Taste-wise, Three Bridges' Mac Creamy Cheddar Mac and Cheese is everything you'd hope for it to be and more. That is, it has a decadent, cheddar-y taste only previously found in macs made from scratch or served in restaurants -- there's none of that faux cheese flavor and each noodle is satisfyingly coated in a sticky cheese jacket. The consistency is perfect and a bowl of this mac could easily pass for a top-secret homemade recipe, if you hide evidence of the box. It's savory, not too salty and not at all soupy like some other boxed mac and cheeses. It shouldn't be possible to make mac and cheese this good in just a few minutes, but it is, and we've converted to the new stuff.

While it doesn't taste like the powdered fake cheese you're used to (maybe that's a good thing), you may feel comfort in knowing that a healthier option is available. And, hey, maybe you'll even see how it tastes better than the highly preserved junk we've become accustomed to.