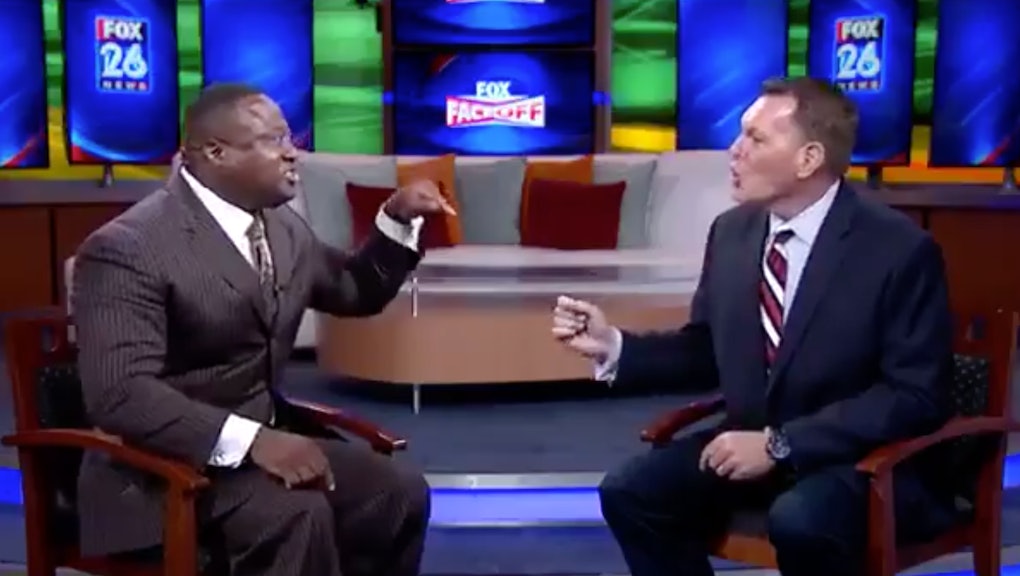 Sometimes, you can agree to disagree. Sometimes, you can't. When it comes to standing for the United States' pledge of allegiance, black activist Quanell X and white TV host Matt Patrick can't.

During a September 19 debate on Face Off — a recurring segment on Houston's Fox 26 — X and Patrick, the program's host, addressed the case of 10-year-old Skyla Madria. Madria, a fifth-grader, sparked controversy earlier this month when she kneeled during the pledge at Alexander Middle School in Pearland, Texas.

Patrick then questioned whether Madria spoke to her parents about her protest. He made the point that U.S. troops have made major sacrifices for her freedom.

Unfortunately for Patrick, X had receipts. X pointed out that Madria's father is a retired military veteran and that she and her mother had conversations about the decision. Also, Madria's school required Madria to obtain written consent from her mother.

When X then began to explain the lesser-known racist verses of the "Star Spangled Banner," which makes references to slaves and the "gloom of the grave," Patrick interrupted him.

"America looked the same way at Rosa Parks when she refused to give up her seat to a white man on the bus, but history vindicated her." — Quannell X

"What white people need to understand —," X began, not yet having made his point.

Patrick then claimed to be concerned about the Madria's welfare — which missed entirely that the well-being of black people was what Madria was protesting for in the first place.

X argued that, at the end of the day, history will vindicate Madria and others who've taken a knee during the U.S. national anthem in recent months.

Similar protests have taken the American conscience by storm, ever since San Francisco 49ers quarterback Colin Kaepernick sat during the national anthem at a pre-season NFL game in August — a protest that has since been duplicated by numerous other athletes.

"America looked the same way at Rosa Parks when she refused to give up her seat to a white man on the bus, but history vindicated her," X said.

Patrick continued to argue that Madria's actions disrespected U.S. military veterans — even though a number of veterans have expressed solidarity with Kaepernick and his protest.

X argued, conversely, that black veterans have historically felt disrespected by the very country they fought for.

"Ask the black men and women who served America in its military, like in the independence war, we helped America get it and we were still slaves afterward," X said. "We have fought in America's wars and we've never been given the justice and the due process of everybody else in this nation."

In a final Donald Trump-esque attempt to shout his way to victory in the argument, Patrick said black people who are unhappy should "move to a different country."

X reminded Patrick that white settlers were not the country's original inhabitants, and that, if we asked Native Americans who should leave today, it would likely not be black people.

"Let the Indians decide who should go and I guarantee you black folks will stay and you'll all be on the first damn boat leaving here," X said.

You can watch the full exchange below: