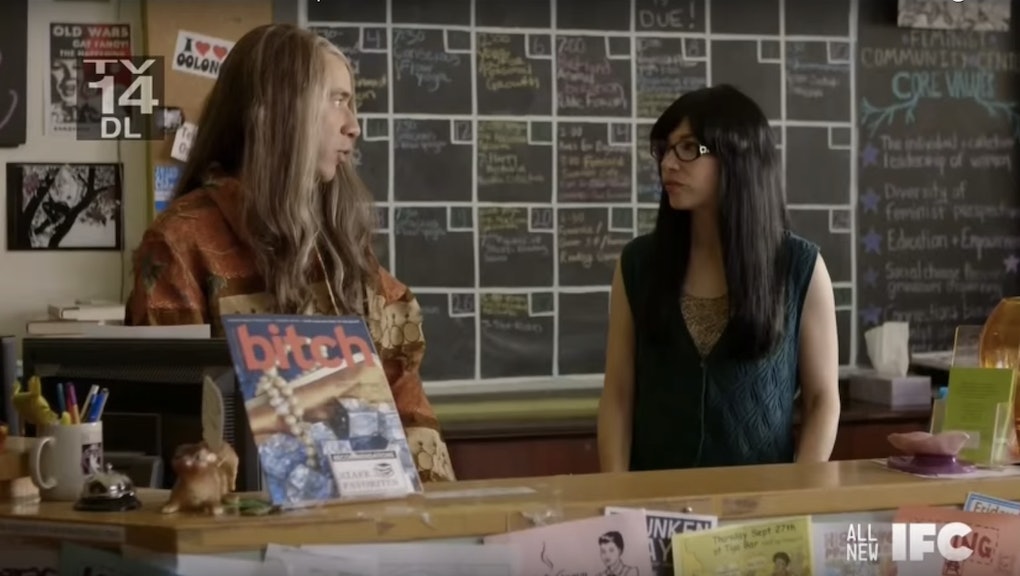 In Other Words is a feminist bookstore in Portland, Oregon. But fans of the sketch comedy series Portlandia probably know it better as "Women and Women First," the backdrop for the antics of characters Tony  and Candace.

While things are always frothy and tongue-in-cheek on the show, the bookstore's real-life staff detailed some serious tensions behind-the-scenes that led them to end their relationship with Portlandia seven months ago.

The bookstore's staff published a blog post on the store's site Wednesday titled "Fuck You, Portlandia" listing their grievances with the show, which ranged from inconveniences and mistreatment to the show's content itself. Overall, the staff of In Other Words wrote, Portlandia has had a "net negative effect" on not just the bookstore, but on the entire city.

"This was a direct response to a particular egregious filming of the show in our space, which saw our store left a mess, our staff mistreated, our neighbors forced to close and lose business for a day without warning and our repeated attempts to obtain accountability or resolution dismissed," the post read.

"It was also a direct response to a show which is in every way diametrically opposed to our politics and the vision of society we're organizing to realize."

The staff zeroed in on Portlandia's problems with diversity and representation, knocking the show for its portrayal of Candace — the fictional co-owner of Women and Women first, played by Fred Armisen — and for its lack of people of color featured on screen.

"'LOL Fred Armisen in a wig and a dress' is a deeply shitty joke whose sole punchline throws trans femmes under the bus by holding up their gender presentation for mockery and ridicule," the post read, which called the Women and Women First segments "trans-antagonistic and transmisogynistic."

What's more, the dearth of black people featured on the show, they wrote, continues to have impact on real people of color living in Portland. They detailed to an example in which Portlandia's production crew apparently asked that the staff of In Other Words to remove a "Black Lives Matter" sign from their window before filming.

"We refused," the blog post read. "Black Lives Matter Portland meets regularly in our space. But as more and more black folks and people of color have become involved at In Other Words, Portlandia has only gotten steadfastly more white."

The staff added that, in many of its segments, Portlandia continually jokes about gentrification — an issue they say has only been made worse since the show premiered in 2011. "Portlandia is fueling mass displacement in Portland," they wrote.

Mic has reached out to IFC and will update this story if we hear back.