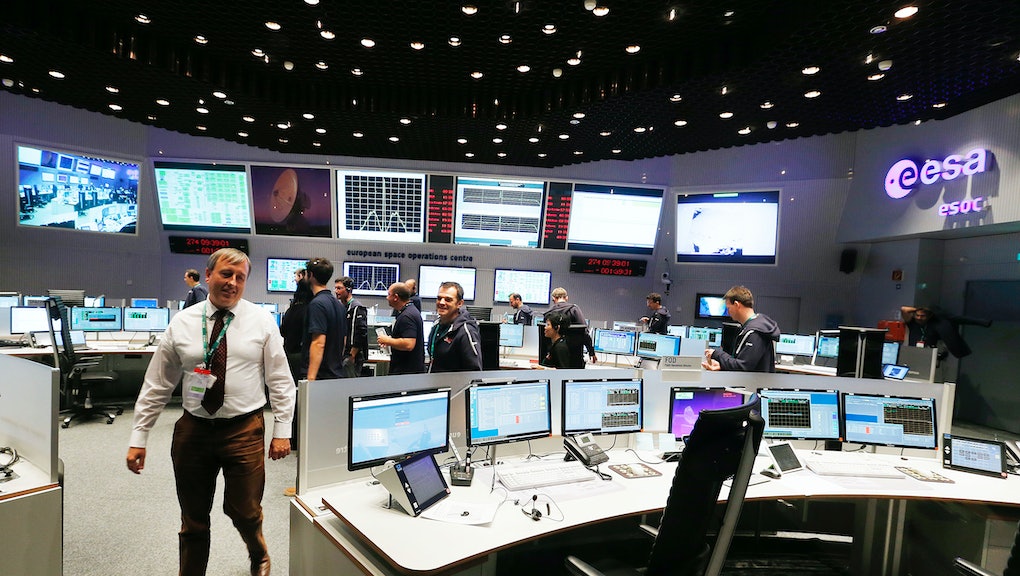 On Friday morning, the European Space Agency's Rosetta probe, the first-ever spacecraft to orbit a comet, ceased sending signals home. It was 7:19 a.m. Eastern — 40 minutes after the probe landed (or crashed) on the surface of Comet 67P — when the signals stopped, ending its two-year mission. The final descent was the last leg of a 12-year endeavor.

At mission control in Darmstadt, Germany, there was silence, followed by applause, joy and smiles. The landing happened at about two miles per hour, or an incredibly slow walking speed.

"I can announce full success of this historic descent of Rosetta towards Comet 67P," said European Space Agency mission manager Patrick Martin, according to the BBC. "Farewell Rosetta; you've done the job. That was space science at its best."

Comet 67P was targeted because its orbit could be met by Rosetta, according to the Times. Scientists learned much about the comet over the two-year mission, including that its rubber duck shape likely occurred when two comets collided, becoming a single body. The interior of the comet may have been a "very flurry material" similar to snow, according to Valerie Ciarlettie, who investigated the comet's guts using radio waves.

The ESA uploaded Rosetta's final images during its last moments of life. Here are the images, starting from about 12 miles from the surface, then descending:

It's been a long journey for the probe, and there probably won't be another mission that captures photos — or an abundance of new cosmic data — like these for a while. Earth bids Rosetta farewell after a job well done.