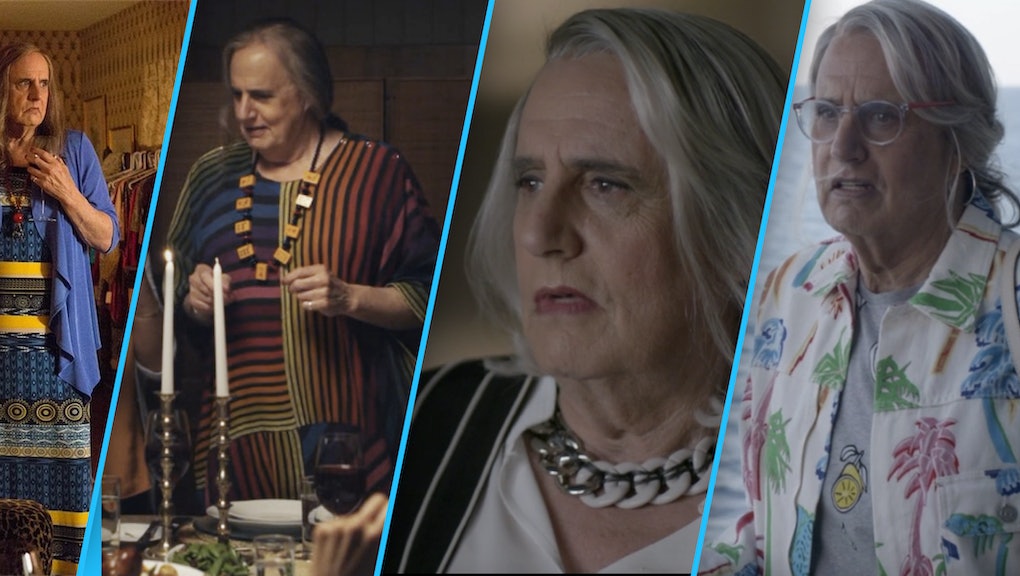 In seasons past, Transparent's lead character, Maura Pfefferman, has maintained a look largely comprised of caftans and statement neckpieces.

Portrayed by Emmy award winner Jeffrey Tambor, Maura, who is a newly out transgender woman, wore little makeup with her hair often in long, messy twirls.

For two seasons, her style was that of a funky art teacher based in Portland.

But during the show's third season, which debuted on Amazon Prime on Sept. 23, Maura got a makeover.

Or, rather, she gave herself a makeover.

In the third episode of the third season, Maura appears with a svelte silver bob (not unlike her ex-wife's) and an entirely new wardrobe of sleek basics and flattering silhouettes.

"It was a California Earth mother look," Transparent's costume designer, Marie Schley, said in an interview. "I see her now in a more of an urbane, polished, monochromatic, more refined, high feminine look."

Maura went from looking like a woman at the helm of her own community garden to looking more like Joan Didion. And according to Schley, Maura's makeover is about far more than just her wanting to change up her look. It's about showing a truthful account of what it's like as a transgender woman trying to navigate fashion, and find a look that feels good.

"In that first episode, she says, 'I have everything I've ever wanted. I have a partner. I've transitioned, but why aren't I happy?'" Schley, who's been designing for more than 20 years, said. "And I think she is exploring that possibility that this makeover is something that that could help her happiness. To see if that's what's missing from her life."

In a day and age when society polices the appearance of transgender women — often violently — Maura's makeover's intentions matter. Maura, like the millions of transgender individuals out there, is trying to find and express who she is and how that manifests through her presentation.

"It's really about being an individual and not conforming to an idea to what femininity is," Schley said. "And just owning it for herself."

Maura is not trying to emulate Caitlyn Jenner, for example. She is just concerned with being Maura.

"She's a whole person. She's not just trans," Schley said. "She was a professor. She has a certain degree of intellect. She's Jewish. All of those things factored into how she dressed."

And in going through this makeover this season, Schley says that Maura is showing people that women like Maura don't immediately just transition and present themselves as the women who they have always been. Rather, it's a constant evolution.

"Maura evolves and her idea of femininity begins to evolve," Schley said. "This is just her trying to see if this particular look makes her happy and feel comfortable."

Over the course of designing for the show, Schley says that she's been tuned in to just how much clothing can affect one's perceived gender, and how linked clothing and gender really are. She's also seen a huge shift in how fashion has become more accommodating to people who maybe don't want to dress according to strict gender rules.

"As a designer, you begin to look at how clothing is such a building block for gender," Schley said. "Now, men are wearing women's clothing and women are wearing men's clothing. There won't be those barriers. We're already moving towards that. People want to be able to pick who they are. Things are going to get easier for Maura because of that."

But this season, Schley made a lot of the clothes for Maura, because much of the women's clothing she found didn't immediately fit Maura without alterations.

"We didn't have a lot of options in bigger women's sizes," Schley said. "She does a lot of monochromatic looks that are tonal and we couldn't find a lot of what we needed out there. We tried to do something completely different and give her more of an hourglass shape this season too."

But if you've watched up to the end of this season, (warning: spoilers) you probably noticed that Maura's style evolution didn't end with her still being thrilled with this new highly feminine look due to her inability to get transition-related healthcare.

In the season finale, she waltzes into a shop, points to a more athletic-looking  tropical pantsuit and asks an employee, "Is this for men or for women?" When the employee answers that it could be for both, she's interested.

And so, Maura's style evolution and quest to find something that works for her continues. In the show's next season, Schley says that we should expect her to explore a "new place of androgyny," since she's now found out that hyper femininity doesn't feel exactly right on her either.

What Maura's style evolution helps normalize is the idea that for her and many women like her, dressing the most feminine in order to "pass" as a woman isn't the goal. The goal is happiness, and feeling comfortable as the person you are. Also, all those rules about what gender should wear which clothes don't mean a thing.