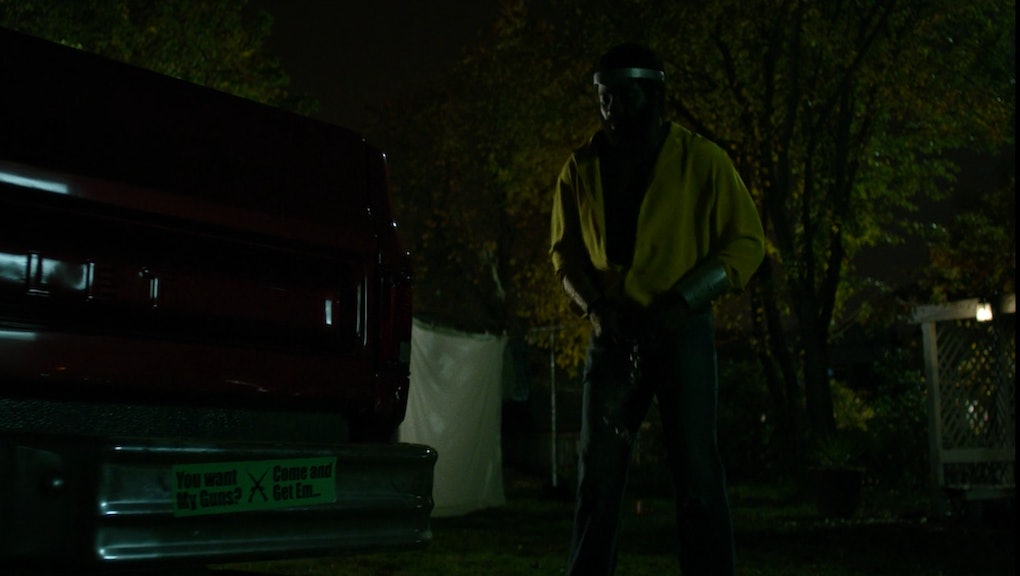 In the tradition of Netflix's Marvel series keeping its storylines as realistic as possible for superhero-centric television, the newly released Luke Cage doesn't have its titular character sport his original costume from the comic books.

(Editor's note: Spoilers for the first four episodes of Luke Cage ahead).

After all, Cage — who was conceived in the '70s — would feel out of place in modern-day Harlem with his Power Man outfit: a silky yellow shirt, a chain belt, blue spandex pants and a metallic head brace and wristbands.

Instead, Cage (played by Mike Colter) has a subtler nod to the character's roots, as the inside of the black hoodie he wears is yellow. But the show had a clever tie-in to the character's original look in its fourth episode, in which viewers learn about the origin of Cage's superpowers.

While Cage is locked up in Seagate Prison — basically, a Marvel equivalent to Alcatraz based in Georgia — he is beaten to a pulp by two inmates after word gets out that he wants to leave the illegal fighting ring one of the prison guards operates. In a last-ditch effort to save his life at the facility, he undergoes an experimental medical procedure that would seemingly help heal his wounds (this is when he's given a head brace and wristbands).

The procedure takes a wrong turn, however, when the guard attempts to intervene, and the subsequent meddling causes the tank to explode, killing the guard and leaving Cage with his newfound powers.

With his super-strength, he's able to punch his way through the prison walls and swims ashore. Then, when he makes it to land, he snatches a yellow shirt and blue jeans from a clothesline with a makeshift belt. Just like that, he bears a strong likeness to his original outfit — but once he sees himself in the reflection of a car, he's less than impressed.

"You look like a damn fool," he tells himself.

Fans on Twitter took note of the clever Easter egg, too.

Luke Cage is currently streaming in its entirety on Netflix.