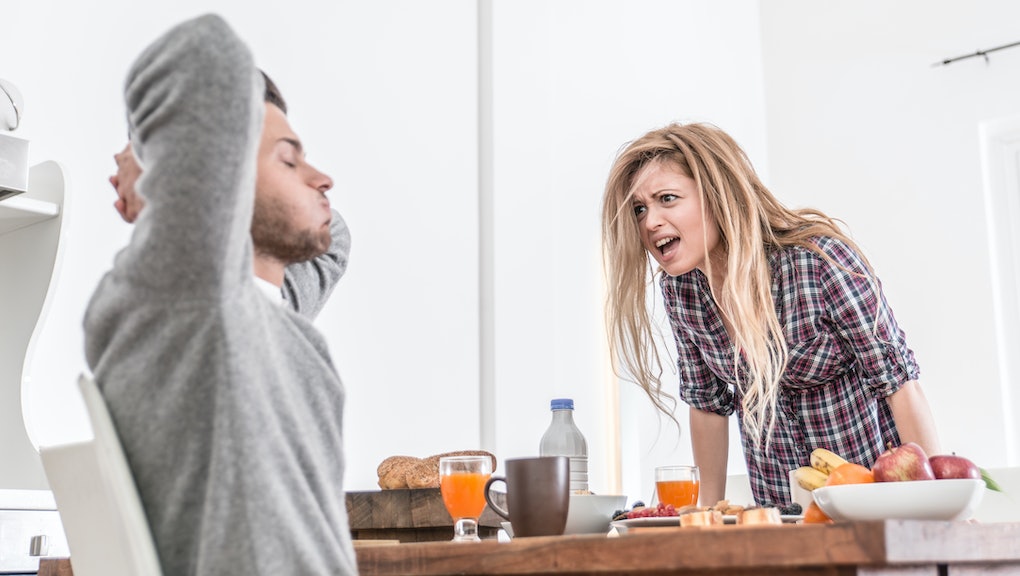 Stop fighting over money: Here's how couples can avoid conflict and sync budgets

Ugh! Maybe she didn't pay a bill she said she would. Or maybe he consistently spends more than what you've agreed.

Fights about money suck. In fact, studies have shown that fights over finances are a leading predictor of divorce.

But, ask a financial therapist — an expert who specializes in helping people navigate the complex interplay between money, emotions, and relationships — and they'll tell you: money is just a scapegoat.

"Plainly, money is a loaded topic," financial therapist Megan Ford said in an interview with Mic. "It's just about the numbers, right? Wrong!"

Conflict is rarely just about dollars and cents, Ford said, and is often more about power, trust, communication or organization.

None of these problems alone must automatically doom a relationship. But navigating your way out of the wicked woods will depend on how well you deal with the true sources of conflict.

Luckily, you have help. Here's our "stop fighting" plan:

In therapist Ford's practice at the University of Georgia, she often sees couples bickering over details: spending and saving tendencies, or the division of financial tasks.

"But less often do they see how these things are connected to more core values, beliefs, and emotions," she said, "which drive these money beliefs and behaviors."

Openness and trust are often the real problems: Will you do what you say you'll do? Are you being honest with how your spend your money? Are you honest with yourself, let alone your significant other?

In fact, one in five millennials said they'd break up with their partner over a financial secret, according to a study by TDAmeritrade. But, the same percentage is likely to have a secret and of the latter group, 15% said there was no way they would spill the beans.

The top secrets for all generations, according to the study? Try a secret bank account, steep credit card debt or a bad credit score.

Now, even if your conflicts don't involve outright dishonesty, there's a case for increasing accountability and transparency. It's harder to fight when everyone can agree on the facts of, say, who spent what and when.

Consider downloading a financial app as an impartial referee. If there is ever a conflict, you and your partner can take a time-out — and turn to the app for a replay of the spending.

Some apps, like Mint or Level Money connect directly to your accounts and can automatically give you a snapshot in realtime of how much you're spending on groceries, bills or entertainment. If that creeps you out, you can manually input your own spending on apps like Splitwise or Goodbudget — but then there's more onus on the players to be candid and prompt.

You hardly ever eat out, you tell your boyfriend, when he questions where the money is going. You can't even remember the last time you sat down at a restaurant. But go to the app: Then you may be reminded of the Seamless you ordered last week — and the Starbucks you grabbed before work.

Starbucks costs money, too, and might otherwise be forgotten without a ref in the room.

The myth that talking about money is "impolite," "taboo," and "not in good taste" gets in the way of healthy communication, Ford said.

Young people are on the right track in some ways. Seven in ten millennials say they believe discussing money and finances is imperative, according to the TDAmeritrade study.

The key to making sure your conversations are actually effective is creating a "routine" for money talk.

Ford recommends establishing a regular, calm, clear time to sit down with your partner and discuss the money matters impacting your life together — both the positives and the problem areas.

Nothing will derail date night faster than, "How much did you pay for those shoes?" And getting out the door in the morning rush is not the time to bring up your beloved's parking ticket fines. Much better to agree ahead of time that the first Sunday of the month, say, is a standing "money talk" date.

From there, make decisions together, create shared goals and consult an expert if you're need more technical advice. And go into the conversation mindful of your own biases, Ford said.

Before you can expect a partner to understand where you're coming from financially — and why you must have that subscription to HBO — you need to be able to explain it to yourself in the mirror. If it still seems laughable to you, chances are it will be side-splitting to your significant other.

Conversely, even your partner's needs or wants may seem silly or irrational to you, part of being in a healthy partnership is trying to better understand your significant other, Ford said.

Before you jump to conclusions, reflect and ask yourself "why" your partner might think or feel the way a certain way about money. Maybe it is what they learned growing up — or maybe it's a coping mechanism adopted during a difficult financial time.

Whatever the case, focus on understanding and empathizing before you pick a fight.

The so-called golden rule of finance is to spend less than you earn.

But one in four Americans don't always pay bills on time, according to the NFCC's 2015 Financial Literacy Survey. Among millennials, just over half are regularly paying bills on time and have no accounts in collection.

Disorganization is one culprit for rocky finances: Missed payments can result in late fees, ding your credit or even raise the interest rate on your credit card.

If you're managing money as a team, that's another case for using a financial app. Your money tracker will represent a step toward better communication and less "I thought you paid that!" frustration.

But to really own your finances — and keep the fights at bay — you need to go beyond a single app, and create a "system" or plan.

Typically this means maintaining a to do list and budget — or combination budget-and-to-do-list — in a binder or spreadsheet, and there's no shortage of examples and inspiration online.

If you and your partner are managing money together, be sure to communicate ahead of time about sharing responsibility for the budget. The last thing you want is more stuff to argue about.

So you've set up accountability measures and established a recurring "money talk" — and you're still butting heads. Sigh.

An overwhelming majority of couples, 73%, say that their money management style differs from their partners, according to a study by Ameriprise Financial.

"Money talk comes with feelings, past experiences, beliefs, and more all tangled up together, and that's just individually," said Ford. "When you're discussing couples and finances, you've got two sets of these beliefs, backgrounds, and baggage to navigate."

You may need to have a frank talk with your partner:  Do you both have access to a joint account? Who controls money decisions? How does it all make you feel?

Having a plan and, crucially, being transparent with one another when something you've planned is no longer working helps prevent conflicts. For example, decide early on how you will divide and pay bills, track spending or manage day-to-day financial responsibilities. And be easy on yourself if that still doesn't work.

"Money, for some couples, can be a consistent and perpetual area of conflict throughout the relationship and there may not always be a way to see eye-to-eye completely," said Ford.

That's okay. If you find yourselves at the breaking point with this issue, seek help from someone like a financial therapist who will be more equipped to handle both the money and the relationship elements at play.

And, if all else fails, remember there are no rules: If you and your boo want to simplify life by keeping all your money separate, that's okay, too.