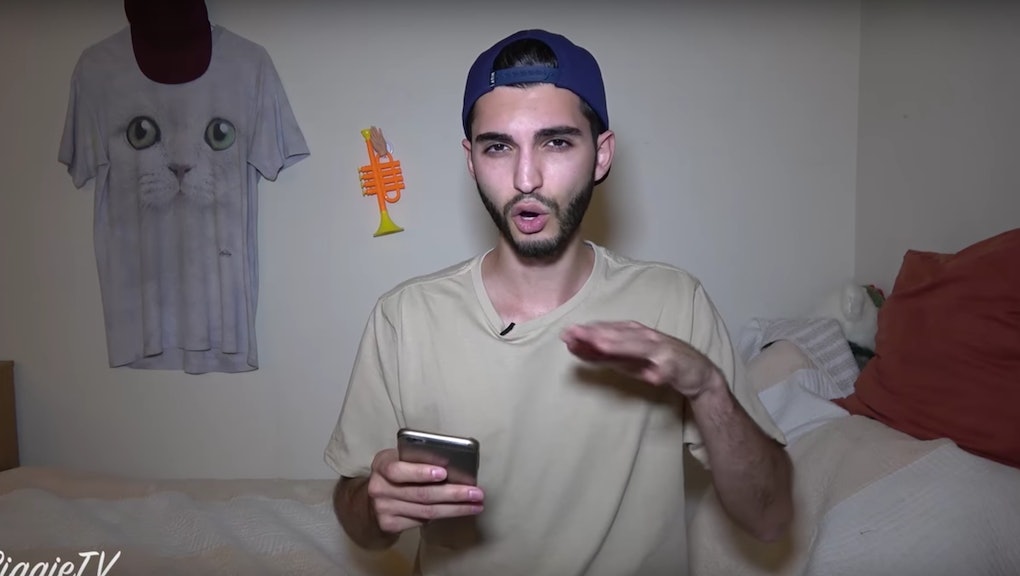 Taping down all your coworker's office supplies? Prank. Making fun of your gay friend on camera while flirting with them via text? Not a prank.

YouTube star NoBiggie, who regularly pranks people by texting them song lyrics, raised a lot of eyebrows after publishing a video on Aug. 28 in which he pranks his gay friend by texting him lyrics to the song "Closer" by the Chainsmokers.

While that sounds innocent enough, during the video, NoBiggie makes disparaging remarks about gay men and even dry heaves a couple of times after his gay friend flirts with him — even though he initiated the conversation.

First, NoBiggie says he met this guy at a YouTube conference.

"I could tell this guy was low-key trying to always hit on me, bro," he says.

NoBiggie then goes on to describe the two types — yes, only two — of gay men:

Now, speaking from all the gays I've met, there's two types of gay dudes, okay? There's the one type of gay dude who's like super cool, super chill, like someone you could actually be good friends with. They'll never try to hit on you, and they're always just like super chill, cool people, man.

NoBiggie doesn't seem to get the irony of a lot of his statements: he calls out gay men for having an ego and always hitting on him as he's making a YouTube video in which he baits a gay man into flirting with him and then shoots him down publicly like a schoolyard bully.

NoBiggie starts texting his friend the Chainsmokers lyrics and intersperses the texts with reaction shots from him, most of which are grossed out by the guy's advances — even though, once again, he initiated the flirting.

When his friend sends him a kiss emoji, NoBiggie seems disturbed and calls it a "lipstick emoji."

When NoBiggie sends the lyric "So baby pull me closer in the backseat of your rover," the man he's texting responds to the message appropriately and asks if the wants to hook up and sends a tongue emoji.

After NoBiggie sends the more suggestive lyrics, "Bite that tattoo on your shoulder," and gets a suggestive response in return, he pretends to vomit.

NoBiggie then scolds his friend for giving into his flirty texts.

"Dude, this was all just a prank. I told you I was straight multiple times and you still send texts like this?" he asks.

Funny, he knew his friend was gay and he still sent him multiple suggestive texts.

NoBiggie said he had to stop texting the guy because the imagery was "getting way too fucking gross."

People in the comments section do not appreciate NoBiggie's homophobia.

"You're just so fucking horrible. Flirting with someone and you got disgusted? Just erase the video," a commenter said.

"Dude, could you like, not be so insulting towards the gays? They're just like straight people, jfc you don't have to put them in categories," another person said.

NoBiggie's video demeans gay people in several ways in the span of only a few minutes — he says that gays fall into only two types, that they're all trying to hit on him and then he publicly shames a gay man for responding to his flirty texts.

Guess it's true what they say about homophobia: it's really the fear of straight men being objectified by gay men the way straight men objectify women.