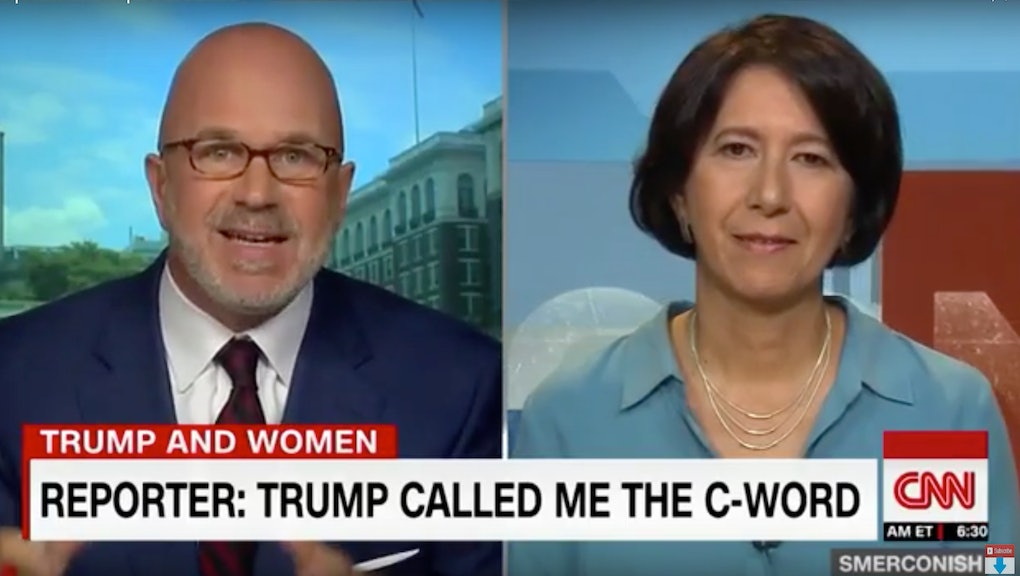 The scariest words in the English language may now be "Hold for Mr. Trump."

Appearing on CNN's Smerconish on Saturday morning, former Philadelphia Inquirer reporter Jennifer Lin told host Michael Smerconish about the time Republican presidential nominee Donald Trump called her a "c*nt" to her boss after she wrote a story about his Atlantic City business dealings in 1988 for the Inquirer.

"The woman said 'Hold for Mr. Trump' and then Mr. Trump began to yell at me," Lin said to Smerconish. "He told me I had shit for brains. He told me I worked for a shitty newspaper and he said, 'What sort of shit [are you] writing?'"

According to Lin, Trump then hung up on her, called her boss and proceeded to rant to her boss and call her the a "c*nt."

Lin's boss offered to issue any corrections if he felt any part of the story was incorrect.

According to Lin, Trump said he had only read the headline.

According to the Inquirer's running list of articles about Trump, Lin only wrote one article about Trump in 1988, of which the headline was: "Griffin, Trump to Divide Resorts."

Before appearing on CNN, Lin wrote about the incident on Thursday for Pennsylvania news site Billy Penn.

Trump's campaign responded to her allegations with a statement to Billy Penn.

"This accusation is categorically false. I find it incredibly coincidental that this person's crystal clear recollection of one sentence, one word, spoken nearly thirty years ago just happens to coincide with Mr. Trump's surge in Pennsylvania. This is nothing more than an avowed liberal reporter who is trying to exploit Mr. Trump's reputation as click-bait for her tabloid stories."

Jennifer Lin did not immediately return a request for comment.