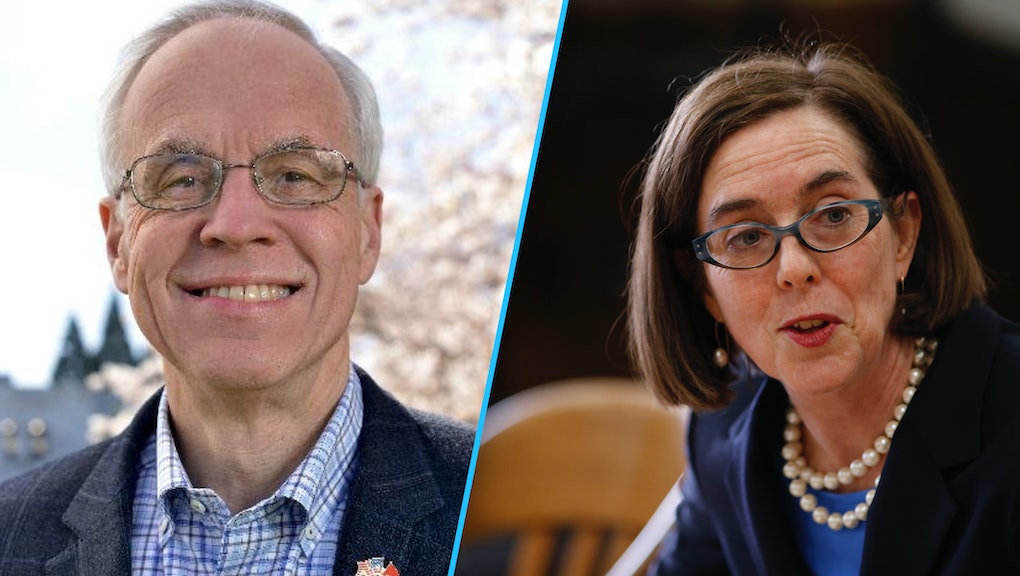 Another day, another male politician who misunderstands the nature of sexual abuse.

At a debate with Oregon Gov. Kate Brown on Friday, Dr. Bud Pierce — "respected oncologist and candidate for Oregon governor," according to his Twitter bio — suggested that well-educated women can't also be victims of sexual violence. After Brown said she had been a victim of domestic abuse, Pierce's very empathetic response, according to the Oregon Broadcasting Co., was this:

"A woman that has a great education and training and a great job is not susceptible to this kind of abuse by men, women or anyone."

Pierce's statement couldn't be further from the truth. The academic degree a woman has received has no bearing on whether she is victimized by men, as the campus rape crisis indicates. An estimated 23% of female undergrads are forcibly raped or sexually assaulted, according to the Rape, Abuse and Incest National Network.

Being well trained for a career doesn't preclude the threat of sexual violence, either — as at least 270 women who reported being raped while serving in the U.S. military can attest.

Neither does having a great job or being professionally successful shield anyone from abuse at home — just ask Rihanna, Tina Turner or Amber Heard. Or ask  Brown, who experienced domestic abuse: She's been a member of state legislature, Oregon's secretary of state, an attorney, a professor and an advocate for women and children, in addition to being governor.

The remark is yet more insensitive in light of a recent report highlighting some alarming trends in Oregon. Responding to a survey that the Women's Foundation of Oregon issued in September, over half of participants reported having experienced sexual or domestic violence. Almost a quarter identified as victims of rape.

"I know that any woman, regardless of economic status, can be subject to domestic violence and sexual abuse," Pierce said in the statement. "Sexual and physical abuse is morally wrong, and must be opposed with all efforts."

Pierce's initial argument isn't unfamiliar, though. In fact, it sounds a lot like that put forth by the Trump campaign. The Republican candidate recently dismissed sexual harassment in the workplace as something women can avoid by simply switching jobs or companies. Trump's son, meanwhile, has said a "strong, powerful woman" wouldn't "allow herself to be subjected to that," meaning sexual harassment.

Pierce, formerly a Trump supporter, walked back his endorsement in September, citing personal disappointment that Trump failed to unify his party.

In his statement about his domestic abuse comments, Pierce apologized to "anyone else who may have taken my comments the wrong way."

What is the right, or even another, way to take them?