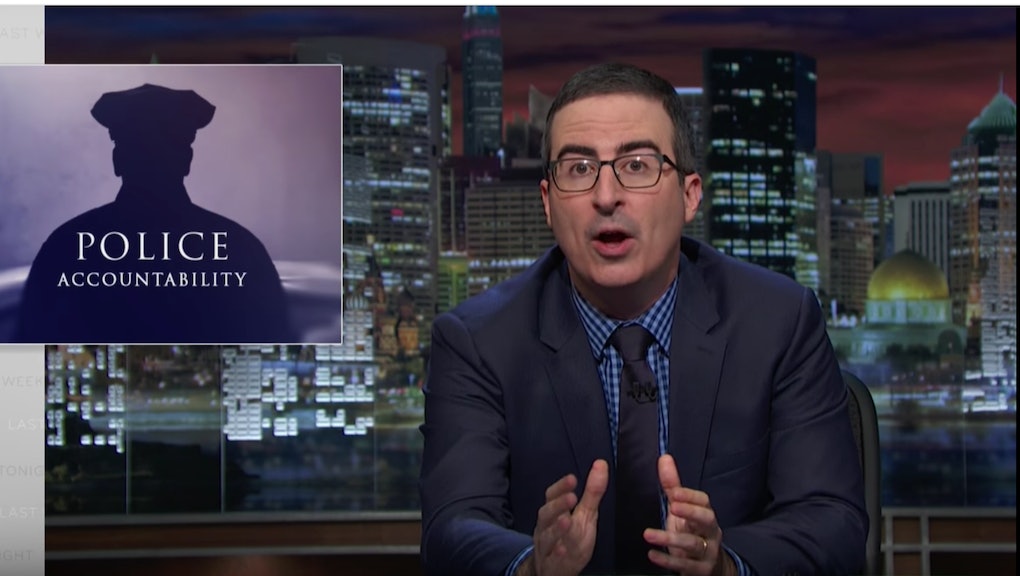 Sunday night, Last Week Tonight host John Oliver used his platform to address the ongoing issues of police brutality and accountability in the United States. As Oliver explains, police often have to deal with "humanity at its worst" — evidenced by an absurd clip of a belligerent man getting arrested in Montana while shouting "Ron Paul 2012." But that doesn't absolve the police of accountability.

Oliver points to a few examples that have sparked the Black Lives Matter movement, such as the fatal shootings of Tamir Rice and Philando Castile. But these incidents are frequently touted as the fault of a few "bad apples," rather than a systemic issue — a point to which Oliver disagreed.

"Snow White wasn't afraid of apples before she took a bite out of that one really bad one, but I'm telling you, the next time an old lady comes at her with a piece of fruit, Snow is going to get the fuck out of there," he said.

However, weeding out the bad apples is a challenge, as Oliver notes with a few examples. It's difficult to police the police because there are nearly 18,000 departments across the country; police officers are dissuaded from calling out the unlawful actions of their peers or they're labeled a "rat;" and prosecutors work alongside police all the time, so indicting them is awkward. Or as Oliver put it, it's the equivalent of Mary J. Blige singing "American Skin" to Hillary Clinton.

Clearly, then, the issue can't be summarized as a few bad apples on the force: It's part of a larger problem.

The phrase isn't "it's just a few bad apples, don't worry about it," the phrase is, "a few bad apples spoil the barrel." And we currently have a system that is set up to ignore bad apples, destroy bad apples' records, persecute good apples for speaking up, and shuffle dangerous, emotionally unstable apples around to the point that children have to attend fucking apple classes. You cannot look at our current situation and claim that anybody likes them apples.

Watch the video from Last Week Tonight below.